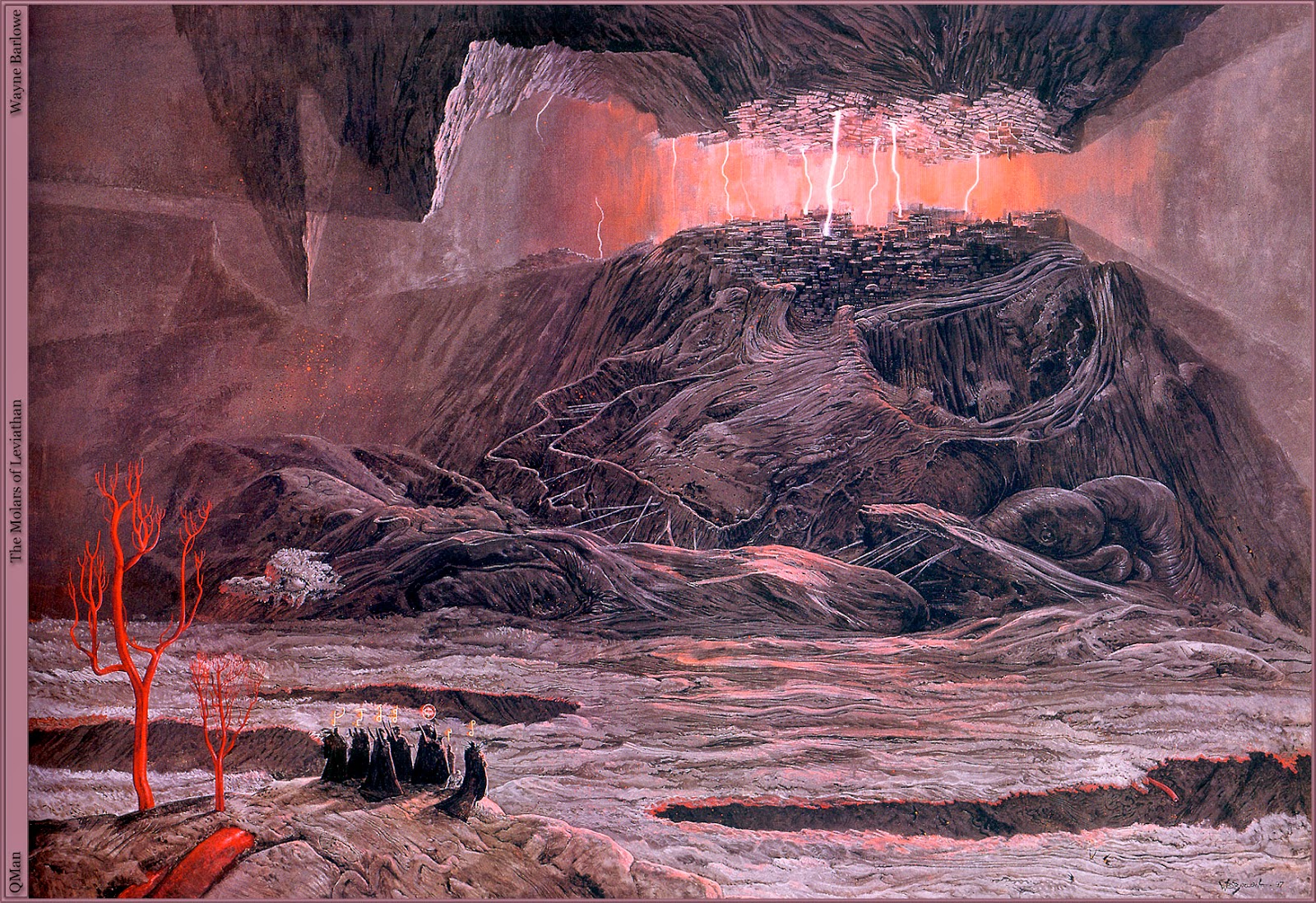 After a night in the orc love hotel with the big bath full of orc milk with his wife Olga, Acula received a letter from a fawning ruff wearing page orc from the king. Couldn't read it but Nahme's bodyguard orc did. Wa a invite to court. So all went to court where page orc told them court manners. Into great cathedral throne room where 100 old orc priests waved incence burners and hundreds of guards with scale and halberds protected the hug bloated king. The king liked Acula and his wird friends and pets and Acula told him he couldn't speak orc as he was raised by humans. Acula came off as charming, but not too charming, greedy and not too bright. Just the sort of orc the king liked. Acula gave him deed for the orc swamp village he conquered and a grenade. King lit fuse and threw among the old priests and laughed as they scattered from blast. He asked for several more till Acula ran out. Gave the party a quest to investigate the upper 35 floors and see who lived on upper levels past the haunted bit and the fungus filled bit.

Offered titles, a palace in the orc nob district and their weight in copper. Nahme said she would come despite this "reward".  So orcs let them in one of four great doors and told them the password. Warned them floor full of rebel orcs, undead, gremlins and goblins that escaped the kitchens.

Went up stairs into huge plaza and when halfway across Nhame the relic bearer had her lamp boy thief spot ogres coming a them. The ogres where disgusting fat white eyed green glowing skinned mutants with tentacles. Several fell to missiles and the Tako octopus sorcerer got slapped and the thief bot got tentacled twice and lifted up. All fell on the mutants and when the boy passed out from shock the ogres where sliced to bits and full of arrows. Ogres had sacks of gold and throwing rocks the party pleased by.

Went forward into a huge elevator and stairwell hub in centre of citadel that went all the way to the top. In the middle were huge cages for mass transport and freight while in the middle of the big elevator was a hall of smaller lifts. Three of the cage doors were down with corpses inside and the corridor in middle was fungi forest filled.

Lifted cages carefully and found bodies had starved in here trapped and eaten each other before dying. Found nice trinkets, exotic knives, a big locked book of elder age law, make up tins and the Tako adopted several wigs. Dark elf's pet bugbear found a Iron pipe of black lotus and lit up. Also doubled as a club.
All cautious to look for ceiling monsters and surprise undead. Looked at the fungi hall and discussed using Acula's incendiary bombs but Tako cried out in undercommon and little blinking eyes looked back. Mushroom men from inches tall to huge 8 foot specimens with adorable faces gathered to talk. They were very friendly and Nahme adopted one on the spot. They didn't mind as would help their kind spread. They offered them ogre corpse and community helped party drag ogres to fungi corridor an fling torn scraps and gore everywhere the way they liked. Promised to grow party some magic shrooms on return.

Into the nob district where a great hall with 12 courtyard gates leading off with skeletal dead guards. Acula collected guards hats. Found one court with fungus garden where mushroom folk knew everything about last encounter by message spoors they were all carrying.

Found a new orc padlock on a gate with recent use so went to have a look. In stables Acula sneaked up to have look with thief boy. Wargs attacked and thief got a backstab in while four mauled Acula. Rest of party rushed in and killed wargs.  Found small torture chamber with dead chewed orcs on apparatus including one burst open on wrack.

Crept into servant quarters and found kitchen and unused rooms and store room. Found a few trinkets and a old explosive barrel trick. Went upstairs to palace level and found two doors and open passage to open area with balcony around the below courtyard. Heard orcs drinking. Checked other door first to empty room then burst in killing orcs noisily with Acula's last incendiary bomb and melee. Heard commotion next room and burst into once sitting room now a evil orc shrine. As shaman fled his dozen zombie orcs attacked. Was a bit slower but heroes killed them and charged. Next drawing room four orcs with heavy crossbows covered the shamans retreat. Acula took brunt and rest came in and killed the orc heroes.

Found next room with cowering she orcs in chain bikinis cowering under sheets. Left the party she orcs to guard and rest went to look shamans room while Acula and Nahme came out other side of courtyard. As they crept around ten orc archers popped up from behind opposite side of courtyard with bandit chief behind them. Both  heroes copped arrows and Acula returned fire twice as fast and deadly, while Nahme rushed around courtyard balcony edge and attacked them. While a lone orc dropped bow and tried to punch Nahme and other archers fell from Acula's awesome arrows, She pushed past him and took on the mighty chief. The Tako stopped looting treasure and ame to see all the fuss and also helped fire arrows. Whole party experts at firing into melee so the lone chieftain valiantly battled Nahme while being perforated like a pin cushion. He swore to eat her eyes and make her his slave and when he fell she clumsily kneed him in the face.

Heard shaman in his pot and pan armour so while tako went after him and Nahme sprouted her angel wings and flew down to lower level to corner him. Acula went to see she orc harem and they winked saucily at him. Before he could react the party she orcs set on them and beat them to death revealing under the sheets the had knives waiting. The shaman had a sound beating and fell dead in his crappy armour. The party took the pile of cash and several relics.

Returned to lower levels after giving bodies to shroom folk tribe. King gave reward for shaman and bandit chief heads. Orc temples paid up for the collection of orc magic items. Kept bottle of stone fire oil with fuse. All spent time training, learning new spells and skills ready for next sortie. Acula at last could speak some orc which is handy as he had been one for a few weeks now.

Posted by Konsumterra at Friday, November 21, 2014