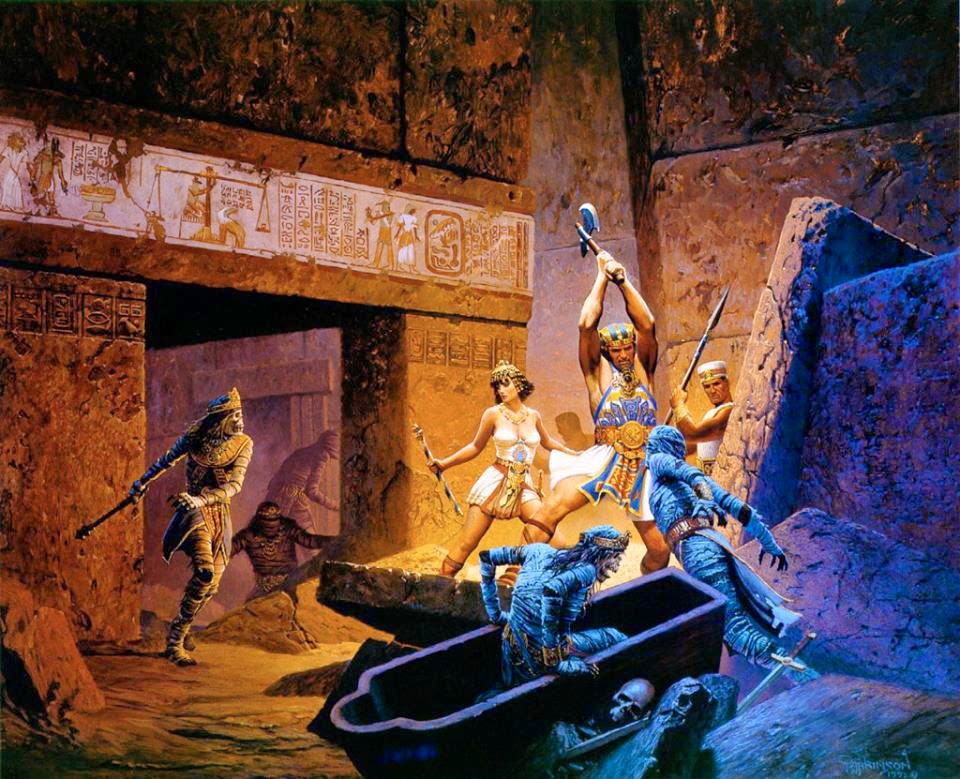 So the heroes arrived in port in Egyt and established a new trade post. Now they had trade posts everywhere except Elam and Uratu. The ans was pleasant and they enjoyed luxury and peace. Went hunting and battled lions, a giraffe and a flock of Demon birds! The local hunters seemed not to think Ostriches were so evil but the heroes knew better - they were the spawn of the Anzu bird. Saw the Sphinx and Pyramids. A giant cobra almost got Kull. A demon with a lion body with a cobra coming from it's neck attacked by night. Managed to cut snake from body and had two monsters to fight instead but it eventually died chopped into many small bits. This upset the hunters a bit so party found their distractions elsewhere from killing mostly  dumb animals.

Eventually decided to visit Toth's family in Karnak. A week of travel to Thebes on a pleasant river cruise. Once there he met his family he had not seen since being sent to join his father in Babylon as a child. He met his "baby" brother who was overjoyed to see them. Recognising them as great adventurers he invited them to Karnak where he worked with a clan of grave robbers. He also mentioned you could buy ancient black manuscripts there.

So all went to Karnak and spoke to some Nubians charioteer scouts from the south border on the way. Got a ferry over the Nile and towards the city of Karnak. Thoth's brother led them through a fringe village of tomb builders which pleased Toth. In the mountains nearby was a tomb valley and the craftsmen made a living building ombs anc crafting grave goods and art. Of course others made a living robbing them and selling old grave goods as new. At the boys criminal friends home the gang met the heroes and offered them their barn to stay in. Sobek who loved animals stayed in the barn the rest set up tents, Ariana bossed Sobek into making her tent. While shopping for forbidden papyrus scrolls found a half brother who had been missing from the clan for a year. He was a scribe and was travelling and studying and happily rejoined the party. The night before the trek, Toth inhaled the sacred fumes of incense and dreamed that treasure awaited. Ariana's wind divination warned of death.

The band were weary of heroes but offered to take them to a forbidden valley and cursed tomb. As they marched to the valley the groups sized each other up. Toth's brother hoped he would impress his gang who clearly thought very little of him. Scorpions were everywhere.

Found a ancient Mustaba style slab tomb, pre dating the Two kingdom era, with much simple art. Art on door proclaimed was tomb of Unas the untouchable who claimed to have eaten the gods and claimed their power. Kull a champion of Marduk saw similarities to his god's claims.

A gang member smashed the door down and the leader decided to leave the boy and several guards outside (hoping to use Toth's brother as a hostage). Inside was more simple tomb art art pre dating the Egyptian style. At end of hall was a another wall but this barrier was a hastily erected and crudely plastered over. So the gang smashed it down. Kull boldly walked through and was struck by a horrible wound that burst from under his skin crippling him. While he healed himself Pek warded himself from magic and stepped through. It didnt work but he managed to survive the wound and then smashed around the door frame looking for wards. Found thee statuettes and broke the ward. Two more alcoves were passed and wards gathered but each was weaker. Finally at end was another plaster wall. When smashed hole through it. As one of heroes could cast a wall of darkness he did not fear it and finished the smashing and wennt through. Sobek had collected all the warding idols of female figurines with crowns.

Inside were two huge crocodile headed sarcophagi and a jet black smooth faced sphynx and two more doors. All thought the Sphynx creepy and several robbers backed off. Sobek stared at the face and went into a trance and several others tried to drag her out. Kull started to cast a spell in preparation. This angered the tomb spirits who awoke the crocodile Mummies. A huge brawl broke out. Ariana now afraid of big monsters she cant seem to hurt jumped through the wall of darkness. One bandit went insane and stabbed Kull. When a party member hit him back the bandits all turned on the party and several fled. Ariana for some reason behind the wall of shadow struck them dead. Others tried to Drag Sobek away but she was busy in a dreamland conversing with Nyarlathotep. He offered her advice and magical power if she needed it. The bandits and mummies were all finaly killed but everyone injured. Ariana went outside and shot all the guards and Toth's brother. Toth eventually showed no concern as his cult defended the underworld and practised treason as a matter of course. He was planning on killing his brother and all his friends.

Sobek recovered with a new spell the dark god gave her to call him. Yay!

Two more tunnels were left to explore. Aparenty the Tomb of Unas had been moved by the cult of the Dark god. One passage led to a empty shrine tomb of the Black Pharaoh Nophru Ka. Art depicted suffering, monstrous gods and the revolting priests who destroyed him. Unclear if past or future. Obviously post dated the construction of the tomb. The second chamber depicted a strange city of wonders with great towers, men flying in sky chariots and a future king. Found several strange relics including potions. Thinking them ambrosia of the gods several drank it and found themselves in a strange state where they did not breathe. Also found a black papyrus book and a strange metal coffin with alien sigils. A large disc on the front with symbols and moving rods at different speeds. A smaller series of discs seemed to be some kind of lock. Aslo were several enchanted daggers, a mace and a crumbling bow and arrows.

All the treasure was carried away to Karnak. They were told of a rich merchant interested in such goods. After showing treasure to his servants they were allowed in and met the corpulent huge merchant. He seemed pleased and offered the to rest. The golden potions he gave them plenty for and the empty ones. He explained they were potions that allowed wizards on star born stteds to traverse the heavens. Party grunted - nobody interested in that. The great coffin he offered a talent of silver (30kg). Enough to make them allrich. Sobek thought this was odd and suspicious. Toth was keen to sell. The merchant offered them a night as his guests to decide and the barbarians were left to guard the coffin in a vault. Sobek pleaded the should keep box but merchant explained would take a life time of study and none of party especially barbarians would ever understand the box. They did sell a dagger and the mace and paid the merchant to use sorcery to mend the bow and enchanted arrows which Iltani kept.

So in private rooms the nobles rested. Ariana tried wind divination that said the box was a great mystery and dangerous. Sobek called the dark god who took her spirit to his palace across the universe and told her of the power of the clock to travel in time and space but he could teach her the same with witchcraft. He also told her the current combination. Alarmed she went downstairs to check on the barbarians who unimpressed at being called stupid were taking turns at opening it. Pek managed the combination. A crack appeared and the lid began to open. Heavy breathing and tentacled fingers slipped out and Pek jumped on the lid. A horrible scream from within as the lid shut and the lock re set itself.

Unknown to them it was a poor time traveller with an alien bodied gained on his misadventures.

In morning The exchange was made and all party now rich beyond wildest dreams. Mansions, slaves, even a small castle were within reach. They were keen to go home and spend it.
Posted by Konsumterra at Saturday, November 29, 2014