Babylon BRP: Sex rites in the garden at the dawn of time 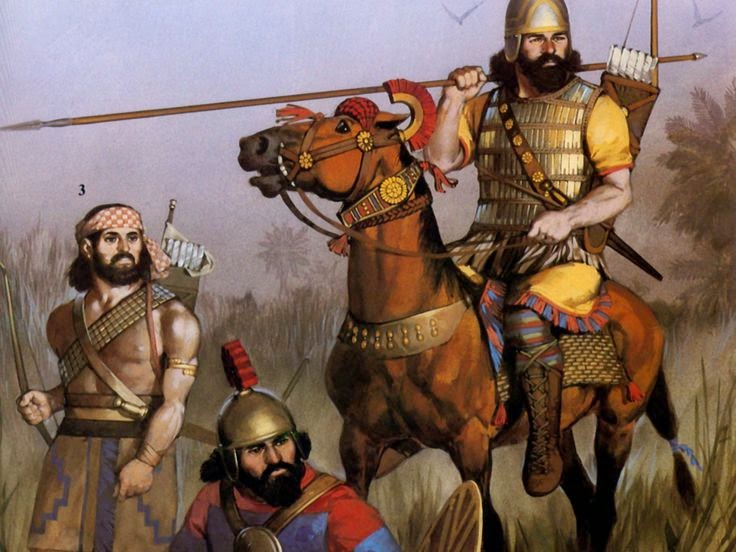 So in the gardens of Dilmu the party sat meditating with holy incense and followed the rites to enter the dreamlands as the Priests of Enki had advised them.

Awok in a great colourful garden where every plant was like turquoise and jade with every flower and fruit brilliant as precious stones. Were no stones or sticks or dead leaves the sun sat in the peak of the skydome watching them. All were naked with nothing. Ariana made herself a loincloth from some leaves and a vine. Pek the barbarian climbed a tree and saw beyond the garden was a great plain of silt deposits and the world seemed unusually flat.

Eventual heard water so found a crystal clear creek with nymphs playing. The nymphs were friendly but ignorant of ideas like direction (we are at the centre), being lost, what a human was, coming from anywhere and were pretty uninformative. They were playful and encouraged party to bathe and play and even splashed the dour Toth. Pek offered to teach hem to wrestle. While frolicking it was brought up that they were daughters of Enki born after he had had sex with then eaten their mothers (also his daughters) who were tasty herb nymphs. Erishkigal had got miffy so Enki had given birth to them.

"So where is Enki now?", the visitors asked.
"Oh just over there", said a nymph pointing.

Sure enough there was the great god, larger than any human 8 foot tall with a great beard of Lapis Lazuli drunkenly asleep under a tree. Next to him were two empty clay jars, each a talent load for a man. Amazed to see one of the greatest gods asleep but were also kind of afraid. But Ariana wanted to awaken him. Failing that she collected some of his drool in a fruit peel thinking it could be a potion.

So the party except Ariana and Sobek her chariot driver began having sex with Nymphs even Lady Iltani the Ishtar worshipper. After a bit Enki awoke and all stopped to hear his amazing wisdom.

Various heroes asked about their gods and Enki explained they were in the heavens. Sobek asked what to do about Tiamat and the gods reply indicated they were indeed in the dawn time and Tiamat was still alive. He fancied Ariana but she wanted to save herself for her husband or her own god. Sobek was keen as she was pet and baby mad but Enki didn't want to touch anyone with less than superhuman beauty. Enki wanted to have sex with them both and Sobek begged Ariana to give into the gods lust. She sighed and the two women got down to business but Ariana craftily avoided being impregnated by dodging at the last second. Eventually he sobered up a bit and commanded them fetch him beer.

"Where do we get beer sir?"
"From the Beer goddess of course"

So they took empty beer jars and marched onto the muddy alluvial plan towards a distant shack. On the way they saw a huge dead tree. The first dead thing they had seen yet.

In the top of the tree was a great Imdugug bird, kin of the Anzu bird with a eagles body and a lioness head. In the bough in a hollow was a nigh hag with horrible hairy bird feet like an owl. Chewing on the roots was a small dragon gnawing angrily on the roots. Party avoided it and kept going with glares from the beings.

Arived at the shack where a mature woman in robes leaned on the bar resting her head in her hand. She declared she was Shulgi the bartender goddess and offered them beer for service. As party naked they had nothing to trade so she told them to make her a bed. They asked how and she told them to cut down the tree and make the bed from that. She gave them a bronze hatchet and instructions on how. Sobek cut off her hair and wove it into a sling. In the hut were some nice river stones for missiles. Some others grabbed stones to throw. Iltani and some others chipped stones into crude cutting tools with craft skills.

Back at the tree Kull the Marduk champion informed them all he had a spell to command dragons. So Pek took the axe and started to chop the tree and the others hurled spells and rocks at the bird as it buzzed them. The dragon (more like a crocodile with horns really) awaited below its mouth open to eat an other tree guardians who fell. Toth climbed up and smashed the hags leg shattering it and knocking her out then tried to reach in to grabed her hair and pull her out. Pek kept chopping and cast many charms on the axe to ease the process. Sobek used her sling and eventually shattered the birds legs. Toth finally grabbed the old woman anf hurled her into the dragons awaiting maw. He gobbled her up in two big gulps. As the lion bird menaced him Ariana used her jump spell to try and leap at it it then got idea of casting on the dragon and it leaped up 12 cubits and snapped but missed. The bird was intimidated and backed off and Toth came down to help pelt bird with stones. Kull said when spell wares off dragon will attack so he positioned it where tree was to be felled. Finally bird fell and kull grabbed it and threw it to the dragon. The tree fell pinning the dragon and all helped finish it off.

Toth was most hurt and Ariana was hit by spell also from the bird. Party carved a bed over hours the sun never moving from the apex of the sky. Carried the bed and dragon and bird skin to the shack and the goddess was pleased. She got them all drunk and filled their jars. She took the spittle Ariana had collected also and let them keep the axe. Iltani realised the goddess was an aspect of her own goddess Ishtar. Sobek was told she would bear a nymph. As she had given birth to a Satyr earlier this was a nice set.

Back in the garde of Dilmun Enki was pleased to take the beer and presented Ninhursag the great goddess, his lover and sister (gods dont worry about rules they make for mortals) and Ariana was a bit disgusted. She knew they were from the waking world and told them to visit her great enclosure in her temple in Nippur. All drunkenly celebrated and watched the gods play a game to see who could make the most useless being by damaging the moulds they used to cast humanoids. Enki found uses for all the goddesses malformed beings - the blind a masseuse, the sterile a prostitutes, cripple a scribe and many more. Enki won by creating old people, the hopeless, senile beings were incapable of any use so he won. As the gods squabbled drunkenly, the heroes awoke suddenly in their bodies fully equip with Kull's war dog barking happily.

Left Dilmun and it's holy temples and funny creepy fishermen who spied on them. Were blown b great wind demons at sea and were very lost. Arrived in the area of the River Indus and stayed for ship repairs and food. Met local cults, hunted some lions and gathered exotic trade goods and spices. Set sail and made it back to Eridu only three weeks late. Marched to Nippur where the temple priestesses gave them each earth power. A sort of magical reservoir they were told would save them if their souls were drained. At first everyone thought this sounded good until priestess said the Goddess knows they will need it. Then everyone reconsidered the wonder of having their souls destroyed or severed or stolen.

Returned to Babylon and rested an month. Father was pleased with their progress and their preparations They had now been from Indus to Anatolia, most of the civilised world. Only Egypt, Minos and Uratu to go and they will have been to every known civilisation on earth (except China). Soon they would have might to enter the underworld to plunder its secrets and power as he planned all along.
Posted by Konsumterra at Saturday, November 08, 2014