Exile Log: A funny thing happened on the way to the underland 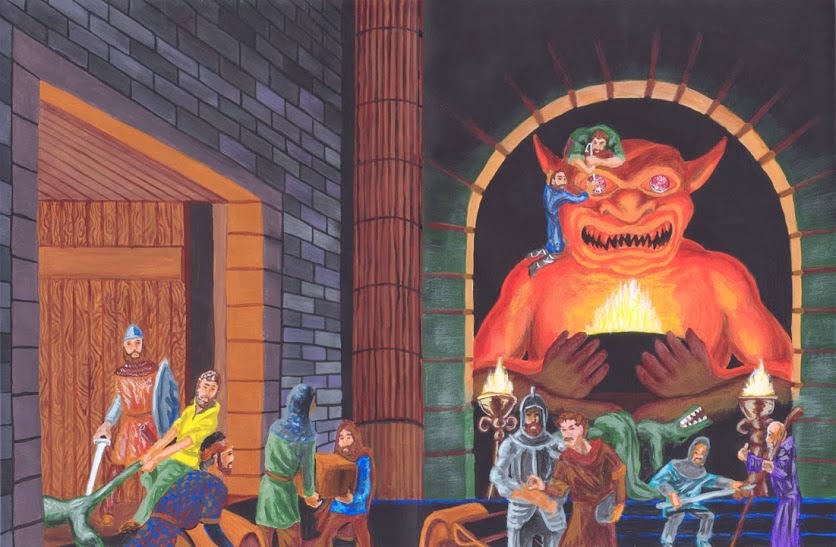 *Starring*
Acula a human archer from poacher family with orc wife Olga and several pack orcs
Nahme the angel with her pet orc lady and lamp bearer thief lad
A Tako octopus lad sorcerer with pack orc
A Dark elf psion with a bugbear drug dealer, a riding spider and a pack orc
And a donkey full of food, rope and other stuff for a underground romp

So from the brutish court of the orc king the party went to a village near the sinkhole to the underland the returned dark elf told them about. The villagers in their wattle and daub domed homes (wicker with mud walls) had been ordered to be hospitable to the party on pain of death. Had a cheif hall, a fighting pit, dricking hall/trade house and a shaman hut. Filthy orc kids, pigs and dogs and slave goblins wandering about the muddy laneways. Acula visited the shaman who offered to turn him into a orc and Acula jumped at the chance. While he lost charisma he gained strength and his orc charisma was 7+his level 5 so over all he was now more attractive to her. His other wives might complain his allies suggested but Acula was not a man to think much. He was more concerned that the secret police might be anti orc but apparently they liked orcs.

Party got some drinks and heard of sinkhole area was forbidden for kids to play in and mostly avoided. Acula went to fighting pit and beat up a champion of the chief which made Olga happy. Rest of party over orcs but the supply base value of the muddy shit hole was handy.

Arived at the sinkhole with extra helpers and Acula got lowered down. Nahme could have flown down but she was only in habit of revealing angel form for impressing people. On a leg on way down was a orc skeleton with a broken leg and bow who was trapped here long ago. Deeper into a huge cave covered in tribal cave art and hundreds of giant mammal skeletons, thousands of years old. Acula climbed down and avoided the well and scuttled over the bone heaps to look at tunnel entries. Others came down too but in process a cave rune was activated and skeleton wolves began to arise. Everyone ran into passage and pulled back letting Nahme, Acula and the orc warrior women to hold the undead back. Acua hurled several grenaides which missed but with cave thick with dead turned out OK.

As the wiped out the wave, deer skeletons arose, bear skeletons, sabretooth skeletons and the party were a bit forlorn at one point as they all pulled back deeper to restrict the enemy. The party usual heavy bow fire was less effective on skeletons but the orc women flails were fine. Eventually a great mammoth came charging but couldn't get to them in narrow cave. Orc women were hurt and party finished of the mammoth and grabbed his tusks. Looted animal teeth, horns and tusks and had taken to surface to be kept in supply village. Tako helped loot crap from the well. Orcs offered to take care of donkey and cart.

"By take care of you don't mean eat him do you?", asked Nahme.

"Oh no", promised the orcs who rushed home for a BBQ as they did not think would ever see party again.

So into depths and into a great passage with graffiti dating back to pre human times. It was one of the great highways said the dark elf who started stuffing his face with lichen and edible bugs, seeded here for generations. Acula tried some and thought it tasty with his new orc taste palette.

On way heard singing in odd language which by default realised  was dark dwarf. Met the evil dwarfs and traded goods for three pack orc loads of iron ore. Dwarves told of the dwarf trade town and mentioned several their dwarf holds.

Met band of savage white orcs from the deep, cooking dark elves on a spit. Ofered to buy party dark elf but declined. Managed to camp with the bastards and Acula had a fight with the leader over his wife. Orc boss threatened to kill acula, skullfuck his corpse, eat him and take his wife. Acula beat him to pulp and took his magic stone club. Olga was all gooey. Luckily didnt use magic club as was cursed of course. White orcs thought him mighty and party was able to rest without being eaten.

Went on and found town and got admitted as traders. Swapped some magic weapons with ones more suitable in most open magic weapon market they had yet to find. Mostly bad dwarves and some not so bad ones but were offered to b lowered down b a ancient elevator into the great Underland. The iron cage was most intact of many, once used for large scale armies to enter the deep. Was a bit rickety and a fee of 100gp still seemed like a good deal

Dropped into the depths and saw a great dark elf plateau, the pink lakes, great fungus swamps and a tower which supported the great cold magenta beacon that lit the land from the heart of the land.

Settled in a broken, craggy volcanic waste, very hard terrain. The elevator arose into the sky and at one point slid about 10 stories due to a malfunction. The the link to the surface was gone.

Marched with orc trail scouts south where seemed to be a ash grey plain and easier going. These were orc lands. Heard squeak from the sky and saw a great horror fly at them. It was a chimera but made up from a cave bear sized giant rat, with extra mole and lizard heads and bat wings. Hit it with arrows and it breathed great swathe of fire over party injuring all and vapourising several orcs and supplies. Olga fell and Acula hurt before it was killed. Worse beast they had ever battled and a bitter taste of more horror to come. Party made camp to rest.....
Posted by Konsumterra at Saturday, November 08, 2014