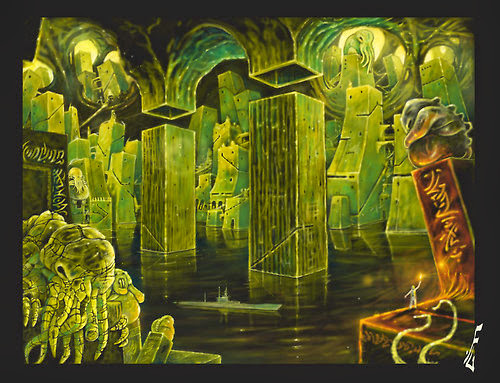 So after the smoke of the strange rat-mole-bat-lizard chimera the party were sore and crawled into a crack to rest. They debated directions and considered which citadel to head for and Nahme's lantern boy-thief detected smell of cooking food. Headed for smoke and saw a cliff dwelling with orc domed huts. When brown skinned orc saw party they retreated and pulled up ladders. Nahme used her friend spell relic and charmed them into inviting into fort.The Dark elf bugbear buddy saw feilds of narcotic mushrooms and licked his lips. Inside the dun skinned orcs wore masks and staggered and slurred from perpetual high. They traded some ore in return for riding and pack beetles that could also burrow. Got directions and decided the greenskin orcs of the swamp best to visit. Got some rope woven from orc womens hair to replace that lost when orc pack bearers turned to ash from chimera.

Crosses the wasteland quietly and came to edge of swamp. Knew thety would find a village with a boat and guides and saw tribe stockade on Island. Got exited an headed towards it and saw som big gold eyes pop out of the swamp. Thirteen huge swamp frogs as big as buffalo hopped at them, nipping their riding beetles and most of party. The Tako was swollowed but he cast a fire shuriken as he knew secrets of gestureless casting and the frog spat him out. Another ate the dark elf but his bat familiar mind blasted the frog and the bugbear dragged him out. Killed most of frogs and realised corpses good for trade.

Got closer to the green skin stokade and friendly orcs invited them in. Acula the archer, now a green orc and his orc wife came in. They saw orcs ready with nets, bolos and mancatchers and acula dodged a net from above. Bolo's hit many party members and Olga got her feet trapped and fell over. Acula turned and killed fout out of five bolo users and got a mancatcher get him. Olga broke free and Nahme turned fully angel and flew over to the fence top and killed last one. Others had jumped down with clubs to get Olga and Acula. Four more mancatchers got him before party charged in and wiped out most orcs and rest surrendered. Boss and harem came out and said was dirty of party to kill them when they only attempted to enslave party. The cheif abused Acula who challenged him to a fight. Nahme thought dueling a inferior was lame and walked off. The dark elf healed Acula and the orc shaman blessed his chief. Acula won but lucky orc did well early on with a boosted strength.

Orcs all begged for mercy and to serve Acula in the orc manner. Shaman turned dead into zombies and dragged inside frogs. Acula mated with orc chief wives and demanded a boat to citadel. Said he would return. The raft took them to the shambling orc town at base of citadel which pre dated orc's existence in the world. Tower was crumbling and fungi covered. Went though the causeways and walled islands connected by rope bridges to the common market at the tower gates. At market they bought arrows with frog flesh. Bribed way inside to better market where foreign orcs with better technology dwelled. Upper level had inns and brothels and third floor was noble housing and fourth had kings lair. Uncertain how tall citidel was as it went into mists and possibly the great Underland ceiling. Had a basement and the Tako octopus lad explored wells, well cleaned and connected to whole citadel. Clean bit made him wary. Acula went to orc love hotel with his wife and chose a bath theme room and paid for it to be filled with orc milk. Others went to brothels.

First was staffed by slave albino subterranean humans and Nahme bought one. Next had orc's and Nahme bought four youngest in hopes of reforming them. Next brother was full of grey gnomes of the Underland who lived longer than orcs and had been in pimps family for generations. They cost too much for Nahme. Last one was a undead brother where shaman pimp offered to cast illusions for a price but explained customer rates and welcomed abuse of the girls he dug out of the swamp and animated. Party horrified and went to hotel district. Found a strange creepy human looking inn keep who offered rooms that were clean in monster empire style from before humans were a major race. Innkeeper was a serpent man shape shifter and explained many customs of land below. He showed them map but refused to sell it but let Acula make a crude copy. Explained some history of the domains and territories and citadels.

Were interested in exploring ruined sections of green orc citadel or possibly going to the lost city plateau.
Posted by Konsumterra at Tuesday, November 11, 2014