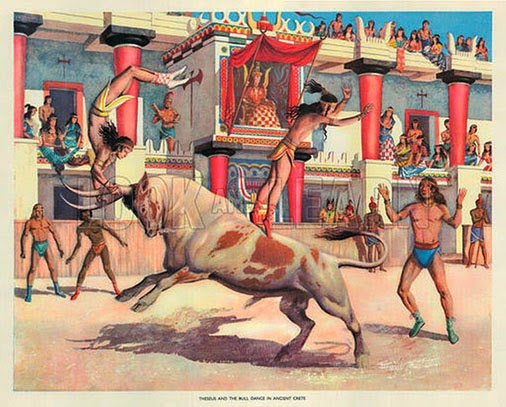 So settled in Knossos after exiting sea voyage with giants and dragons and the wrath of the Gods. Ariana was home and saw her family and beautiful twin brother.  The heroes set about setting up a trade outpost and before long were invited to see king Minos. Slightly wary they mrt the king who invited them to feast and tell him of their travels. He was very amused and invited them to stay. Called for their servants to gather their possessions for the stay. At first being in the greatest and richest court in the woeld seemd ok but was soon clear they were not allowed to leave. Spent days at sport, Sobek spent time in the menagerie and Toth looked in libraries. They heard of sacrifices, the Labyrinth and beast within beneath the palace.

Ariana came across the workshop of Deadalus who was also a prisoner with his son. He viewed the gods as just great lying sorcerers who obtained magic in past when more common. Magic he explained was just a science of underlying principles. Ariana looked at his incredible inventions including a rotating steam sphere, a mechanical device to determine the location of planets and predict eclipses. Ariana spent days here and slept with his son Icarus. She heard about the device he built to disguise the former queen with a hollow wooden cow and how the minotaur came to be. She heard of secret entries to the Maze but Daedalus recommended safer while the dozen sacrifices loose in the maze. She asked Daedalus to join them but he had his own plans under a great oil cloth. Her brother kept inviting her to join him in dallying  with palace eunuchs but she was too busy.

Over days Sobek sent messages outside the palace through servants she befriended. Some of the heroes met the sacrifices, best youths from one of many cities of the mainlands of Greece. They were being anointed and prepared for sacrifice. Pek tried to seduce the maidens as they wouldn't want to die virgins. He got a few kisses at best. One of them was a lad named Theseus who had infiltrated th group to kill the Minotaur. Ariana made friends with the local princess Ariadne and met her sister Phaedra and the girls met a witch of Hecate on tips to help Theseus.

On the fateful day the heroes were at the ceremony where the sacrifices were to thrown into the labyrinth. Ariadne had hidden a sword and thread for Theseus. The heroes got out of the celebrating feast and had taken their weapons and armour hidden to Daedalus's lab earlier. They entered the dungeon and followed the instructions of Daedalus and warnings that the walls moved. Pek and Targ asked why not just kill the beast but Iltani reminded them the monster was a son of a god - the bull was Posieden who already hated the party. Pek said all great onsters are divine and great enemies make a man great. They had been avoiding the bellows of the beast but when they heard screams of the sacrifices they went to see. The great beast was wearing bronze plate armour and was killing several prisoners, They charged and hammered the beast. It had a pole axe and lashed out with kicks maiming Kull at one point who fell but healed himself. Pek had his armour breaching spell and dealt it some great wounds but it was a long fight. Theseus came and attacked it's back and several heroes were in doubt they could do anything.

The beast fell and theseus claimed the head Sobek complained as they had done all the work so she took a horn when thesues insisted would let him overthrow Minos. Besides he had divine favour so wouldnt be punished for the kill as gods told him to come here.

As party fled the secret doors leading to the outside, their servants met them and they all fled to harbour. Arianas family were happy to run the trade hall for the heroes clan. Arianas pretty twin joined them as they sailed for Egypt, land of Toth's kin. 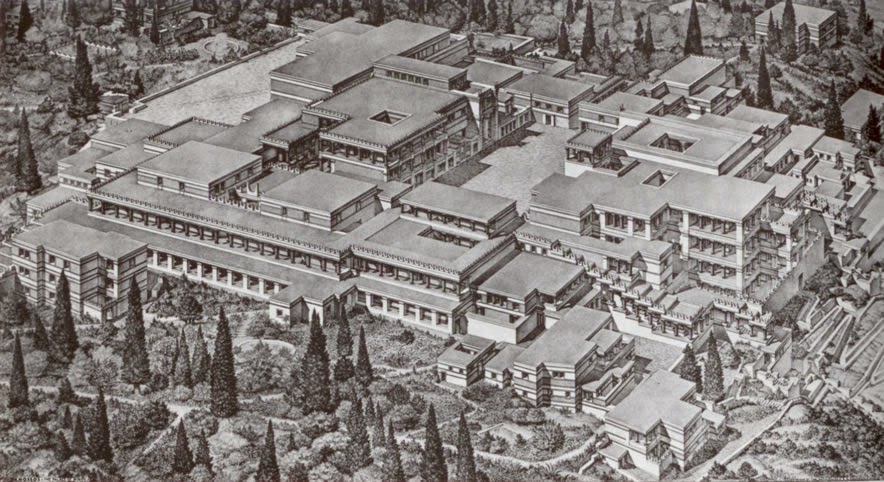 Posted by Konsumterra at Saturday, November 29, 2014