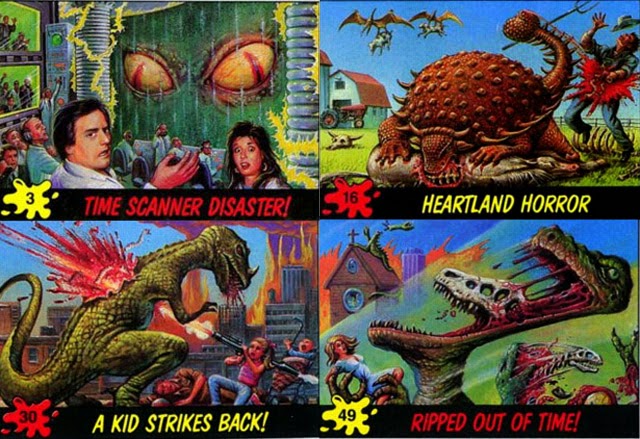 So less players than lst session and proving tough to make player dependent plots with characters changing and variable rosters.

So this session party sent to spy on lab that had been sabotaged in a country town in outback South Australia. The Uni lab had a micro accelerator trying to send a proton back in time a nano second to help build a time travel detector for the government.

The Traveller - a alien time traveller and agent of APIO the government super spook monitoring agency.
Titan - a kid girl genius in a battlesuit who for this built a android body and stayed in battlesuit in van.
Tank - a Lemurian sponsored battle suit builder with superior human attributes and power to alter elements. Wearing a Lemurian flesh suit disguise.

So they arrived together with Tank in disguise as a techie, Titan's life model deco as a computer tech and physicist and Traveller as new assistant security chief.

Arrived and shown base by managing professor and set to work. Tank upset everyone by quartering the size of a fuse device for the accelerator and the bos was pleased of his section. As co workers got grumpy he turned on his super charm and helped all of them earning himself popularity and co workers taking him to the pub after work.

Titan got busy discovering someone tapped into base and installed a remote link to sealed system. Also tampering of bae security footage. With the Traveller determined lots of random changes to camera logs as to make harder to find culprit. Discovered someone attempting to hijack Titan log in and kicked them out of system.

Traveller detected a burst of unusual signal but no leads as to where. Titan heard of Professors private lab and power drains.Had a good time at pub making friends. Looking for staff to poach for his own company. Titan looked about own and heard town drunk screaming about monsters. Took him to police then searched the area and found giant possible dinosaur footprints. Heard the power plant and fabrication section manager fight with professor.

Traveler spent most of night searching centre and got abused by proff and chief of security for trouble.

Next day all worked on the next test and checking for sabotage. Tank convinced fabrication team to build him a spy bug and looked at secret lab. He didnt notice the pentacle array of force feild emitters.Titan found someone trying to set up an alternate plan to send proton back 165 million years with a complex imparted spin. Program tested the nanosecond jump as intended. As all celebrating Titan while android typing randomly Tian in back of van drove off to area dinosaur seen and a raptor was chasing people. Rammed the beast and managed to stun it and trap it in a force field bubble while Traveller explained to police nothing to see here. Apache helecopter arived from Woomera rocket range as part of a back up plan. Dino scratched at force bubble when he awoke then faded away. Meanwhile a manager has poking the decoy android and Titan resumed control and explained the alternate experiment program that almost ran. All very concerned and exited. One scientist noted proton spin was actually a message. Spied briefly of Dr Magister the replacement for a scientist found dead in hotel room from allergy attack a few month back. He was a bit devilish looking with a pointy beard after all and was working with professor in upstairs closed lab.

All went to pub to discuss all Traveller followed Magister on terrible pretense and got abused by him. Then outbreaks of dinosaurs attacking all over town. Roars and scream everywhere. Titan rushed out to help in battlesuit. Traveller copied himself to help police, and ran after the Dr Magister with his disintergrator. The evil Dr tried hypnotise him and boasted he had already one. Traveller shot him revealing his lizard skin under his flesh suit and then teleported him out window where he fell to ground and left in a coma. Then he joined his quantum clones in the streets.

While dinosaurs everywhere Tank flew to lab and beat up a pterodactyl on way. He disintegrated the wall and went straight to the secret lab and found system had rebooted the power plant, shut off Titans security and sent the proton 165 million years back. In the pentacle forcefield emitters showed hologram of the supreme dinosaur intelligence who boasted he would come to the present to destroy the repulsive lactating monkey beasts world. Tank flooded with flammable liquid hydrogen destroying the lab. Then flew off to help civilians. Gave instructions for security chief to shut off micro reactor.

As the heroes battled dinosaurs new ones appeared and were getting bigger. Tank got message from lab os screaming security guard and flew back to lab. Titan was crying about not enough heroes and not being able to save everyone when apache arrived and snotted a dino in the street with anti tank gun. Chinook helicopters outside town dropped of vehicles and heroes cheered as various vehicles arrived on scene.

First a humvee with anti tank rockets. Then a dinosaur containment van (actual matchbox car model), then anti aircraft tacked vehicle with two big autocannons. Then two tanks and finally a missile artillery vehichle.  Finally a harrier fighter arived. All performed well and spectacularly killed dinosaurs all over town while heroes helped civilians and got dinoasurs from a gas station and supermarket. Once civilians clear Traveller blew up petrol pumps and killed three stunned dinosaurs.

Tank back at lab to see a Godzilla sized horned devil dinosaur, the supreme reptile intelligence. Started to fight it and realized it was no use so he grabbed the reactor, rebooted it and ran away from town taunting the evil dino tyrant. When the Intelligence started being shot by military he mind controlled the harrier to destroy a tank and harass the others. When far enough away to hurt the tyrant and not the town, Tank dropped micropile, ran back and covered his suit in block of ten tons of carbon. The he shot the portable reactor with a anti tank rocket. Boom.

After cloud cleared the dino king was furious, glowing and burned all over. A last salvo of the army and he went down and all the dinos faded away. Traveller got to save the serpent man and get in the dino containment truck.

All this was played over whiteboard town map, with increasingly bigger dino toys and matchbox cars, planes and tanks. Was a fun mini based game and i enjoy putting bigger things on map and players reactions. After 30 years of gaming i finally get miniatures. Inspired by Dinosaurs Attack cards by Topps, cousin of Mars Attacks. Will introduce dinos in my mars attacks games too as i have awesome box set game and extra ruined building set. Will replace all game card stock pieces with plastic toys and get the civilian/burning cow set. Keenly awaiting new sets of this awesome game. 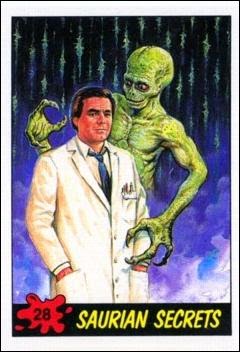 Im pretty sure these cards are not a documentary. Will get more dino toys and prehistoric life.