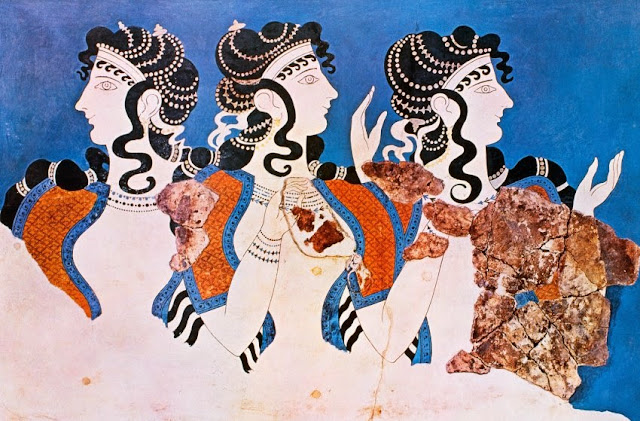 So the party debated where to go and as they had developed a taste for sa travel and Ariana was hankering to visit her birthplace in Knossos the party headed to the Minoan civilization in the medertereanean.

Spent time boating and swimming training then headed west. Had two chariots and a wagon so made good speed and culd avoid unwanted foot encounters. Met some Hurrian barbarian nobles on road a few days outside of Babylonian Empire and met them peacefully. Stayed to feast with king and draw up trade allegiances. Continued west and at one pont saw 30 men aproaching them. Amorites judging by their hats and arms. As the had Chariots normaly might think twice but confident with their magic and skill and relitive weak armour om men with mostly just sheilds. Charged them and men formed three lines. Rear archer line and party members began deadly volleys. Heroes managed to whittle down the front rank with shields til javelin range kicked in. Then both sides hurled even more missiles. Peck, champion of Ninurta took several hits in the chariot driven by Kull the Marduk champion. Sobek herseslef an Amorite was a skilled chariot driver and mostly her donkeys were hurt. The front line of sword and sheild men were badly hurt. The archers in fear scattered as the chariots crushe dthe single line running down eight men. Several heroes jumped off to kill those still able to fight and the archers were run down of shot by bow fire.

A tough battle but heroes captured seven men and filled their wagon with a fortune in weapons. Travelled on to Hadadbad, dedicated to Ariana's adopted storm god. She was thrilled to find a great city between her birthplace on Crete and her home in Babylon that put her god number one. Etablished a trade house and sent letters back to dad informing him of the extnsion of the family trade routes. After a week moved onto Tyre a Phonecian coastal city. Nobles bought nice purple robes and a ship. Ariana refused an offer for a lift to Knossos from Minoans as she didnt trust them. Part bought a ship, a ex pirate raider captured by navy and set ail with crew of extra ten phoneceans. Nahme was good enough a navigator she went by thr deeper water non coast route. They found a tiny rock outcrop and decided to stop for water and saw goats. When they scanned Island with second sight saw a man hiding. He was a hermit fleeing political trouble after his youth as an adventurer, pirate and philosopher. Told them how to get to two magical Islands he visited 30 years ago.

Party stayed a few days and bough cheese and relaxed till stars were right and went to visit the magic Islands. First was populated by a cyclops herder who made magical wooly boots for the gods and was a son of Posieden. Hermit stole a vase worth thousands here as youth. So they bid him farewell and left on the full moon after six days.

The newly named Wavebiter pulled to shore and sneaked up and watched giant. After a while Ariana and Iltani the Ishtar worshiping Sumerian sorceress called to giant while others in hiding. All a bit split on this action but at least the women might be good bait. Cyclops invited into his cave offering them wine and cheese and the girl followed him in while the silent and grim Nergal hero Toth and wiley Pek the barbarian followed. Kull and Draco the Gutian brothers followed. Sobek remained on boat. Saw three amazing gold urns and girls seemed interested in writing so as lonely cyclops invited them to read the inscriptions h stepped back to roll a boulder over the door. Toth and Pek ran out and smashed his led felling him. The Gutian brothers followed up with attacks to the head and giant clumsily failed to stop them and passed out. Iltani instructed to leave the cyclops as he was a gods son and it would be sacrelige to kill him. Pek said all monsters were divine and we must kill them anyway. Party grabbed wine, cheese, caught 4 giant wooly sheep, the three gold urns and fled. As they sailed away the cyclops crawled to peak of Island ang abused them as thieves demanding to know who they were.

Kull cried out "we are Egyptians".
Toth moaned as he was half Egyptian.

Terrible storm appeared and all struggled against the wrath of gods then it stopped. The air was calm and the boat wa smoving of own accord. Ariana the best swimmer tied a rope to herself and jumped overboard to see. A sea god with a fish tail sixteen cubits long was dragging boat. She climbed aboard amazed. All puzzled by this but real reason gods spared them was Sobek was pregnant to the Sea god Enki with a sea Nymph.

Saw horrible rocky Island. Was last day and warned must go south of island on full moon or be trapped seven years. No way to land so dropped anchor stone and swam to shore then climbed up cliff. Heard ferocious sounds and saw two wingless male dragons battle while two females looked on. Party were amazed at the 24 cubit (12 metre) beasts. So the scattered and hid when dragons noticed them. Some jumped to cover, Draco hid behind a veil of darkness he cast and Ariana got chased up mountain cliff with her jump spell. A female dragon folloed her and on top of rocky volcanic hill was a cave she ran in. Inside was wealth of a kingdom glistening. Dragon behind her she dived in and burried herself in loot. Dragon came in and two males followed. Meanwhile Kull called on Marduk and commanded she dragon searching for them below to allow him to ride her. Then commanded her to take him to her nest. Others amazed by this and several jumped off cliff and back to ship.

Ariana in the cave was trapped under the gold and gems while the male dragons resumed battle on top of her. Kull saw three more dragons before came to the nest and bid her dig and he snatched a egg. Weighed a talent so got dragon to return him o ship then go to opposite end of island and sleep. She dimly waddled off to obey and all waited tensely for Ariana.

Ariana swallowed as much gold and gems as she could and while dark ran from cave and jumped into the sea. She swam to boat and almost failed when her peers threw a rope to her. They sailed away on time to return to the waking world. Araina passed the treasure a bit awkwardly and cleaned it up. A fortune. The gold vessels from the cyclops were examined and had apple symbols and Minoan like script with screw lids. Inside was gold liquid. Ambrosia of long life from the gods. Then the Nobles of the group Sobek, Ariana and Iltani deemed they should as they were most important. They felt vital and good but lightning and thunder crossed the sky. No other noticeable effect. A second sacrilege in only a few days. In the morning Knossos palace city of king Midas was visible at last and Ariana was glad to be at her birthplace.

Posted by Konsumterra at Tuesday, November 11, 2014