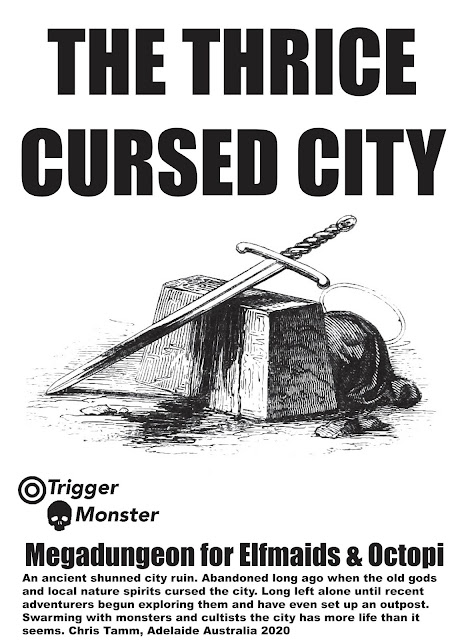 So Richard was away on a medical emergency so we played my Patreon ruined city adventure with Dallas & JB playing.

So last game players escaped slavers and rested and were now 4th Lv.

The mercenary was keen to get back to fighting.
The wizard had recruited several followers including charmed cultists and bandits and a priest and a fighter. Some were only zero at first and hope is the clerical student will get to 1st level.

Considered robbing the magic library but the mention of weird creatures made them worry. Thought about getting bandits but a fairway on foot. Instead decided to see the ziggurat and a small temple nearby. Got to the temple and heard berserkers celebrating after killing cultists. Knowing these guys almost killed the party last time they took no chances and the wizard cast web. Most were really strong and tore free and all tried to go berserk (Wis roll). The wizard's bodyguard fighter threw a lamp in the web and it exploded wounding most of the berserk while missiles took down those not berserk. Finished the hang with a few wounds and spells but all impressed as the last time 4 beat the party. Found more urns using detect magic and the magic one had a zombi hand that choked the wizard before the merc killed it for good (we think). Took its gold ring. So after carried off their armour and weapons back to the explorers guild in the ruin. Had to hide berserker stuff from the psycho barbarian berserker in the camp and sold trinkets to a backpack peddler.

Recovered and were keen to set them off. The guild masters thief sister started talking to the adventurers especially the mercenary. Returned to the ruined temple and easily wiped out bandits. In the temple, they dug their hole opened and explored ancient palace basements below the ruin and also found a furnace and lots of rats. Found a ghast in a bed that stunk the party out and they managed to kill it. One tunnel the wizard sent his thief went down to find a light source saw a hermit with his beloved rat swarm. The rats noticed the thief and the hermit turned into a were-rat so he ran. The wizard saw the chase and used a web spell trapped which trapped the ratman and while others used fire to scare rats. Several times tried to throw burning oil at the web failed and they took a while before the merc waded into the web and killed the rat with his magic sword.

Finally found some palace basement with rotting furniture and a chariot and scouting out half the room they could see by light. As the mercenary moved ahead with his lamp a woman in a flimsy nightgown came out of a doorway sobbing, oh thank goodness your not undead or cultists. She ran to hug the mercenary but he was not responsive and the wizard cast grease on her and she slipped and got mad. The succubi showed her true form and shrugged off magic missiles and hid in a bubble of darkness inside the grease area. The merc charged with his magic sword and slipped. The wizards magic missiles seemed ineffective. His follower a former demon cultist warned the demonic chanting was calling a demon. Someone helped the merc get out of grease with a spear and they backed off as a huge hairy boar-like winged demon appeared over 3m tall. The party all cried flee to warn each other in unison and they bravely ran away.

Back to the explorer guild ruin they saw the berserkers had left and now a bunch of nights had moved in. These knights seemed lower sort and battered and used to rough lives unlike the templars staying in the dungeon part of the guild. The wizard shiftiest follower warned they were known robber knights wanted in several kingdoms. Their linkboys were enthused and felt lucky to hold poles and pots and lamps for adventurers for a chance to learn the trade. Party avoided these guys despite friendly manners and awful stories of the kidnappings and beatings given. The wizard was also using his dream viewing spell on his followers recruited from bandits and cults to look for clues and how to help them better reform.

The next healthy free went to the ziggurat to look around and as rounded corner saw bandits hide in ruin temple prepare an ambush. There was a volley of missile fire and the bandit leader fled from a cantrip, then the mercenary who had been creeping under cover of building dived among them and two managed to flee. Party rested in the ruined temple a while and the wizard spied on an unconscious bandit survivors dreams.

Went to the top of Zigguratt and tried to get in but magic was required. I'm inserting the Sacred Temple of Erwadu a Dungeon Delve By R. Nelson Baily. They backed off planning on getting a new spell. Saw the baboon hill and the goat hill. Back to the explorers guild ruin and the Robber Knights had gone to the Sly Grog Shop (according to a thief is guild affiliated). While they were away a wounded adventurer hanging about for weeks lured the boys away and all were concerned. The Robber Knights were keen to attack the demon cult directly.

The party when recovered decided to wipe out the bandits. Marched into the bright sun and aimed for the hermit hill. As they went around they saw some bandits so hid and managed to defeat the rest and had to chase the last one fleeing down. But he got away only to be killed by ogres. The ogres picked up the body and marched towards the party and the bloody battlefield and made rude gestures. Told humans to back off and they considered the request. But decided ogres would have lots of gold like the last one.

Ogres moved in and the wizard summoned petty owl daemons to slow the ogres and all fired missiles. Lots of missiles and the mercenary attacking weakened some and lots of magic missiles but the party won and got the gold. After this heroic mess, they returned to rest and level up.

The mercenary adopted a young warrior woman and the wizard was going to recruit another two men because he didn't want to be one of those wizards who acted like pimps but he did decide he should employ one woman so he wasn't one of those all-male henchmen wizards. Followers are such fun. He got that knock spell and fireball so was keen to cause trouble. As he had so many followers now he wanted to leave the latest home as too much record-keeping for now.

So they managed to get to the bandits safely in the evening and the thief sneaked up a wall and killed a watchman on the outer wall of the roofless temple. Lots of bandits and dogs were inside celebrating and a few slavers were with them. The mercenary empowered by spider climb tried to kill a watchman but made a noise and the gig was up. The wizard moved his arc of fireball so blasted half the room of zero level bandits into carbon. Their huge ex gladiator chief with a sword challenged the merc as he killed a guard. Followers awaited outside with missiles and the wizard summoned his hooting owl fiends, several batches. The slavers were beaten down and their leader was just trying to speak and halt when magic missiles took him and the last two standing bandits surrounded.

Hot some magic loot and gold and took it home to study. I used my EMO Book of Cool Loot (treasure compilation from blogs) and this stuff came up. The party could identify only a few properties of the items but identified: +1 2-h sword the Prism Blade that lets you detect invisible when held. A frying pan that heats at will. An umbrella that shoots 4 burning hands a day, a skull with gold in its cracks and mystic symbols calls a ghoul once a day that obeys for ten minutes. Also, a pair of magic knitting needles that work 2 hours a day enough to make a sock or small scarf if given yarn.

Party is interested in building a home base somehow to mind loot. Considering uniting with other adventurer parties (templars, amazons and robber knights).

Was big fun. Party finding ruins creepy, avoiding the darkness and interested in cleaning out evil humans mostly and recovering magical lore. Seem sure there is more than one cult. They have got rid of most of the bandits, quite a few cultists and most of the berserkers. Lots of factional problems abound and there are more adventurers coming. 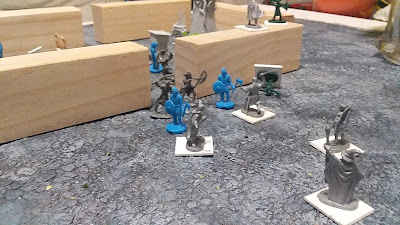 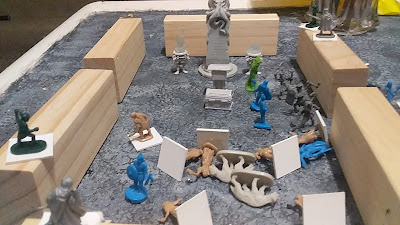 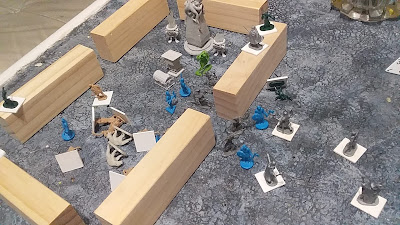 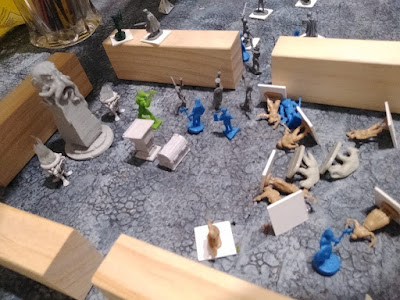