Planet of the Cocks 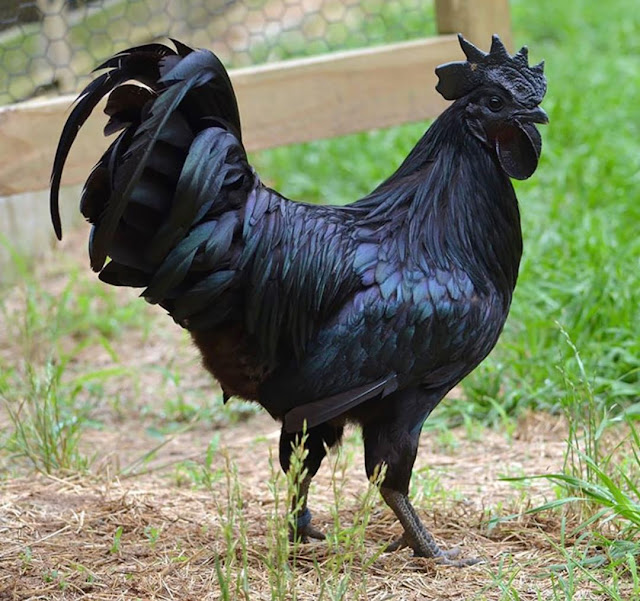 Yes this is a homage to Famine in Fargo

Clonecorp food services technologies developed a new approach to authentic fast food developing a clone chicken assembly line of force grown animals. With local clone corp suppliers providing Real-Chicken(tm) to fast food Chicken-Attack outlets they became one of the biggest food corporations. No more faux meat printed on plastic skeletons, Real-Chicken(tm) means real bones! Not like that vat slop dolled out to the poor by the state! CHicken cloned embrios are force grown in assembly lines or vast carosels, force grown to adulthood, then slaughtered like nature intended. The whole process is so hygenic and rapid its totally humane. It's a luxury dream anyone can reach. Eat like the pioneers and your ancestors.

200 years later after the apocalypse, automated factories and Chicken-Attack restaurants remains are across the world. All linked and ready to feed the world again. Despite the apocalypse, the remaining corporate artificial intelligence CAPON is prepared to adapt and distribute its stockpiles of chicken dinners stored over centuries using new means for the wasteland market. Chicken Attack resteraunts from from Clonecorp are back!

After some troubles with creating a race of killer chicken abhuman maniacs, the AI worked on a cargo cult trade with the new customers in local villages. In time the villagers built own crude Chicken Attack restaurants for travellers and they began to spread. At first the cult used robot transports but as it's systems got repaired it began accessing a teleportation array and the priests of CAPON could now perform miracles.
Rival food cults were discovered and to this day all wage a vicious war on each other.

CAPON is the AI is networked across the Clonecorp locations with other AI but especially the food services systems. CAPON is often depicted as a flamboyant dressed rooster with jewellery, a hat and a long tail. A variety of mascots decorate the restaurants including Dr Pecker, Randy the Rooster, Holly Hobble the handi-capable hen, Officer Cluck, Eggbert, The Singing Nuggettes, Clarrisa Cackleberry. These appear on clothing, toys, animations, tokens and packaging. In far away places locals build a crude Chicken ATtack resteraunt from heresay and prey to it in hopes that chicken dinners would appear from robot angels.

Chicken Abhumans, also known by various names but don't call them cluckers if your a human, were created due to a facility being hijacked to create Abhumans. As the influence vanished the race of mighty chicken warriors conquered their factory and the CAPON subsystem managing it. While the machines were hijacked to make chicken folk, groups left the factory to set up colonies and locate advanced weapons and technology. When brave humans saved CAPON and returned control the rogue chickens were cast out. As humans and AI grew closer some chicken abhumans were raised with the humans and become part of the chosen people. The ferals are split into those who just want to be like all the other peoples to farm and be left alone and those who wage war on human kind out of revenge for millennia of opression.

Chicken Attack Resteraunts and CAPON temples and factories may have faithful abhumans who understand the god clones flesh to help many and that chicken kind are sacred vessels of their gods kindness. Second generation chicken folk from the clone factories have varied pigmentation rather than white such as red, brow, black, piebald and some also become stranger due to mutants. The wildest baddest chicken gangs include the Rednecks who rob travellers, the Leghorns who grab land and the deadly chicken supremist human hating Coop Cluck Clan.

Chicken folk seem to have technical and firearm aptitudes and see it as the best way to advance their goals.

Cargo cult restaurants have only heard of Chicken Attack and make their best to recreate a restaurant experience. Many try best with local ingredients which may not be up to Chicken Attack standards. Eventually, these peoples efforts are rewarded and a factory robot angel will arrive to deliver tasty meals, uniforms and franchise manuals.

Capon - God of Food (Restaurants, Biotech, Agriculture)
Patron of food producers, restaurant staff, farmers, chicken abhumans
Deeds: Provided food for the people that flow from its inner workings, waged war or unhealthy fast-food franchise, delivers food and builds family-friendly restaurants
Apotheosis: After the apocalypse, Capon was damaged but heroes helped repair it. From within the god was spawned chicken folk some who were tainted and evil and even took over Capon's systems to  breed an army but Capon and human allies repulsed the evil ones
Associated Cults: Reproduction, FIrearms, Technology

CAPON is a god who brings food to the masses drawing the sacred flesh of chickens from its inner workings in the form of packaged self-heating TV dinners in boxes. Its temples are Chicken Attack restaurants and also the less seen secured clone factories they come from. Restaurant temples often employ Chicken Abhuman guards and the cult in the past has raised armies of these chicken warriors rapidly to protect their customers.

Beware the feral chickens that leave the sacred precincts of the cult!
Beware the false fast foods that tempt others with poison food!

Conjure Feast
can summon a d12 large greasy chicken value dinners per level, each heals d d4 damage an hour after eating. Includes 3 pieces of chicken, corn, cornbread, potato and gravy, fries, nuggets, small salad, plastic biodegradable packaging and cutlery with a bottle of Capon Cola. Each level a new value meal option becomes available including vegetarian options.
d12 Oaths For Capon
1 Beware the chicken who abandon our god and have run wild like beasts
2 Beware rival food cults promoting unholy and blasphemous food products
3 Eat chicken dinners from Chicken Attack restaurants as often as possible
4 Help spread the news of Chicken Attack and its bountiful dinners to the feckless
5 Shun all flesh not from a chicken
6 Beware imposters pretending to be faithful to exploit the unwary
7 Never trust clowns for they serve the evil one at the gates of hell
8 Own your own Chicken Attack restaurant shrine
9 Take a yearly pilgrimage to a factory or restaurant in another land
10 Help expand the network of Capon systems into space and food production
11 Hunt the wicked who defile our diners, delivery drones or employees
12 Treat all outsiders with politeness for they may become customers

Unique Gifts of Capon Lv 1-4
Conjure a complimentary serve of small fries once per day
Conjure a can of Capon Cola once per day
Holy Vestments - uniform with AC+3 (includes bullets & energy) headset mike & radio
Teenage Lv0 Chicken Abhuman in holy vestments to be raised to serve Capon's will
Unique Gifts of Capon Lv 5-8
Book automated hovertruck for next morning pick up to nearest cult facility once per week
Book rotary flyer delivery drone to carry 10kg package 100km, arrives in d4x10 minutes
Companion Robot linked to Capon. Skilled groom, accountant, first aid but pacifist
Chicken Abhuman bodyguard 6th Lv. Skilled with guns, repair and driving ground vehicles
Unique Gifts of Capon Lv 9-12
Thermal IR Laser Rifle (5d6 8 shots per hydrogen cell)
Automated hover truck with own AI
Call a section of chicken abhumans soldiers in +4AC flack with d6 slug guns & truncheons, arrive in d4 hours, once per day for four hours
VIP feast daily delivery missile, feed dozen posh dinner or can crash as 12d6 kinetic missile, 3d6 to those in 6m areas, save halves if incoming detected
Unique Gifts of Capon 13-16
May transform into a chicken abhuman and back once per day (chickens abhumans instead turn human). Possible to remain in any state of partial change if desired
Conjure a daily can of Capon Cola Cram with energy supplements, Haste for 2d4 rounds
Summon a delivery air car for team airlift once per day for an hour
Rain down over 1000 chicken nuggets and fries from the sky for 100 complimentary meals
Unique Gifts of Capon pLv 17-20
Orbital microwave beam, 12d6 damage 3m wide beam d4 rounds per day
Call a gargantuan chicken war beast horror one hour per week AC+10 HD20 Peck, Claw x3 2d12 each attack in melee and a 5d6 thermal laser rifle built in its cyber eye, is also tons of delicious and is teleported to the location and away if it lives (the eye will always teleport away)
Back up clone requires regular back up brain scans at AI factory facility
Call an army of 100 chicken abhumans (1st), all with d6 slug guns led by ten veterans (4th) with thermal laser rifles and a support catering hover truck crewed by six teenaged humans, arrive in d4 days and will remain for a week, call once per month
Posted by Konsumterra at Monday, August 02, 2021