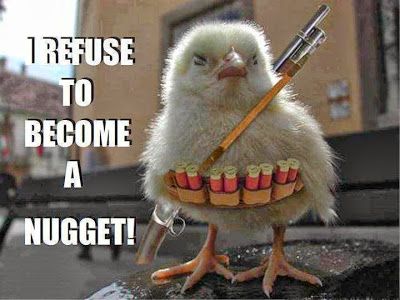 Chicken madness continues on my game behind scenes as a party discussing an expedition to Mildura overrun with various fast food cults trying to control this hub to spread their one-tru fast food restaurant. Players may lead an expedition here and spread their chicken cult to this holy city. A bit inspired by the Umerica setting modules about fast food and wanting to do some river travel. The river can be followed towards Adelaide to southwest or to Victoria or NSW. I need car rules soon.

d12 Legitimate Franchises
1 Burgerclown - crazed violent cult who dress as clowns and are dedicated to gathering meat for the burgers that all chosen must enjoy
2 Bush Kebab - shredded meat cooked on a spit with spice and garlic with various salads and sauces on flatbread. Also called Yiros, Gyros, Yaros, Yeeros or other names depending on the border side you are on. Quality and honesty of advertised ingredients vary from amazingly delicious to may cause mutations or botulism
3 Rowdy-Burger - an aggressive foul-mouthed puppet Rowdy, popular across Australia in ancient times developed this restaurant chain. Notoriously the chain mock authority and greet customers with casual larrikinism, swearing and shit-stirring versus traditional manners. Once customers show they are good sports they get to sit. In the ancient restaurants, an animatronic Rowdy puppet appears at your table to insult customers, more recent built ones use a puppeteer under the table. Restaurants are famous for their themed playgrounds featuring Rowdy sculptures some of which seem a bit strange
4 Sausage Kaiser - mostly sell old sausages from slime mould filled tanks on old rehydrated bread or buns, some better ones have more types of sausage (like soylent), fancy buns and a huge range of sauces. Some are battered on a stick or fried or extruded from a machine before your eyes. Often these operate from caravans or small huts, occasionally you come across one that is actually good and very german with saurkraut and good bread and sausage, but they seem to be in caravans that move all too quickly
5 PizzaJoJo -  frequently automated stores operated often as popular for the pizza as the video game consoles and other amusements they offer. Some have a bigger arcade than the pizza shop. Robots operate them and have become open-minded in pizza toppings after the apocalypse. Scorpion, bush tomato and kangaroo pepperoni is a favourite. Some cargo cults have set up stores mimicking the real ones as best they can without robots or advanced conveyor ovens. Also, sell pasta, salad and synth-steak all printed on-site
6 Sharky's Seafood - fish, plankton, protein from the sea fresh frozen then deep fried for you. Jellyfish and squid and trilobites feature more on the menu in the current era. Fish and crustaceans are alluded to in the packaging and restaurant art. Near water and major trade routes. Some restaurants even float and are even operated by aquatic abhumans
7 Chicken Attack - real cloned force grown chicken fresh, straight from the factory to restaurant. Operated by artificial intelligence god CAPON. Restaurants mostly serve repacked self-heating chicken dinners, but cooked on site Fried or BBQ or Spicy flavours are popular. Locals improvise sides from local materials for a balanced diet. Some places who desire a Chicken Attack restaurant erect a crude one built from second-hand descriptions and serving local food in hopes a truck of frozen chicken and self-heating long life chicken dinner boxes will come to the store and help them build the crude shrine into a worthy altar of Capon. Staff are cultists or prefer the term Caponites. Chicken abhuman warriors guard the stores but some rebel roosters escaped and plot against the Caponites
8 Noodle Master - selling asian fried and noodle and soup dishes. Cheap and healthy and famous for having real rice which it tries to monopolise from rival chains. Many complain serves just slightly unsatisfying. They usually are crushed by more aggressive rival chains
9 Samurai Sushi Train - selling sushi but don't ask too much about the substitute seaweed nori and the substitute rice and the substitute seafood. Hundreds of years has mutated this franchise into a dedicated fast-food faith where practitioners are brilliant with knives and cleavers and flamboyant fashion
10 Buggys Bites - subsidiary of the Insektek corporation insect hatcheries breeds these giant locusts and other bugs and worms in many quite edible forms. The insects are given a biochip that directs the bugs to graze (or steal crops) then fly full-grown back to the factory to process into yummy buggy bites like a ladybug bar or a cockroach crunch or worm smoothie. The cult of Insektek corp include many insectoid abhumans made by the company AI when it thought humans were doomed for future staff and customers
11 Karma Curry - various Asian curries and other dishes served with chips and beer. The patient and stoic staff often have to deal with hungry drunken scum and after a point of abuse, the staff if pushed too far produce unfamiliar martial art weapons from their clothing or use ordinary objects as deadly tools. Often operate allied farms that grow food and mostly don't proselytise and stick to their own clans. A few turn to assassination or martial arts training as a side business. Others trade all kinds of goods on the side like Karma-Kola and will even stay open all night in a busy town
12 Roborg Human Foods - a fast-food operated by robots and cyborgs who not only provide cheap tasteless nutritious paste for humans but also supply synthetic nanite paste for androids. Robots and cyborgs can get a service or power cells recharged]0. Biological customers are often separated from synthetics and cyborgs seat in the middle. Biologicals are sometimes offered the chance to become cyborgs or full brainborgs for immortality by becoming employees. The AI responsible for these modular restaurant complexes is as unknown as it's motives. Restaurants have a cyborging suite, vault of brains, a nuclear pile and the food vats

d12 Diner Size
roll or choose, some have several eateries inside
1 BBQ in the street, a table and a d4 Eski coolers with one worker
2 Tent with field stove and tables with a block of ice with d6 workers
3 Small booth with a teenager and a cooker and a small fridge
4 Caravan with one worker, has a fridge and strive and sink
5 Foodtruck or trailer cart, d4 workers with several stations
6 Takeaway with waiting area, counter and kitchen d4 workers
7 Small restaurant or cafe, counter and kitchen and various tables d6 workers and a toilet
7 Large restaurant with dine-in and collect or drive-through and outdoor rest area and several toilets
8 Pub or Inn with counter meals and a large fancy restaurant dining room for the posh, some huge ones with several different eateries
9 Several small restaurants or foodcarts sharing an open eating area with seating in a strip or courtyard
10 Cafeteria with trays and array of foods to select and mass seating for up to 100 people and several large bathrooms
11 Buffet all you can eat feasting hall for possibly 100 people and several large bathrooms,
12 Mall food court with 2d6 variety outlets, seating for at least 100 and several large bathrooms
d12 Post Apocalyptic Dining Risks
roll here for meals gone wrong or a bad date
1 Parasitic worm infestation in major organ
2 Poisoning 1=mostly diarrhoea 2=mostly vomiting 3=constant diarrhoea and vomiting 4=hemorging d3 damage per hour for d6 hours
3 Mutagenic contamination usually save or cause mild mutation
4 Plague infestation from some virulent post-apocalypse plague
5 Meat this time definitely murder and disguised as respectable meat
6 Meat in meal twitches, save or now latent undead, arises after death as zombie
7 Vermin scuttles across the plate or falls in the bowl while eating, infestation
8 Ate a mutated polyp, takes hold and grows inside your body
9 Mutant plant seed starts to germinate inside body
10 Food is almost out, only one thing on the menu available at the moment
11 Rough customers barge in and annoy current customers and staff
12 Raiders attack venue to seize food and victims and burn it down
Posted by Konsumterra at Tuesday, August 03, 2021