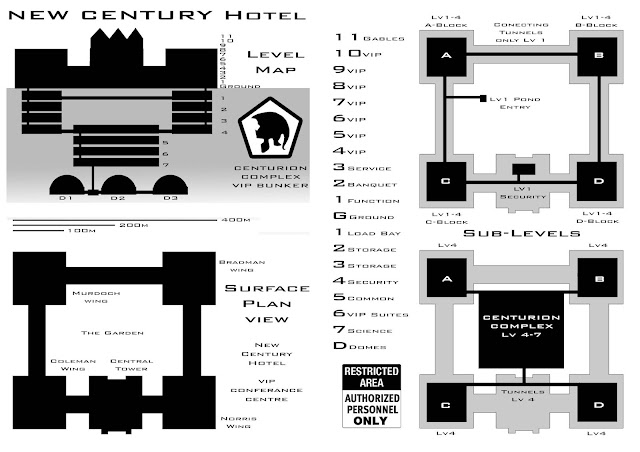 Was dreaming about my bunker in-game and so I did this.
(map fixed 12th - way too tall before and put in plans for lowest levels)
Ill keep the sub-levels quiet for now but here are some tables for exploring the surface facilities (in case Aunty Jack is reading before the next game). I'll do rest later but I'm working on a level by a level map of the lower sub levels.

Basically, the New Century hotel was a VIP function centre for world finance, government and diplomatic purposes. It is also a front for a huge survival shelter intended for 200 years use. It was intended as a secret bolthole for elites. Of course, the whole valley area of Heavenly Haven Estates is full of mansions with bunkers.

The complex is a great square complex with a courtyard garden with a large 50m pool in the middle. Each corner is an 8 story tower featuring floors of conference rooms, banquet halls, service areas and VIP suites on the upper floors. The central tower is 11 stories with the topmost divided into three gables with storage inside. The first floor has a taller ceiling 4m  the rest are 3m. Each building has guest elevators and multiple service elevators. There is currently no power and the limited computer network is dead. However, cameras are everywhere and live. It is possible to get some data from terminals on public booking and staff rosters with no sign of espionage. The security system if accessed has only some cameras linked, the rest are part of a separate system.

The courtyard is overgrown with dangerous plants some of which have colonised inner wall balconies of suites. Surprisingly few creatures stay in for long. Locals fear the complex but specifically, an android sniper with a laser has killed many intruders.

The ground floor is decorated with many paintings of VIPs and murals about peace, technology, prosperity and space travel. Some of the dead plants in large pots have been replaced by some killer plants possibly by androids or because many killer plants can walk.

The android guardians use cameras and protect the surface from the sub-ground complex. They ignore bugs and plants and undead but make an effort to kill or capture humans for information then incinerate them. Androids tolerate certain creatures that make the area more unwelcome to explorers. Any colonies that become a risk to androids or too big get wiped out by a squad of infantry androids sent from below.

The Morlocks evade the senses with their scout suits and seek the way into the lower levels. They might be possible allies.

The hotel is designed to be a tedious crawl through the stripped rooms and dangerous creatures. They want intruders to give up from scale and threats without reward.

Each corner wing has on the ground floor a single hall. The hall floors have seams where the floor becomes a truck ramp accessing the sub-level operated from the bunker control room. Each corner tower has a landing pad on the roof.
Posted by Konsumterra at Monday, August 09, 2021