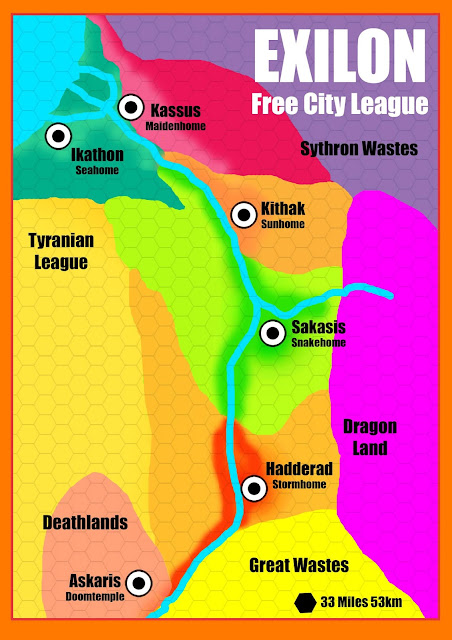 Shaded areas are stronger controlled and have multiple villages per hex and civilized and uses common encounters mostly. Outside areas are more lawless and only a village per hex. The areas outside of Exilon are detailed here. As they don't support any cities and not many towns are mostly regarded as wild country with more uncommon encounters.

Why d12? I like d12 encounter tables and turning and morale vs 2d6. Possibly i just aesthetically like the probability curve.

How often do you roll an encounter check?
1 in d12 Common Outdoor encounters every 4 hours in the common wilderness
or
1 in d12 Every ten minute turn in a lively dungeon
or
As often as the place and situation seems to the GM

Alertness Rating As locals react i use lower dice, d12 for green alert d6 or yellow alert d4 for red alert. I place encounter dice where players can see them and know danger level. Alertness measures how intently the monsters are looking for intruders or enemies.

Exploding d12 can on any encounter table roll a natural 12 you can choose from any of these effects and keep rolling.
or
or

Common Encounters are for the well controlled part of kingdoms surrounding a city state, often following water and best resources and trade points. They are places of order where Law has a foothold on this plane.

Uncommon Encounters are for extreme places. Like wild frontiers where merchant traders cross to reach new places with monsters and savage tribes roam beyond civilization. Tribes of hunting tribes people and animal riding nomads and beast folk live. Many areas have types of monsters. they are famous for and locals have learned to live with them somehow. Night brings more dangerous creatures by night than by day and increases by one step.

Day is the default encounter table result in most cases

Encounters per 24 hours in wilderness Players or GM might prefer instead of facing one common encounter every four hours can roll a uncommon each day at noon and evening at midnight suitable for longer range travels in a week range. or one rare encounter per day for longer trips. You could also swap making a encounter check roll every four hours 1in12 check have one automatic roll per day. A DM might make roll Common encounters by day and one uncommon by night or any other formula.

Askaris
Templars of the Black Ziggarut, Land of the Death Cult

This is a divergent cult from the necromancy age. A cult of templars built the black Ziggarut as a temply dedicated to death and the underworld. The Lich-Priest-King rules the undead order, comprised of once all brave warrior priests. Undead and evil necromancers flood here and monsters wander forth.

Great rolling grass lands for herdsmen and beasts. Sythron are mighty horse riders with bows. Women drive waggons which carry their homes. All female tribes exist and founded the Amazon kingdom long ago.


Great harsh grassy desert wast supports many beast long vanished elsewhere including giant mammals and lizards. Most of the tribes hate civilization, shunning writing, metal and building.  They prefer flint weapons and hate wizards and priesthoods. Some have jooined civilization instead and such barbarians tool over Hadderad and became city folk.

Many tiny kingdoms here unite to fight reptilians to the east. They have a strong sense of warrior culture with most of the populations being slaves. They are allied with Exilon but want war with mutual neighbors. Mostly they fight the lizard men. They are gloomy worshiping death and earth gods and enjoy bloodsports. They believe the world is doom and spend life preparing for the underworld. Each king wishes to build a city and unite them all for conquest.

Dragon Lands
Templars of the Dragon Lords, The Dragon Mountains

The dragon cult worshiped dragons and watch the dragons who sleep. As the dragons slept their vassals created a theocratic empire lasting since before the monster kingdoms and necromancers age.