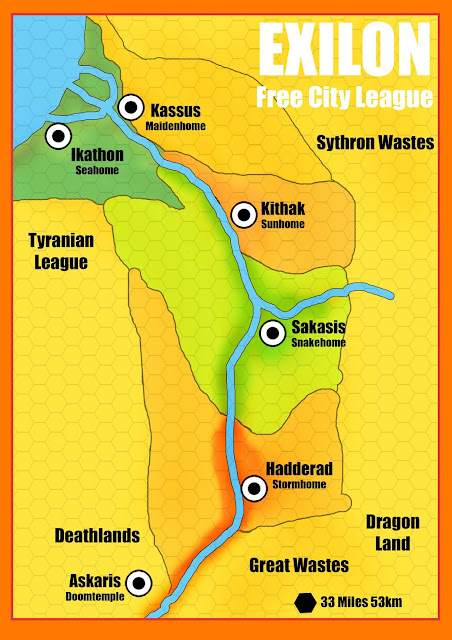 These places are distant trading partners slightly too far away to war with but influential. They might be visited or mentioned. Assuran is at war with bloody aztec like jungle empires to the east. Also it is possible players could come from these lands or went to a war there.

a former central hub of the monster Empire and a important sea trade city for their occupation of the world when sea levels were higher and the north less frozen.  Now only a small island remains as it was since humans, humanoids and demihumans destroyed the monster empire. Shadelport a great ruined city has attracted pirates to re settle it and who knows if anything will come of this mostly ruined city. Sea Travel away from the coast is risky limiting contact with this land. Monster Island off the coast is a magically preserved remnant of the Monster Empire where humans would never voluntarily go. Many colony ships have gone there but little contact returns due to poor sea navigation for humnans.

In a future age it is renamed Exile Island and the city Shadelport is a world famous haven for pirates and adventurers. Under the rule of a mysterious masked immortal Barron.

Lizard Kings
Civilized lizard folk  with many kingdoms and great cities. They split from the serpents and dragons and survived the end of the monster age. They are a proud civilized people. They have domestic dinosaurs and worship a few naga and dragons still in the country areas still. Most worship a reptilian dynasty of gods similar to the human ones. Tribal varieties vary much in skin colour and skull shape. Some have dorsal crests and horns or frill necks. These features speak volumes to lizard folk about ancestry and homeland. They often war with humans

Assuran Empire
A conquering empire that has reached its limits. Famously cruel and many say it's common gods are actually devils in disguise pretending to be the common gods. Their state deity might well be a form of Asmodeus. They war with several jungle empires of bloody chaos cults to the east and wasteland barbarians. Highly efficient war machine and engineering of their empire have kept them strong. Their legendary cruelty has them surrounded by enemies.

Faerie Wilds
Elfland full of magical beings, humanoids and demihumans and forbidden to humans. The faerie king and queen of the region are gods who's personas and ambitions vary with the seasons. Humans mostly keep away and the forest has been expanding for generations. Smaller isolated pockets exist and faerie folk have magical roads connecting them as if their land was contingent.

The Arcane Empire
First great empire that developed the common language, weights and measures. Wizards thrive here and serve in the army for part of their lives to pay for their state schooling. They are great merchants scholars and archers. They are great merchants with slaves from across the world speaking their common tongue. Their greatest city scrapes the heavens and some gods are displeased by mortal arrogance.

The Belloron Empire
Their great cities are full of temples and ziggurats are famous for piety and holy festivals. Their priest kings are holy people and the descendants of the gods. They were founded by a hero king monster slayer who gained divinity from the gods for destroying a cosmic monster. To this day they use many exotic breed monsters subserviant to the gods as beast cults.


d12 Encounters
1 Priests marching on processional route with statue of a god
2 Pilgrims touring the empires holy places
3 Templar warriors of various religions on the march with pet monsters
4 Priests collecting tithes of the gods with escort troops
5 Crusaders off to fight a holy war
6 Monks or nuns with holy relic
7 Returning hero being praised by commoners
8 Commoners off to visit the temple
9  Beast folk cultists serving the empire
10 Griffons, Sphynx or lamia block road hungry for flesh
11 Cherubim or good minor spirit make apearance
12 Archon or Shedu or angel or djinn come to reward the good with gifts (gifts only work for lawful good beings)

Necromancer Kings
Kingdoms ruled by ancient liches and immortal necromancers in the north. Villages are a parody human ones with undead farmers working with their undead animals. Many living serve too dreaming of being made into superior undead. While to the south a new heretical school of flesh carnomancy magic has taken hold from the world of Xor. Now necromancers fight each other. The flesh wizards seek to use living matter as tools. The Death templars nearby as comparison were more theocratic while the necromancer kings were wizards. 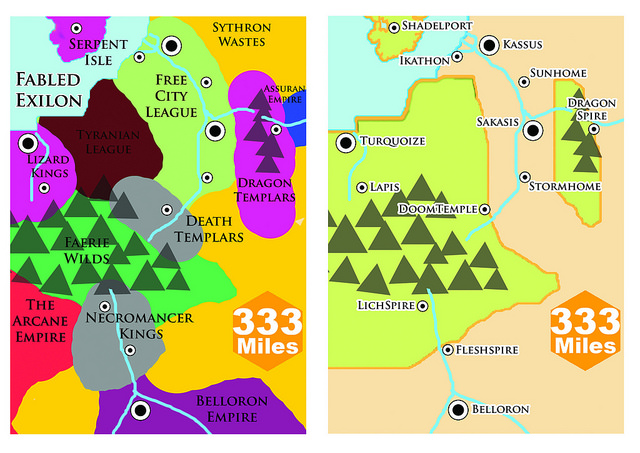