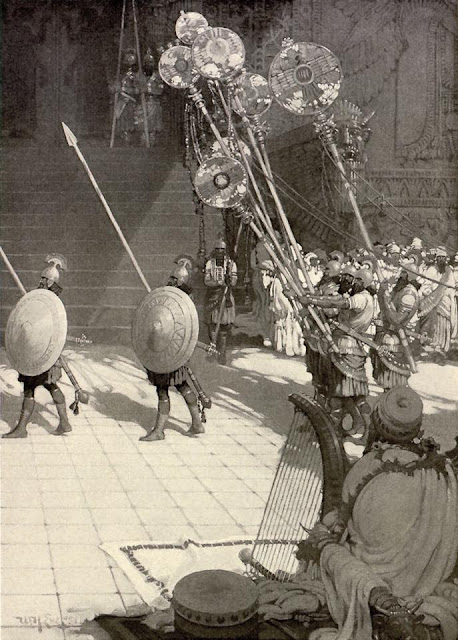 Exilon of the central region of my Eldritch Aeon and Elder Waste Setting, a previous epoch long before Shadel Port and Exile Island, just after several ages of tyrant monster kings and necromancers. To go with my city state and town and village generators here are defences for the typical settlements of the area and a table of mercenary and troops used in various wars.

There were seven gods of darkness
The Lord of the abyss, master of death and war and plague and famine
The Witch queen of the dead who sat on the vampire throne
The great demon bird who swallowed cities and set fates of mortals
The great dragon Mother at war with all who spurned her
The great giant king who ruled the mountain forests
The great troll father who made the earth itself revolt against humankind
The great hag of the depths, the ogre mother who hid the good things from the world

Seven Gods of the Dawn
The moon god lord of commerce and travellers
The sun god, king of kings, lord of law
The evening star, goddess of love and war
The lord of the storm, great herdsman of the sky
The lord of the wilds, fertility and plants
The lord of the hunt, slayer of monsters
The sage of heaven, overseer of dreams

Barbarian clans & decor + races and men of the wastes