Elder Aeons Map and some other projects 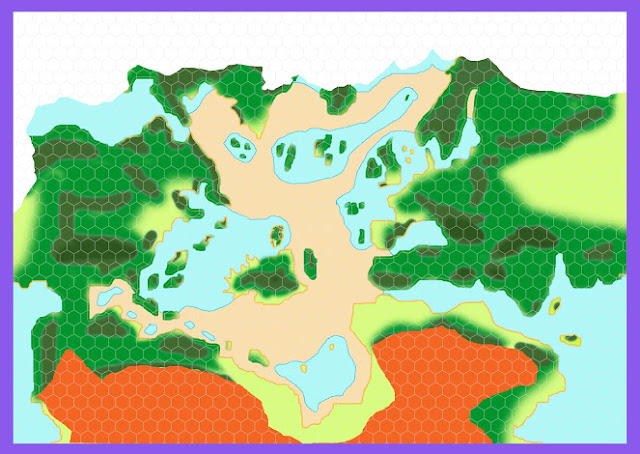 So I took my Shadelport World Map and shrunk the inner sea, grew the forests and
made the former deserts into light green grasslands, mage the mountains greener,
changed the ice lands and firelands area a bit.

Outside the waste more remnants of monster empire still rule

Will expand a area a few hundred miles across possibly from centre of the map
between the three inner seas that are fresh water
Describe a dozen odd cities, tribes and monster factions in a hex crawl
I want to have a technological fallen race somewhere too so robots and androids and tech ruins can occasionally be about. Possibly star related elves who will be jerks who want to flood the inner world.

Will do some encounter tables too.
Possibly a monster empire stronghold table set

Will get my own place in near future and will hopefully set up a studio in a garage hopefully for model making and painting and art. Hope to get some foam cutters and photographic lighting set ups. have a paintbrush but no idea on using yet. I've had a break from art for a while but will get my business up and running again. Plus lots of back taxes to  and my dads post funeral bill paying to do when bank accounts unlocked. Hopefully I will be comfortable and financial next year with flexible paid working hours. At least when I did art as a hobby I made money and spent very little without much deliberate effort.

Studies moving forward. Mostly doing placement work at moment which is leaving me tired. Have been getting involved in culture events a bit more and had some good socializing and free weekends again. I'm tired most week days, busy mostly and not doing a great job of looking after my health.

Still hoping to get some more games going but slow as I don't really play anything current or trendy. Running cthulhu with 4 regular players. My other attempts to get game get on response on average. Most of my peers with kids struggle to get regular games in. I've proven to be lame at getting a online thing happening and cant keep up with who hates each other.

As I'm not playing dnd at all (only a few games in last year mostly in Sydney) making stuff for it is increasingly low priority. Id like to finish a few more books on my patron but will probably wind that up by end of year. I'm not really so happy with any of my products and don't feel closer to being able to sell stuff. I'm going to do several art books next year with very little text so should be easier to be satisfied with finished products. Anyway I'm not really into drastic forever decisions. I'm not really looking for a replacement for G+ as It winding up coincides with other things in life.

Would still like to KS one or two books and commission artists and editors. I kind of hate editing my own writing and it has been the main cause of my dissatisfaction of my own work. When I was a managing editor having staff to manage that stuff was better. I will be commissioning some artwork for some projects too. As COC is my main thing game wise I have considered working on some projects for that but thy are more research intensive.

Gaming has been a big part of my creativity the last 6 years but my output will be diminishing for foreseeable future. Possibly might start some video projects. Have urge to do model making, learn drawing realism and play with some film titling.

Hardcopies of Planet Psychon via LuLu (cant afford hardcopies of my own stuff now)
Not sure If I need to resize doc in letter format/inches from current size which has made me hesitate. Revising stuff again and again was always intention until I'm satisfied of salable quality. For moment I'm not satisfied anything is or effort to fix is questionable.

Hoping to get on with my Broken Hill post apoc map and description for a small setting book campaign for gammaworld/psychon.

Thanks for everyone who has read my stuff and helped kept me active through your support.
Posted by Konsumterra at Sunday, October 14, 2018

Email ThisBlogThis!Share to TwitterShare to FacebookShare to Pinterest
Labels: campaign