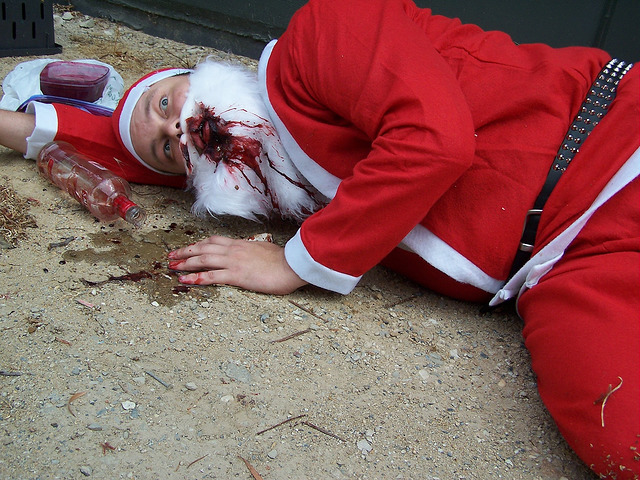 So santa is in his workshop with his favorite meddling kids Billy and Jenny working on his time machine (how could he deliver presents all round the world at once). Suddenly a time portal opens and cyborg santa from the future appears through a wormhole guns blazing. Santa manages to drive him back with help from the kids and his trusty xmas M60 machinegun. But looking through his time scope santa sees the naughty cyborg travel back in time to the dawn of time. Santa realizes the cyborg santa from the future wants to destroy xmas through all history by killing the first santa!

So santa and the kids get in his time machine (a sleigh) and they travel back. In the dawn time they encounter the first Santa. A primordial horned god with bloody red claws who punishes the wicked and brings fire and meat treats to the cavemen or death to the bad hunters who don't obey the code. Santa Claws attacks modern santa for breaking the rules of time and Santa wonders if the prehistoric santa needs help. Then cyborg santa appears and there is a terrible shoot up.

Cyborg santa decides to go back further to stomp on the primordial slime sanda comes from. Santa manages to team up with prehistoric santa claws and they both go in pursuit with the kids.  Cyber and prehistoric santa have a terrible battle but the kids come up with a plan. They travel with santa back to the present and smash the original time machine and santas robots sending cyborg santa into a paradox hole of non existence.

They make some jokes and santa is resigned to keep delivering the presents the old fashioned way.

All Rights for Sale
Posted by Konsumterra at Sunday, December 24, 2017