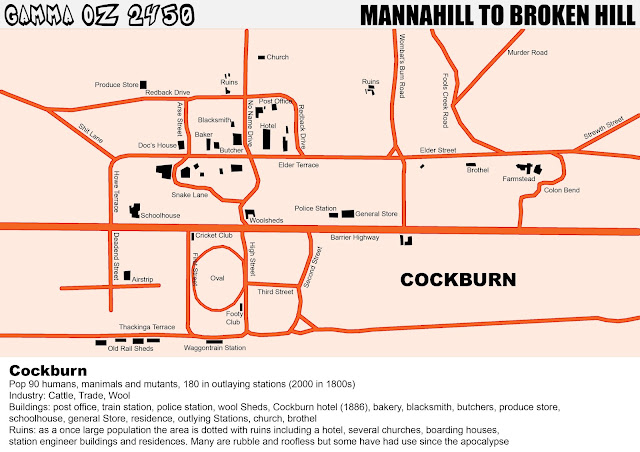 The point of the campaign is to get to know the basics in the home village of Mannahill then follow the highway to more adventure into bigger and more ruined towns. Hopefully by the time they reach Broken Hill they will be ready to compete in a bigger world with more advanced ruins and tech and more complex societies. Cockburn is the second biggest town in the setting before Silver City (Broken Hill).

Cockburn is a bigger town than Mannahill and is worth a stay for a while. Being bigger it is not as friendly and cosy and everyone doesn't quite know each other as well. There are ruins though aplenty and all kinds of troublemakers can be found camping in them. The next step should be Broken Hill which is big enough to keep players busy for years and has opportunities for power influence and fame.

As the next biggest town it has more complex ruins. Here are more detailed ruin generators for use in the area. It could expand on the smaller towns of the simpler ruins in Broken Hill. Broken hill has expansive sprawls and mine remains and advanced bunkers were hastily erected before the end times. Some still inhabited, some still secret and others open to the wastes. They are still for fairly small and modest ruins the size of 1d6 houses.

These d8 tables are more often d6, I roll all dice at once different colours
Many structures of one type can have been modified in later eras or even restored. A colonial looking house might have had nano repair bots or high tech coatings.