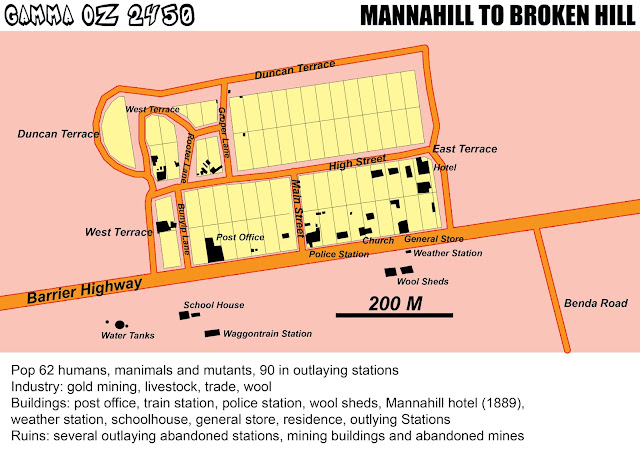 All the roads are dirt and not as straight as map suggests. Blocks are all ramshackle. Rubble heaps with weeds and trees all over town. Most keep chickens, rabbits, fruit trees, dogs, cats and have many sheds and shacks. Empty lots are ramshackle disorganised gardens with heaps of rubble. The town is a bit short on ladies and no amount of bush dances in the church have helped.

Town Buildings
Police Station - Sergeant Bulldog and Gumtree Bill run the joint and mostly lock up drunks and drive off punks. They run a small prison and a armoury for when the whole town need to be rallied for battle
Post Office - Mr Kookaburra runs the place with a young apprentice koala and also acts as banker and town crier. He is kinda close to a town leader which nobody wants the responsibility of
Waggontrain Station - where traders come to stay and fortify themselves from raiders. Run by Tammy and Shandy a elderly lady couple and who look after local orphans and are gossiped about by townsfolk
School House - run by Mrs Magpie a war widow, gossip, busybody and moral zealot who educates youths for free until they reach puberty or are very talented. She also teaches music and French a mystical language of the ancients supposedly used by the frog people across the sea
Weather Station - Run by Jack Sundance and uses the infernal engine to create rainfall over the village and surrounding area
Mannahill Hotel - Run by a older Koala couple Ron and Spazza who employ all kinds of oddball characters like Dick a bullterrier bouncer, Bazza a dingo cook and a bunch of humans Dan, Corey, Cathie and Derrin
Church - a multi faith church used by travellers run by Father Conner who has to be more openminded than he would like, a practitioner of Christlam
General Store - Run by Mr Mac and his wife Fanny and his rabbit shop boy Donny who delivers parcels by bicycle
Wool Sheds - run by Wooly Sam a merino ram man who keeps his wool only herds very happy and wins all the wool prizes and contracts. He hates the feral goat gangs who molest his sheep. He also is the town barber and treats all the children for lice and worms with foul baths and drenching every season

Other Town Characters
Gonzo the Goanna - a lazy scalliwag drunk who sleeps in the sun and begs for food. The kids find it easy to get him involved in crazy schemes
Bonkers The Wombat - a war survivor who is a bit jumpy and hates canetoads. He maintains the emergency water supply and brews beer and distills "medicine"
Bonzo Billy Bluegum - a naughty koala kid who leads all the local brats. His dream is to smoke a pipe or cigarettes like a big boy
Ranga McMuggins - Bonzos best buddy a slightly crazy daredevil and pest
April Bottlebrush - Bonzos love interest but she dreams of moving to stardom in Broken Hill. She is a star student and lives with Ron and Spazza in the hotel
Shazza Bluebottle - A retired barmaid and former beauty. Now runs a farmstead and still turning down suitors
Max Cowtip - the richest farmstead holder always in town
Gordo Chumwaggon - the poorest farmstead holder with his creepy inbred nudist family
Jacko Saltbush - a salt of the earth short but doughy bearded farmer who helps everyone and saves the town at least once a year, best friends with Mr Kookburra and Bazza. Married to Darlene who helps Mrs Magpie with the school. His kids Jonno, Stevo and Donna who are well behaved, heroic and sometimes save Billy
Bazza - a koala who knows how to fix stuff and used to explore ruins as a youngster. He is always pining for a wife since his disappeared and he looks after Billy Bluegum and And Ranga Muggins because they were expelled from school
Uncle Long Claw - a old tribal goanna who acts as the medicine man but he doesn't like the responsibility and wishes there was a closer better doc instead of the one in Cockburn. He is ashamed of his nephew Gonzo and wanders around town preferring to sleep in various secret burrows. It is a habit since he survived the goanna tribe massacre
Stringybark Sam - a tall galoot who fixes stuff and drinks lots. The kids tease him because of his stutter and narcolepsy. Sometimes you find him asleep or in a drunken stupor in funny places
Jocko McGuffin - a black highland terrier farmer with his wife Moira. He plays the bagpipes every morning and talks about the mythical land of Scooterland and is always hunting several mythical beasts one called the Haggis he wants to eat and the Sporran he want to skin and make a hairy mirkin purse. He is hard to understand at times and has several kids Mandy, Gordon, Patrick, Fiona and Bonny who all speak Strayan normally like everyone