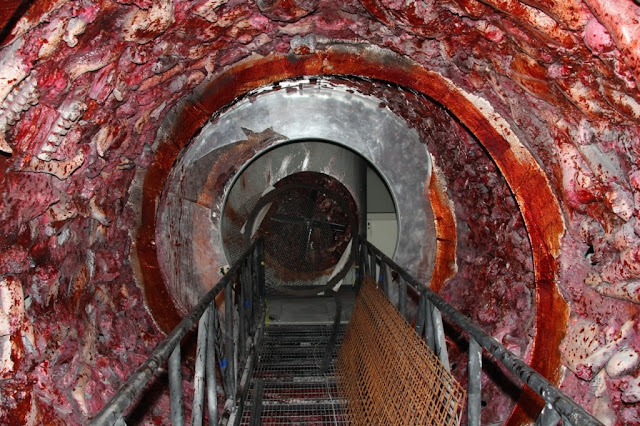 http://www.horrortalk.com/news/2830-eli-roths-goretorium-gets-new-toys.html
Has inspired some strange ideas

Following last Xor Decor post this is a table for intruder holes in Xor then to include the decor from last time in a d100 Holes in Xor table which is probably useful. Im running on tethered web and my new suburb has nowhere to buy phone credit. Im on bus to work 2 weeks in sydney so hopefully i get a new tower pc after and get back to fallout4. All my clients have paid up and months of stuff on my to do list done while offline a few days.

These are passages made by some outside force of Xor. They may have healed to some degree long ago. They may have moved far from the surface over time.

d12 Alien corridors of Xor
1 Made by a mole machine and healed to some degree
(possibly Law or some other planar force)
2 Made by passage of a great worm
3 Made by passage of a meteorite long ago
4 Metal pipes, steaming rust tunnel of a complex used by some humanoid race like dwarves
5 A mine tunnel from long ago for some purpose with bone supports and scared flesh
6 Tunnel from non human creatures burrowing for food (roll encounter at end)
7 Tunnel made by a destructive spell or ray that carved through Xor
8 Scarred channel made in some ancient attack from some titanic being
9 A blazing divine sky chariot crashed charring a passage, parts of it may remain
10 A infection from outside was sealed of by Xor long ago to be healed, now a dead zone
11 A alien parasitic entity hostile to Xor like a plant or alien flesh or gelatinous creature
12 Built by demons as a complex for their plots against Xor, possibly active still or forgotten