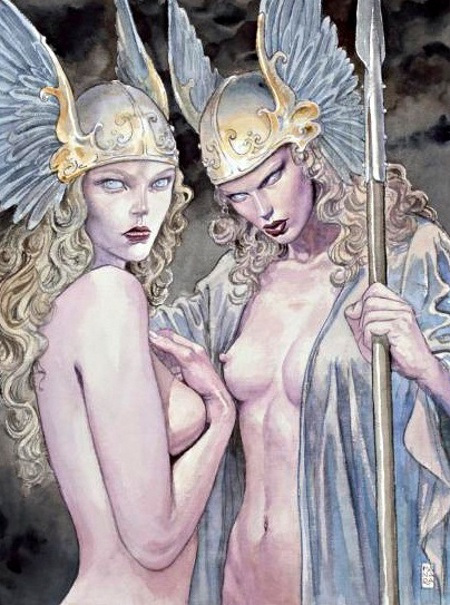 One tragedy of 4th edition was a survey I saw that had put the newer Eldarin race in more popular races and elves plummet many spots while dwarves remain as popular as ever. I wonder if elves were real if they would get the over hatred and fetishism? I like my elves a bit spooky and alien and dangerous.

A DM friend once said If you introduce a new skill or ability and everybody wants it - probably too good. If you invent a new race or class and it overshadows the classic material you have made something too good. Also a shout out to Devilmount for some interesting ideas. I guess I like my classic mythology so I find lots of names of newer races a bit silly.

As my game is BX based with race=class I let elves choose any one spell list or casting style instead of wizard so the could cast as cleric, wizard, sorceror, druid or psionics. This has been quite interesting. Spell list can equal elf type. Druid=wood elf, for example. Remember i mad a psioncs as a spellist like other types as I try to conserve mechanics rather than have new systems for everything.

My elves are remnants of early creation kin of the gods who helped them build the world. Their numbers and control of the world have declined but they can be found on many other planes even the underworld. Gods have elves as servants in their house holds as humans are too short lived.

So here is a list of my reskins for elves. Includes some simple variant elf types and some more major changes. Very little mechanical changes but possibly some follower substitutions.

Eloi
These are made to be playthings for pleasure and possibly food for morlocks. Have used in my psychon setting for years now. Most of the differences are cultural. Mostly hedonistic pacifists and don't ask question much. Used for morlock food or bred to live in bunkers or gen spaceships. Main differences are just skills mostly for pleasure, art and social life. Can be terribly ignorant of features of reality like death or violence. Tend to use sorcery.

Eldren
Eldren are my standard elves on Psychon. Bred to be space explorers for low gravity. In my fantasy game they are divine race close to the gods. Humans replace them long ago as main providers of mana and sacrifices for gods. Eldren live in isolated towers, dungeons and other planes many unaware their time has passed. Corum good example. Often have obscure occult and planar lore passed down through family, most only a few generations since the creation. Erekose a good model too. Many hate and fear Eldren and they are not really hostile enough to resist brutal humans. Tend to use Psionics or Wizardry.

Rowanac
Like eldren but used black magic to conquer the world and travel elemental and evil planes for power. Decadent and superior they are not well liked by anybody. Based on Melnibone in Elric. They left lots of gates and monsters in the world and mostly remain in a single terrible city waiting the end of the world. Conquest no longer interests them but most other people remember and hate them. Some peoples might try to emulate their more unpleasant traits. Magical lore common and prefer wizardry.

Devil and Demon Born
Never liked word tiefling. Did like Devilmount reskin of elves as hybrid devils. It works frighteningly well. No changes needed other than cosmetic and alighnment. Probably use more horrible spells, fancier armour and weapons. Attractive but obviously tainted. My Changeling race would work fine too but they dont fight as well or use armour. Like horrible skills like poison, torture and often have planar lore. You dont have to be evil, everyone will assume you are. Tend to use evil versions of cleric or wizard spells.

Elemental Born
Akin to elements from dawn age. Skin and hair colour related to element. Prefer spells of element type. Lost resistances from being embodied on earth. Can be quite alien and prejudiced to other elements or planar beings. They dont like being called fire elves or earth elves. They have unusual arcane lore and live simpler lives than normal elves. Prefer elemental based sorcery.

Dryad
All female sylvan race who always take charm spell and mate with satyrs or humans or elves or beastmen or gods. Akin to plants often with a green tinge. Other related types akin to the sea or mountains but basically immortal nature bound female spirits. ALso could be done with my changeling class with a tree form. Only older specimens settle to a single natural spot. They expect to be worshiped and waited on. They have no problem with charmed slaves. HAve plenty of nature skills and often skilled at arts like dance and social skills. Prefer druidry.

Moon Elves (and other celestial types)
Accustomed to fabulous wealth of the celestial moon palace where lunar gods dwell unchanging since creation. Pretty ignorant of worldly matters but some fall to earth from curiosity or are exiled.  Other celestial elves include sun elves and star elves. They all travel in the celestial spere in great ships looking down at mortals amd helping the mechanisms of the heavens operate. All ar superior navigators and astrologers. Prefer cleric spells as servants of the gods.

Bone Elves
These horrid elves of the bone forest hate humans and released plagues and planted forests over the depopulated ruins. Most are not aware they exist even other elves. Possibly they came from the deeps. They enjoy eating humanoids and grinding bonemeal for bread. They have goblin and ogre slaves. They like evil cleric spells or necromantic wizardry as they like undead.

Wood elves
These wild forest elves frolic with animals and sylvan beings, avoiding civilized humans and elves. They do not build they rather shape nature. Most have animal friends and tend to travel light. They even grow living bows, swords and armour. At war they are cunning and more savage than you would expect. They often shun clothing and wear body paint which to them is a complex language that tells about wearers life, rituals and moods. They prefer druidry.

Sand Elves
Live in deserts as nomads or in buried cities. They are kin to Djinn and efteet and have acording alignments. Their forests were blasted away aons ago and some chose to help the good gods and others serve evil. They have little material goods if nomadic and keep hidden from humans. When in a good mood they are very festive and the evil ones are terrible drunks and drug addicts. Some blame humans for deforestation. They are mostly sorcerers or psionics using illusions to hide or pretend to be humans.

Ice elves
Dwell in frozen wastes as nomads or in underground ruins. They are tough and put survival first. Some hunt ancient horrors that dwell in the ruins of the north. Tend not to use metal much except occasional meteoric metal. Some might breed with humans as they are very isolated and may live for decades without seeing own kind that are not siblings or immediate family. They dont speak much. They prefer sorcery or druidry.

Bright and Dark elves
Both sides of the same coin. Most don't know the elf king and queen are gods and spend half the year with bright elves and other with dark elves. They do not fight if they can help it adhering to ancient decrees of their royal gods. Humans don't realize this. Bright elves are good and dark elves evil. They both dislike humans. Bright elves look the part of beautiful, civilized and noble. Dark elves are cruel, decadent. They believe treachery and lies to outsiders is a virtue. Both surround themselves with modified forests even breeding orcs and goblins to keep humans away. Both live in giant trees but dark elves continue to live in roots and bowels of the earth. Dark elves are more nocturnal and use goblins slaves to grow mushroom forests above and below ground. Dark elves like undead and might kill farm animals and turn animals into zombies for fun. Bright elves use goblins but think them repulsive and keep them out of sight by night or in service tunnels. They find undead revolting, even more than humans who seem to age and decay before their eyes. Deep in their forest kingdoms the laws of reality fold and warp and interconnect. They are in fact far more numerous than you would expect it is just they more and more retreat into their sylvan plane where time flows differently. Both types trade with each other. Both types have employed human slaves with various types of lycanthropy. Werewolves make good hunting dogs. Many of their monsters and slaves escape to bother humans. They have own breeds of dogs, cats, deer and other animals which are smarter and attractive. Both types might colonise a hill tomb connecting it to the greater faerie realm. Humans might leave them offerings to keep them happy. Both prefer wizardry or sorcery.
Posted by Konsumterra at Sunday, July 17, 2016