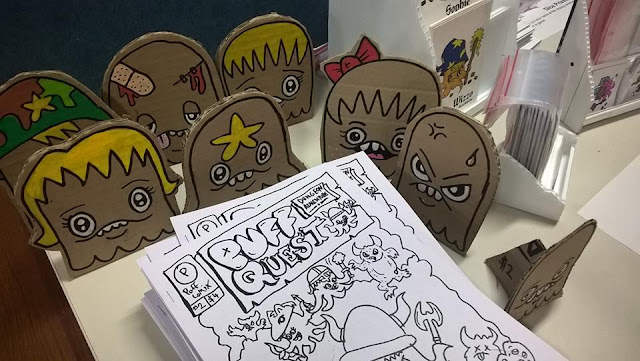 So I did con mascots on all the art (also recently did business card/logo design for boardgame online show). Got my new dungeon colouring book out but i suspect better off selling in groovy newtown. I have bee staying with smith family who have been organizing whole thing when in New South Wales (where Sydney is in Australia not in wales) most of year so im happy to help. Helped set up, hung with friend spoke to young guy who was interested in my talk of old dnd and rq and he joined in my kids game later as his intro to warhammer was a no show.

I sat at a table with other con volunteer and some lovely manga artist/writer girls included us in their creativity brainstorming workshop. I don't like to mention my years in comic biz and commercial credits or my nerd psuedo celeb status and played it humble. A guy butted n to advise them on brainstorming (more on him later). I wrote about a Island where explorers marooned and suffered then were rescued but were later hired by colonists and they returned to face new awful challenges. one guy died and other guys wife and kids died. When old he hung out in graveyard reflecting on failures of colonialism and resourcism. I did a map and some drawings.

After I did kids session joined by mom and young friendly bloke i mentioned didn't run warhammer and made kid the star. Two elves and a halfling investigated forest animal murders in one of my random dungeons beat up some kobolds, a goblin, a pig, some snakes. She had to drag others out of dungeon once back to hobbit hole to rest. Another boy joined in and the girls mum gave him her character  and helped him out. He went from "is this a computer game" to making thoughtful decisions in about three minutes. Hobbit found a gem that made them greedy and paranoid in bat poop which kids though funny. Rescued some hedgehogs and helped a gnome recover a magic pot that made army rations which he offered to pay them in for months. Hobbit found a plate of delicious sausages and mashed potatoes in locked trunk guarded by carrion crawler which made him free from aging. Was pretty fun. Mom was a gamer and boys dad was ex gamer looking for games. Gave them handout of free osr and openquest links. Yes I can occasionally be nice. 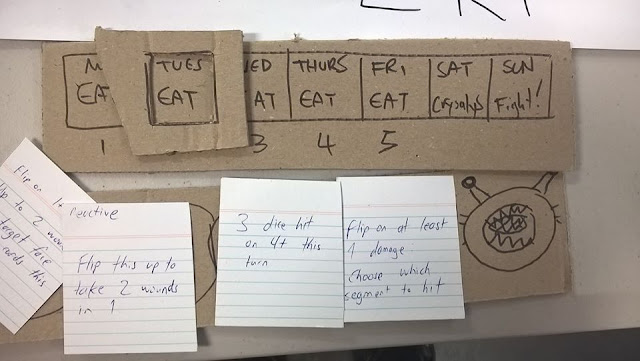 Later played a card game which i normally loath but was ok. Joined in a Iron Chef game design contest with guy who butted in the writing workshop. Took a while to agree but my first idea of gods making a world was repeated by other team so gladly went with idea of game about giant catapillars who mon-fri eat world and moon represented by booster cards then on sat go into crysalys and rearrange cards from best to useless and then turn over to hide. finally on Sun catapillars eat each other in battle phaze by rolling a dice per segment till segments whittled down. My graphics and cardboard props were praised and our complexity was cheered by all. Judge called it battlepillars which was nice. The winner was a fast simple game where office workers try to do the least work and sabotage each other. Made me think my idea about first day at new school might have been a good idea too. Cooperating with another person and us both trying to not steamroller each other was interesting. Went from paying him out a bit to getting along and I want to finish the game and make some varients. Personally id dump the blind card memory stuff and peeking elements but I admit he had card game maths better than me. We got good feedback. 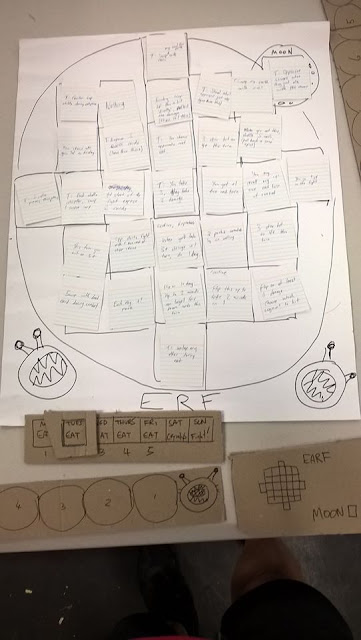 A pretty good day and got to do more interesting stuff than most cons. Could do with more punters but I appreciate them for doing stuff most Sydney cons gave up on years ago. Mascot merch not really moving but i will use in my art exhibit in about 3 weeks.

I offended several fans by saying now marvel, dc, dr who and trek have no consistant cannon I dont care about universes because will just change in a few years anyhow. I really am middle aged now. Im off home to beat my dinosaur slave and listen to gramaphones. 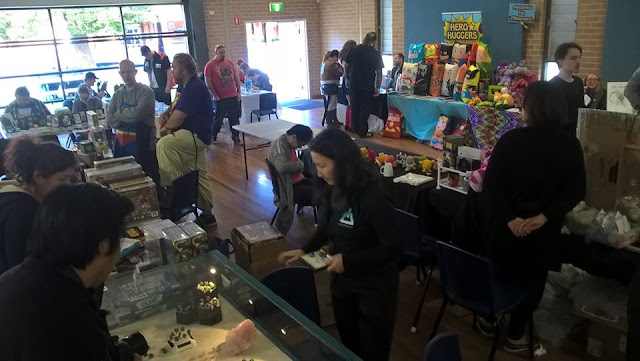