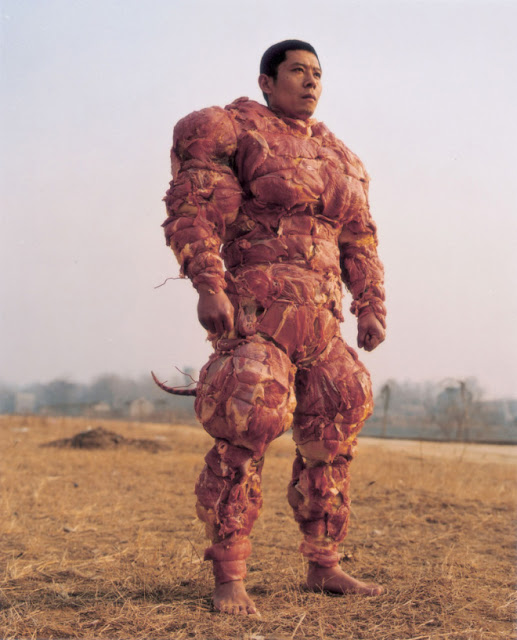 So most cases people will want to come from a normal DnD setting and find Xor growing in some distant region or get sucked there through a portal. Another option is to be natives of Xor. Also as normal adventurers die some might need replacing.

Heroes of Xor will not blink at the visceral horror of Xorscapes. The diversity of a normal world will be more disturbing.

Life on Xor.
Food is everywhere but locals struggle to find non meat items which do grow in places and get farmed occasional or traded. Meat of Xor even cut free stays fresh for some time and is highly nutritious. It also makes you connected to the spirit of Xor. Dairy product are also available in form of milk, curds, yoghurt and cheese. Other fluids of Xor are edible but disgust outsiders. Best not to ask sometimes.

Water can be difficult to find and some use and make filters to extract drinkable water from Xor fluids. Some have adapted to drink blood.

Clothing is mostly from Xor skin but clothes and armour can be easily fashioned from slices of undying meat of Xor and are easily replaced every week or when damaged. You can wear your rations! Nudity is acceptable and some people are heavily tattooed and pierced. Piercings are a good way to keep wealth.

Growing up on Xor is often collective. Gender and sexual orientation is irrelevant to Xorians. Some tribes have learned to impregnate orifices of Xor and harvest babies from the Flesh of Xor or just take advantage of places where babies or adults are born naturally. Many creatures can act as surrogate parents and baby sitters. These creatures would give outsiders nightmares but Xorians find them endearing. Communes are standard for tribal folk who collectively raise children. Some places let children do as they please in a separate village then adopt them into adulthood when they reach puberty or pass a test. The perverse villagers, towns and cities are more likely to live as outsiders do.

Water is a common trade item as well as iron or copper or useful metals. Decorative metals are less desirable and seen as outsider tainted. Permanent traders recognize gold and silver as good for trade with outsiders but barbarians are disgusted by them.

Character Classes:
Fighters, warriors and barbarian types are most common. Communities need guardians to defend communities from monsters and to obtain useful materials like arthropod chitin. Warriors know how to fashion and care for living armour and weapons. Paladins and rangers are uncommon and protect Xor from chaos, outsiders, monsters and broken eco systems. Monks are in tune with their own Xor nature and live in peace with Xor, but they are living weapons who protects common folk and sacred places. Monks are often naked and hairless.

Clerics, priests, druids and shamen commune with the world spirit of Xor and try to live with harmony within the living systems of Xor. Many will try to heal wounds in Xor and expunge cancers, bad mutants, outsiders and bad chaos. Undead are especially hated as anathema to Xorian life. Necromancers are despised.

Thieves and rogues are used as scouts and retrieve valuable things without resorting to disturbing or killing Xorian systems that autonomously  defend precious things. Thieves are knowledgeable in manipulating nerve clusters of biological gateways and using pheromones to calm guards and alarms. Bards are welcome and many play sinew and bone or living flesh instruments. They can pacify many threats and keep peoples cheer up and record oral history. Some cultures keep bard brains.

Wizards are knowledgeable on all kinds of arcane knowledge of Xor nature and lore but are seen as dangerous, corrupting and exploitative. They are more common with civilized people but many live in dungeons as bosses with their corrupt monster pets. Sorcerers are more instinctive and less literate. Their hedonistic lives and laziness are deplorable but more tolerated than wizards. Some people think all writing is wizardry.

Dwarves of Xor are hairless, often cannibalistic and live in the subdermal depths. They are masters at shaping Xor growth to make structures and tunnels and dont mind harming Xor to get what they want which causes problems. They are dedicated destroyers of demons, humanoids, chaos and bad mutants which is admirable. Some refer to themselves as morlocks who farm Eloi to eat.

Elves of Xor are of mostly of the blood type or bone type. Bone elves hate most races for being parasites on Xor. They create monsters and inhospitable zones and diseases and even encourage goblinoids. They wear bone armour and worship Xor as a deathbringer of species unfit to live in the paradise of Xor. Blood elves are cannibalistic slavers and drink blood. They are fanged and many call them vampires. They are cruel and murderous even feeding victims as sacrifices to the maws of Xor. Eldren are more peaceful but rare living in beautiful sculptured flesh citadels. Most of these are in ruin and the Eldren are unaware their kind are almost gone. Many used Xor as a means of plane travel so some still leave and arive. They often use metal and outside clothes, tools and technology gained during their long livespans. Eloi are hedonistic mostly clueless beings found in some Xor environments living lives of naked pleasure in some of the most pleasant and safe pockets of Xor or on farms of Morlocks. Al of these types may dislike humans or think of them and other demihumans as enemies but will unite with humans and demihumans vs Chaos, humanoids, ogres, trolls and giants.

Halflings are rare but tend to live near or with humans.  Insane tribes of halfling cannibals are a menace to travelers. Most are greedy for food and sex. More common are hairless guineapig men who are functionally identical and thrive above and below the skin of Xor. The GP folk are more likable and trustworthy to meet in wilderness than the desperate horrible feral halflings.

Gnomes of Xor live in subdermal burrow complexes and live harmoniously with Xor. Unfortunately they are delicious and mostly hide. They can be befriended and they help people but from secret. If you find a waterskin and a bone knife you might in fact be helped by gnomes. Evil cannibalistic degenerate gnomes are a problem and sometimes burrow under a settlement and cause trouble, eating villagers for years before being discovered.

Tako are intelligent octopid fairy folk and some colonised Xor successfully, even living in the fluid tracks and veins of Xor where humans cannot.  They vary in how assimilated to Xor they are from tribal worshipers who defend Xor and attack those damaging Xor to demon bonded chaos cultists. Some humans live peacefully with them others fear them. Some humans want to eat them or enslave them or are jealous of their sexual prowess.

Humanoids, giants, trolls, ogres are all common to Xor, a rival of the regular races forming coalitions against humans and demihumans. This has tended to unite humans and demi humans more. Beastmen work with both sides. The corrupted cancerous insane chaos trolls are hated but non evil types of trolls without madness or regeneration can still be found mostly in hiding. Flesh Giants and cyclopses were once were common on Xor and they hate and eat small folk. They employ ogres, humanoids and cancerous troll to destroy for them (and they eat them as punishment if they fail to bring them enemies).

The cancer trolls were once sane, mortal and one of the high races but when some tribes made pacts with chaos they gained their regeneration powers and now are entirely masses of cancer polyps insane with rage. Other monster people are wary of working with them. trolls are often mutated some becoming shoggoths.