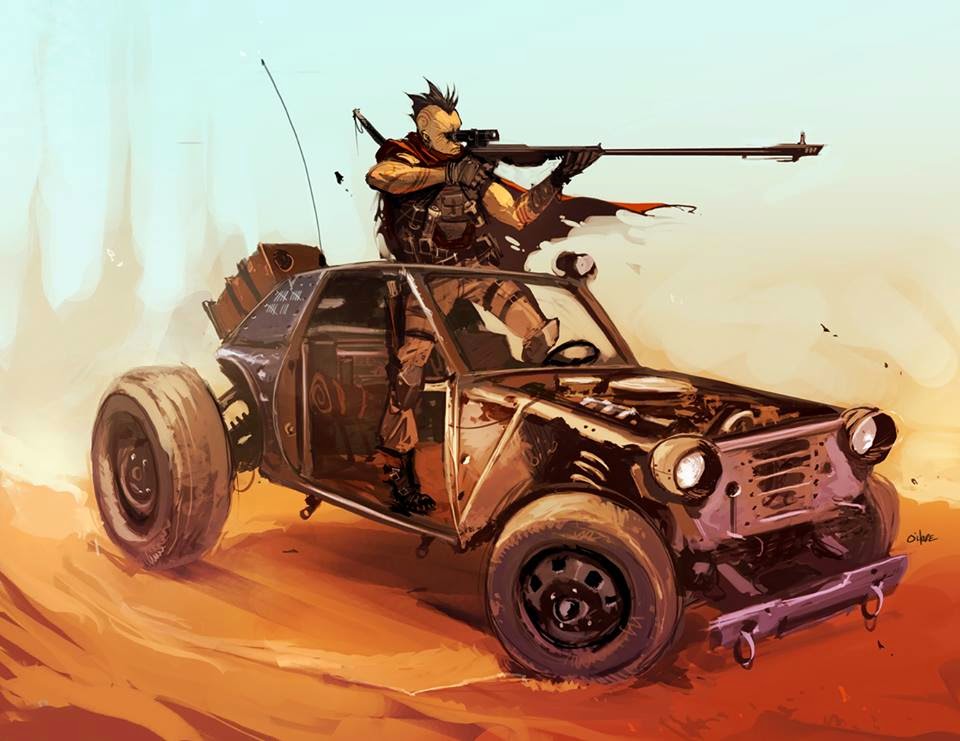 So the team were invited to the largest triffid muster in Australia ever by a farmer they rescued a while back from being chased by a triffids on a highway. So Karumi the ninja biker, the mutant in his ram buggy, sister Uriel in her combat Alpha Romeo,  a dodgy ex professor in his van and the Sheriff in his Interceptor went for the job.

Farmer explained he was being sabotaged and threatened by triffid rustlers so offered party 5% each if they helped get to market in Tamworth (home of biggest cuntry music fest in nation). Sister Urial had joined team as she had been murdering cultists in her spare time and found cult of Shub Niggeruth had farmers vege wrangler ads. She was convinced cult wanted to misuse triffids.

Farmer and his two daughters gave them a training course in triffid wrangling. Including the triffid grip tongs that two users would hold it down, while another person snips off triffid stings. Herd of 1000 were un genetically modified and free range. Farmer explained lead cars had triffid sound fx speakers to lure herd and other vehicles would nudge the stragglers. Other cars carried the kitchen, triffid wrangling supplies. Triffid food would be air dropped in during second week. Warned that wild triffids might join herd and try to lure off course or at least migh surprise some one. All crew supplied with triffid masks.

Corporate farms all had GM triffids modified restrained and plumbed in. Such farms were very expensive but our farmer had copied Sth American methods of free range breeding and had ammased a very valuable herd.

Met other wranglers. A herder car with a Italian and Spanish team of guys who were seasoned wranglers. A married couple who needed cash to save farm. A gay couple ran the kitchen truck. A couple of old hands from the farm in a big utility truck. A couple of girls from city who thought would be a good adventure trip. The farm security man in a buggy with two miniguns. A extra russian merc in a buggy. A couple of mercs in a armoured off road buggy. Team spent some time getting to know crew. Some team had to borrow off road vehicles for trip. Farmer and his daughters in ex military utility truck with a hatch and MG on roof.

So the two week journey began. Mutant in buggy scouted ahead with Karumi in case they had to talk way through anywhere. Most communities did not want a thousand triffids in area.

Day one found some corpses on road. A few vehicles had troubles off road avoiding towns. Some wild triffids joined herd and heroes had to search herd on foot. Tagged them with paint then killed them Wild ones smaller and more straggly.

One night heard triffids whistling oddly so the team searched the herd and found a whistling noise from distance. Found a camp of mutant cultists playing a flute. Karumi hid in woods while sister Uriel charged with her car and machine gunned the camp. A few stragglers climbed up hillock into woods and Karumi ambushed them. Interrogated mutants and they knew very little.

The proff in hi van kept inviting camp women into his van to play video games but they were all cheeped out by him. Others looked up his controversial books that got him sacked from his university job.

"Not my fault people misinterpreted my work"

A cyborg mate of party turned up to join the trek. He was a bit of a psycho if he heard loud noises but a good techie and killer.

One day found a crashed military plane wreck and corpse of a pilot. Sealed classified mission folder explained plane was searching for possible terrorist threat predicted (by classified means). Uriel called military and a copter came to collect wreck. She tried to convince them of threat of cults but farmer upset government might kill his herd. No explanation how pilot killed.

As team scoured rear for cultists, the sheriff took scout role and managed to deal with town sheriff in path. Eventually a gang with trucks and a bus and three cars began to follow team. Sheriff and Mutie headed to them. As the cult hunters were spread out the surrounded gang and launched a ambush. The lead gang cars tangled with Sheriff and the Mutie who rammed one.  The truck (intended to load triffids on) was jackknifed when tires destroyed by rocket and a following gang car hit the wreck. Karumi chased the bus and the mutie rammed it from behind and managed to lock into it. He climbed up and into back and started killing gang members. Karumi joined in the fun too. When the cyborg managed to flip out he rammed the ruined truck then got out to kill survivors with his steel fist. Other stragglers were gunned down. Two gang vehicles were taken by party as loot.

Less than a week to go with the Triffids....
Posted by Konsumterra at Wednesday, October 29, 2014