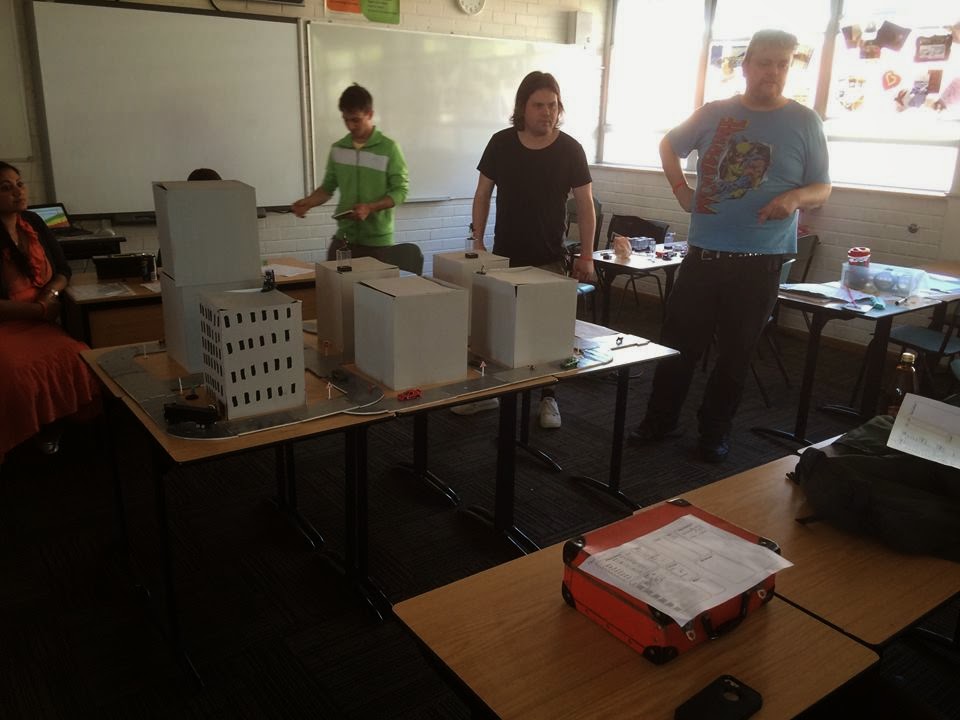 So my little city block ended up about 4 times as big as normal battlemap. Lots of matchbox and hotwheels cars, packs of street signs, my foamcore roads for my roadwar game, buildings that can quickly pack flat, some templates. Worked very well and will repeat. Next will stencil detail on roads and buildings. Could make double size next con. Will get more pix yet. Hero clix collection from club nice too. Have car scale bikes in use. Will get some car scale people standing on card. I got some truly awesome vehichles which im saving to spring on players. Dinosaurs are next. I need to make some shoggoths and get some mythos monsters next. Mars attacks game at con very tempting and the ruined walls sets look handy.

Marvel scale is a bit more abstract than most games i play. I will double ground inch movement rate next time as some players never got near Beyonder. Will open to all players and get assistant GM and a time track record too. More laminated universal tables and printed roster books too.

Will do Fall of the Mutants next time. I could Imagine doing Civil war, Atlantis Attacks, Evolutionary War and manu other events. Letting people play villains worked well and I made up cards with motivations to help give heroes excuse to fight. Secret Wars 2 Issue one was one of my first mainstream marvel comics (I only got Moonknight and New Mutants before that). So to recreate it was lots of fun. 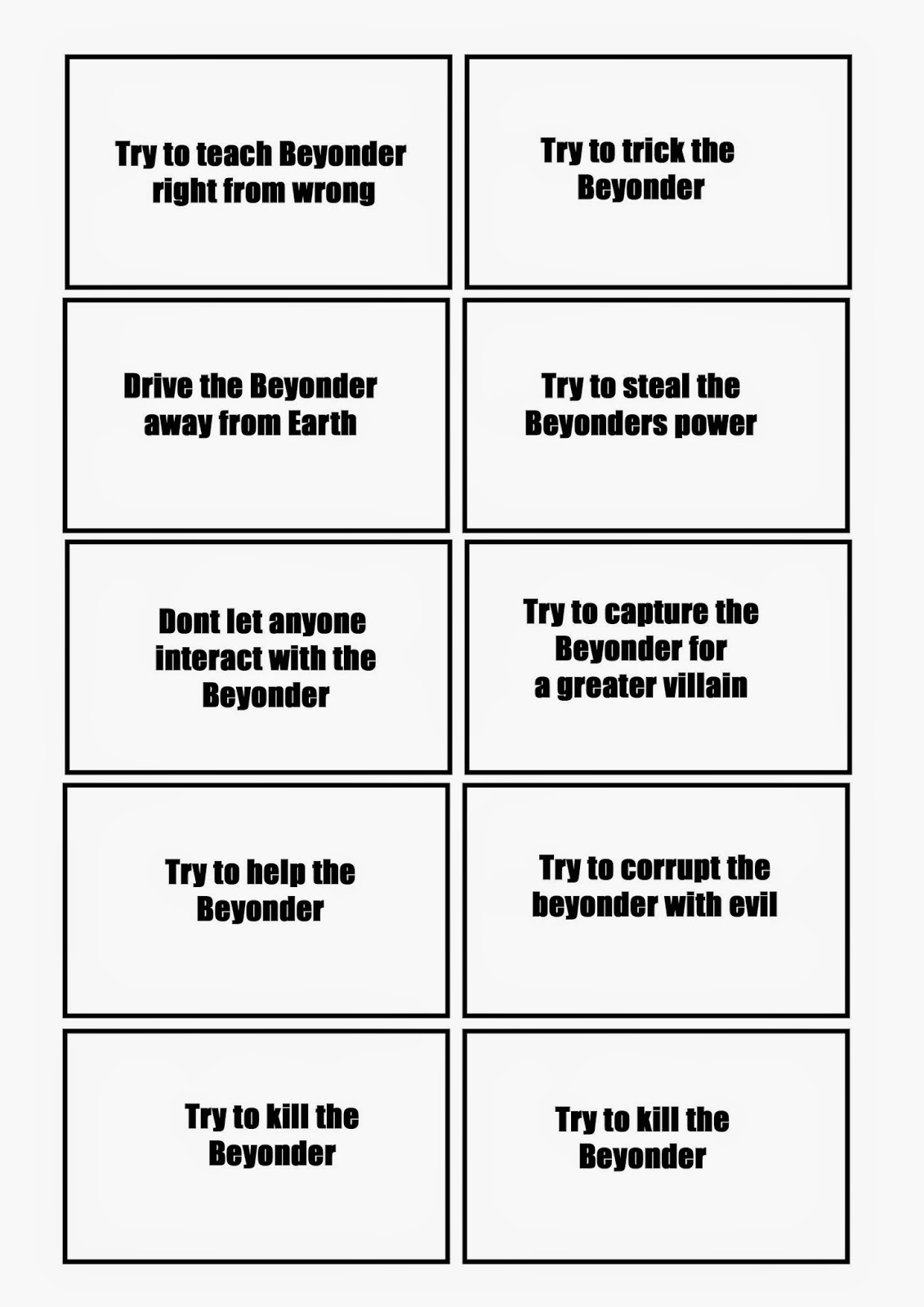 Left cards for good, right for evil. 2 booked in turned to 8 and second game had 7 players as two people from first game played again. Basically was a battle royale in L.A.  -

I gave each team or character motivation/mission cards to help promote fights between heroes and villains who might otherwise cooperate. I allowed teams to share motivations.

Basicly I planned first phaze deal with Thundersword, a jerk given powers by beyonder while he invisibly follow noblest hero about.

Phase two was to start when Thundersword down and swarms of cops moved into help which for heroes is really a bigger problem. This phaze weird sensory powers could sense Beyonders location.

Phase three the beyonder in human form starts to mess with heroes souls and hearts and minds. He will initially mimic most moralistic hero then get a silver boney M type jumpsuit and a terrible 80s mullet-afro. To defeat him you must trigger a existential crisis in him for three rounds.

Were a powerful bunch with hulk trashing a building a tank and a school bus while claiming Hulk power to not hurt anybody instinctively which I allowed (school kids all harmlessly fell out when he picked it up. Spidey and Venom got fighting and webbed together a bit till he escaped. Carnage came on scene and tried to kill Venom and Spidey. Ghost rider got seperated into Zatharoz and Johnny Blaze and Magic managed to take spiderman to Limbo. After spidey got out he punched Magik and she got in a fight with Ghostrider turning her into the Demonchild who tried to open Limbo and start Inferno but she got taken down. Meanwhile the Beyonder brought in Juggernaut to fight hulk which of course made him madder. Cap did a fine job of protecting civilian and cops and Magneto and Thor faught then teamed up to blast Beyonder who ignored it. When a Marine Harrier jet came on scene Carnage attacked it trying to crash it into the public but Thor Caught It and took Carnage to Asgard to finish him off. Magneto lifted Cap to the roof the Beyonder was observing havoc from and Cap managed to debate him into leaving.

Second session had less powerhouses with Wolvesbane, Iron man, Punisher, Ultron V, Cyclops, Maria Hill (with 6 sheild grunts) and Nightcrawler. The X team worked together but Wolvesbane kept asking beyonder to cure her mutations and whining. Cyclops and the Punisher got into a sniper fight while wolves bane and Nightcrawler kept running in and out of fights as they couldn't really hurt Thundersword. Punisher got into van and brought in heave weapons. He was actually under Ultrons control. Iron Man was trying to befriend Beyonder but eventually went after Ultron who wasted action trying to mind control Maria when he could have tried to Drain Iron Man's suit. So Iron man trashed him with power surge instead. Then Army shot Ultron with anti tank rockets and a fighter hit him with hellfire missiles. Ultron's influence was gone so free Punisher got into a cop uniform and fled into sewer unsure why he was here now. He told colps on radio with fake orders Cyclops was enemy no 1. Maria stole his van and sheild commandeered all the National Guard. They did chase Cyclops and Night crawler managed to disarm a tank while Cyclops gorily injured Beyonder's body making cops think Cyclops really was bad. Professor X through Cyclops tried to persuade Beyonder to leave while Wolvesbane begged him to cure her. Professer x had to convince Beyonder to not remove all powers of unhappy mutants after he considred  granting Wolvesbanes wishes

I gave instant Karma awards for dialogue and this worked well and was good to reward characters for not fighting but posing and arguing. Will use this again. Everyone roleplayed characters well and would bring up heroes personal grievances which was great. So will run again and will try to get some youngins in next time for even bigger battle. Will up move rate to 2 inches a area next time.

Gammaworld didn't run had one taker for 2 sessions.

I Played Spittin Iron, my friends wild west game where I played my gorrila cowboy.