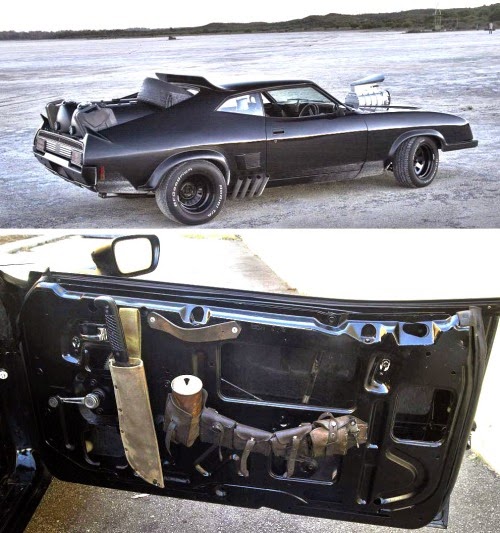 So the Triffid Muster is next big roadwar gig. But Sheriff in his former cop black interceptor had some spare time and took a bounty to the Blue Mountains to nab a parole absentee.

So headed into mountains and met up with the Mutie in his rust red ram buggy.

On way found a few odd things. Encountered hillside road with a crashed tractor and trailer on road with gap between them a patch of mines. Above this point was a tree with a parachute in it with a hanging body.

"i could jump that but I'm not tackling that without team" declared the Sheriff.

Lost 4 hours. Came across a attempt to cover road with oil and a gang nearby with flamer. Fired rocket killing and igniting napalm. Mutant went off road around flames and ran down guy with flamer, the Sheriff followed and ran guy over again.

Drove past millitia bunker and both saw light artillery piece 40mm cannon aimed at them from a concrete bunker hidden from most views on a bend with a rough gravel uphill driveway to road. Shell pierced rear end of Sheriff's car rupturing fuel tank. Both floored it around corner and stopped. While Mutie jumped out with a patch kit while Sheriff grabbed light disposable rocket tube. Red bunker militia utility vehicles came around corner in chase and Sheriff fired rocket. Damaged one truck badly and it drove off road and got stuck in crap at bottom of slope off road. As second car came in Sheriff got out his .45 magnum revolver and critically wounded driver who steered of road also.

Chased for 3 km after temporary patched fuel tank holes. Managed to shake guys off with help from machine gun nests from a town border guards. Drove on till got to rest and repair till next day. In morning went to meet Karumi the cyber biker girl but on way saw a wrecked car with a huge 12 foot tall roo corpse judging from rear.

Mutie got out his Gentech Buck Knife and licked his lips, days of free food and biofuel. Sheriff sat back wary as ever. He looked at car in good nick and went to look. Found driver missing through smashed window and a trail of gore and bloody handprints to a human skin pile. Huge beast leaped up. It was a big red roo-goanna hybrid that had learned to play dead to hunt. Huge Mutie punched it with his inhuman strength and reflexes and the Sheriff shot it in the head. The thing that shouldn't have lived was dead.

Karumi arrived and took samples for her company. Mutie hacked up beast and was impressed by the beast. Managed to arrive in town to see it was a gang town. Every car in town a red one. All Purple heart gang members. A zone vet gang about 25% with low grade military cyberwear limbs. Cars only lightly armed and armoured. Party sure they could take two or three cars each but eleven cars in town. Most of town in bar where the wanted man was picked up by face recog from a net image.

Man was towns beloved fry cook. They all boasted how they had got him out of jail. They assumed Sheriff and Mutie were gang members visiting. Sheriff told everybody the gang were cannibals who ran hospitality to other gangs. Mutie ordered a pork roast at unbelievably low price. Lots of the Purple Hearts gang tried to hire Karumi. She zipped her jumpsuit to her belly button and exuded her bio implant pheromones and hung out by kitchen door pretending to get a breather. Cook came out to crack onto her. His guards charmed by her let the couple alone and she lured him to car. How about handcuffs she suggested as she locked him in rear cage of the ex police interceptor. Guys all escaped with gang realizing what had happened..

A long car race of obstacles and ambushes was on. Some gang ambushes even helpful. Party set off traps which ended up worse obstacles to pursuing gangs. Finally got close to country town militia and team escaped gang wrath. Talked to town militia and thanked them. Town claimed wrecks.

Got to Sydney outer zone and collected $2400 for prisoner.

Karumi smacked herself in the head.

"All that for so little. What were you thinking you idiots?"

Was mostly filler session with 4 players absent but got lot done and car chases were fun with groups on map outperforming on drive rolls to get forward by car lengths. Every drive roll then a random road hazard. Several rounds of this worked well for several sequences. Sheriff player remarked game more scary alone or with only two or three players.

Triffids next game
Posted by Konsumterra at Tuesday, October 14, 2014