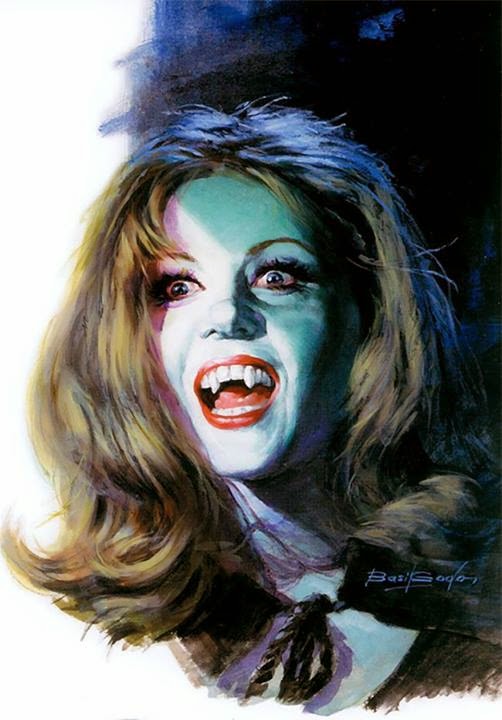 So Acula, his no 1 orc warrior woman wife, Nahme the Angelic relic bearer with her orc maid, assistant priest and linkboy theif opened the vault in the ghostwood. They probed other crypt and found no trace of evil or magic within so left it. Were seeking the secret lair of a famed evil relic making necromancer.

Inside was a shrine of a chaotic neutral underworld luck goddess. On top was a silver cup with silver coins inside. Room lined with sealed family standing vaults ten doors in all. Acula took the silver cup which others frowned at. Then he pissed on the altar. -2 Save curse for him.

As touched the secret vault lid that was really a well used hidden door, all the doors opened. Half bathed in daylight and the wights stayed within. But five melee range wights surprising you is a scary thing. The wizened horrors screamed and Acula and Olga the orc and Nahme got drained. Olda twice. Monsters half destroyed others driven through secret door by priest who can now possibly turn undead this mighty.

Party fled back from Ghost wood and to Aculas Tower. Then fled to renamed again Silverthorn village/dungeon as she was officially Mayor and spent thousands on village infrastructure.  Finally got to Shadelport and the temple that owed them thousands in healing credit as part of relic deal. 1600gp credit used in healing level draining and curse removal.

Poor Nahme gasped at cost from a good church for heroes fighting evil.

Having rested in their city homes, Nahme with her husband in their new blood rich district apartment. The couple looked at property to invest in, looking at more boarding houses that could be turned to virtue. Acula spent time with his first human wife (no2) and human kid. Life a bit boring here since the orcs and owlbear baby moved to his grim tower.

In city they met the plucky Tako warrior still fresh from the sea and ignorant of surface folk. He was seeking battle and adventure so they all set off through Silvethorn estates. Tako showed off is underground hume under village well that linked to dungeon.

Nahme tried to wrangle workers and money to finish her small manor (12 000gp) faster. But hard being a lawful good taskmaster. Decided should check out tower of gold the party saw in deed office and was nearby so party would look at on way back to crypt.

Someone mentioned that evil sorcerer Chondaru and all reminiced about wanting him dead.Oh that's why we were looting the Hobgoblin Halls to kill him. Finding all those relics was great. So now we are off to loot a necromancers lair in the haunted forest to place we know full of wights.Some head scratching here.

So found on crossroad some vendormen with boxes of travellers treats. Except no 4 he had sacks of last season turnips. Rest less shabby vendormen sold braces of sausages, another had meat pies and third had eel stew. Bought all goods and told to invite masters to send goods to Silver thorn. One told of the fabled gold tower (a bit more flashy than the City deed offering ownership for 10 000gp).

Party found it in hidden mountain forest gulley. An immaculate shiny gold tower six stories of 16 foot each. With a spire on top and all windows shuttered. Acula knocked loudly and claimed this property was open for inspection. A angry elf began to abuse them and it turned out they predate humans on island and don't recognise city claim. Nahme offered to write a letter to city law makers that city should acknowledge them. This and a free pie helped elves be less abusive. Party tried to offer them visit Silverthorn which intrigued them. Party explained Elves no longer can be murdered on sight in the Barony. So went on their way. Seems gold just a glamour. Possibly un-allied elves not from bright or dark elves. Party hope to try and deal with again as all in the same hex.

So arrived earlier in day 9am and inside crypt sunlight had sealed less crypts than last time. This meant two more doors could open inside. Saw two doors of vaults had remained opened, matching with their earlier kills. So entered ready this time. Five dead came at them and were not a surprise and some already wounded (I make undead heal as a human in unhallowed graves). So dead fell fast. The cleric who noticed his silver magic mace could reflect sunlight that annoyed the dead now had a polished his now silver plated shield. Sealed vault doors covered by sun and heroes pried open doors and killed two more wights with no harm this time. So nine killed in both fights total. Looted the crypts and found symbolic tools of trade and dress inside individual wight vaults.

Saw lots of undead had been walking around here

Down below found a barracks with zombies (easily finished). Robbed trunks for weapons and junk. Found strange urns on shelf. Each player in prayer to luck goddess for help meddling with such items. Acula found some scraps of gold leaf with animals stamped on it worth 3gp. Mahme had a foot wide spider jump out onto her which Acula shot off her with an arrow. Old ate its legs off while holding arrow in hand, looking at her hideous human husband, smiling. For a moment party was all liking each other. Octopus ad opened one to be covered in magical filth giving him mummy rot. Was put to safe spot in party and Nahme worried about the parties medical benefits at the temple. She would discuss this with the Sun Gods Patriarch of the Shadelport.

Opened into corridor and chose the more evil looking black door with silver metalwork. Smashed open and a filthy foul messed necromantic lab was behind. Bench to strap victims down. Alchemist array of glass work, filled with grey, violet and black dust. Coffins were in room which of course opened.

Party pulled back to lst choke point. Warrior zombies, dressed as knights with two handed swords and twice as strong a normal ones. Party filled with arrows and dead kept coming. Nahme and Acula hurt, Olga was unconscious. Found bench of 6 more urns. Nobody else but Acula were willing to touch. He got a nasty scorpion bite then a gem with continual light. Octopus got exited and tried one and got a spirit almost posses him so backed away to far end of room. Acula found some clay cult tokens, and some coins. Best thing was a screaming flying skull which he grabbed and re-sealed. Will be handy one day. Some dumb incense he found and gave to Nahme who saw it was a favourite of the gods from 800 years ago and rare today. This started a quarrel about loot division. A good thing to feud over while in a dungeon.

Other door in corridor was a living room. Found Wardrobes with necromancer robes. Another of noble ladies, one of sexy slave outfits and another stuffed with peasant clothes. The wardrobes magically preserved clothes and killed bugs entering them.The octopus decided to wear some robes or take some to wear later. If the freakish boils on him didn't kill him. Room had desk with writings about the evacuation 800 years ago to the Black School on Devil Hill.

Next room a library. Looted when long ago when lair abandoned but the Octopus selected many works to sell to those dumb guys who use spell books and study. He thought this undead human making could be a weapon in the great below-the-sea-war. He would appeal to his patron entity of sorcery for wisdom on this matter.

Final room was bed chamber. A big fancy bed with a eight poster giant spider theme made a nightmare  canopy. Covered in webs with elf spun spider silk sheets on a human hair mattress. Next to bed was a cabinet of delicious liqueurs  with narcotics. Including something called bone medicine. Was made from grated unicorn horn, now death sentence to possess in city. Another had strange devices and fetish objects Acula and Olga stashed in their packs. Gave each other funny looks made others feel awkward. Most amazing treasure was three of the wizards wives in powdered form. One rated evil.

Having looted everything on the donkey waggon the party was ready to go. The orc warrior women made great scouts and guides in the woods allowing the best route for a cart. On way something was stalking them. Acula hid and party moved on. Was a strange albino elf riding a silver warg. Accula shot wolf and elf cast a sleep spell on him. He resisted and shot wolf and elf as wolf actually charged and bit him. Party heard fight and began running back. As arrived Accula had been badly hurt by poison arrows and warg. Both down and he was ready to kill warg but wife convinced him she could hire wolf master or learn herself. Strange elf bore sighns of necromancy and chaos.

Took back to Accula's tower torture dungeon for containment. Elf was a bone wood elf, niether light nor dark, bound to death and demons and the cursed wood. They were kin and masters of the bone goblins. Part of the great mystery curse 800 years ago.

Heroes and flunkies rushed to city to heal the plucky cephalopod. Had lots of stuff to sell but went to the dodgy guy who buys any evil relics Acula has flogged off before. Bought lots of the fluff evil loot. Octopus bought a zombie halfling manservant. He wants to ride on his head wearing necro robes and pretend to be a mindflayer.

Necromancer was interested in buying the elf but they gave him to the secret police instead as both informants. Got given 50gp and Accula told well done for procuring the assassins tower for them. Gave him a black uniform of sub lieutenant and sent him home with security advisers.

The priest following Nahme is a bit forlorn as he has not been made a honorary follower of Nahme. He followed her previous follower when party serving temple and stuck around. When the acolyte girl died The young cleric assumed he would get job. Nahme snooping after new follower and considered the bone elf upset him.

All feuded over proper treatment of the powdered women. Nahme was persuaded that the women should be freed even the evil one. Acula offered to take the evil one and sell her to necromancer pal. More fantasy urbanisation, retail adventures and grave robbing next week.