Vikinglog: The Old Gods Hate Us 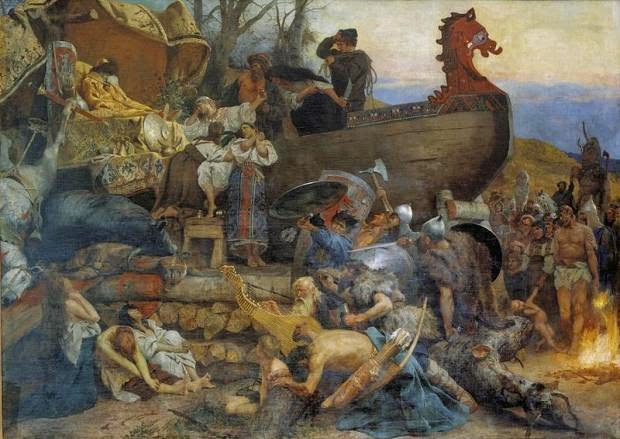 So the vikings managed to get help travelling from Mecca to Cairo and were met at border by friendly man Khalid who offered them accommodation and aid. Hrafn was having dreams of the Dagger of Thoth he took from a cultist in Irem. His own powers of prophecy let him see further than the cursed visions were intended by the dark powers. He was concerned by his fate.

Did some relic shopping and bought a jewelled scarab and some trinkkets as gifts back home. Around the house crowds of beggars were wanting to sell fraud relics and see the strange foreigners reputed to be rich trinket hunting wonder workers and giants. Khalid had his men drive them off but Throra saw one man make strange signs. She saw something in the old mans face and escaped to meet him. He was a priest of a Coptic order who were battling cultists and warned the party they were in clutches of a killer and madman.

He told her he had a plan to aid them but needed them to obey him. So she smuggled him in house and called Khalid into viking suite. Vikings grabbed him and tied him. The Coptic priest warned those wishing to not learn forbidden lore best not look. Most looked away but some saw him cut his hand, pour blood on earth and drew a sign on floor. A shambling wizened lurching thing, arose from the floor and grabbed Khalid and dragged him to whence it came. Vikings kind of wary of horror they witnessed but priest warned them if Khalid vanished will leave his servants and cult headless and confused. Party packed and left for the the south where ruins of Hrafn's vision village were seen. Really it was ancient Thothopolis. He had seen them as they were in past and knew the processional pathway to the temple of Thoth. As they crept through the night, hairy creepy sand men things came but party hacked them to pieces beyond recognition. They had killed these in Irem already and no onger afraid of them. Wendigos back home tougher.

Found a ruin with catacombs behind a secret door that Hrafn had seen in his dreams. Into the darkness where huge rats, cobras and scorpions attacked at every turn. A subterranean pond with crocodiles was a major obstacle and the vikings hacked them to bits. Hrafn got a sore leg but was helped to be mobile with Thora's magic. Deeper into catacombs with more rotten mummies and into a deeper level. Finally they found a dread temple of Nyarlathotep. Rows of haunting black sphinxes lined entry and heroes battles some ghouls. They did not feel pain or bleed but that did not mean they could not die if hacked to bits. Finally in the sanctum they met a Arab with a strange presence he asked for the knife of Thoth and the vikings refused. Briedr cursed him and threatened him. Hrafn lunged at him to stab him but man began to swell, splitting his skin, growing and erupting into a thing beyond comprehension. It blasted Briedr with eldritch fire for his insolence before Hrafn stabbed it. The being screamed, Its skin sloughing off as it grew and faded into nothing. The priest took the dagger, a elder sign and blood and used a ritual to cleanse Hrafn of the curse. Then Hrafn smashed the dagger. Johan had seen too much and snapped attacking them to defend the monster god crying for Njordir and Cthulhu as he saw they were truly one. His wife knowing this time would come bashed him from behind and other tackled him. Thora new it was too late to save her cousin and finished him while calling on Freya and the Disr to take his soul. Pleased she might have helped his soul she comforted the grieving widow Yvette.

Searched ruins and found the original Al Aziv (the other one they had was a copy from this). Battled a chamber of mummies with beast heads then left having finished work. Stayed with the Coptics exchanging wisdom for a week and gave them one of the copies of Al Aziv. Alrec having learn ed Arabic well completed reading it (his first non Koran book) and was now learning rituals to dismiss daemon sultan and other gods and Djinn. Several others had grown surprisingly resilient but those dabbling in magic and the Mythos were spiritually scared and weary. Got a boat to Spain and found one of their own slaver trade boats and returned to Norway. Ideas of trip to Ghaarne city of the Cthonians was quashed by recent horror and unwillingness to face great worms of the earth.

Over winter more studied magic. Thora taught many of the cousins new spells through Freya to everyone. She realised the Black Ice bear spirit, the Dun-man of the dream lands and the monster man in the hidden temple in Egypt were all masks of the same god.

Throa lost a child and a horse over winter and was melancholic. Birth of yet another daughter to rich husband who longed for one more son. He was keen to go to his last battle. She was now a master blacksmith. She made a new elder sign making parties total of three.

Hrafn was glad to be home and was feeling full of himself for thwarting the demon of the outer darkness. He was glad to have shunned reading and become sad like his brother. Thora trying to convince Briedr to become priest or champion of Odin. All feasted, glad to be in familiar lands again.

Alrec who learnt to read and speak Arab better than he spoke Norse was learning all the names to call and dismiss the elder gods. Al Aziv the Necronomicon is a great first book.

Come spring the band met in Iceland and allotted silver from family trade and farming and slave trading. Briedr dished out family shares in Arab and German silver were appreciated. Wondered what to do next as only 9 months till the serpent arose ending the world. The surviving monks half had become viking. They served as clerks of family businesses and were married into the clan as freemen. The monks of St Bartholomew who remained still christian had been slaves but now were serving vikings for God. They believed the Northmen would be able to stop the castle of the Leviathan from arising in the northers sea. All the past and present monks formed an advisory group on stopping the end of the world. If the great sea serpent can be averted from arising with his great hall, then the other events of Ragnarok will be delayed till the stars are almost right again in a thousand years.

They had an inkling cultists could be stopped and elder signs could help. Some of the clan wanted to raise an army and invade the rebel colony beyond Greenland or even the clan who robbed them a decade ago. Others said Jotunhiem could provide more knowledge in the north. Giants sound worse than crocodiles and trolls thought Hrafn.

Thorhadr of course wanted to go to France as he knew where to find a book of Eibon as Tsathogua had instructed. Others less impressed by any advice from he great Skald. He is torn between Tsathogua and Hiemdal cult. His kin call him Loki lover but he is doing what he thinks is best for everyone and thus Loki favours him not. He belies the rivalries of the old ones can be used to fight them. Nobody else thinks this is so.

Johan's huge wife will take his place at the helm as she is a mighty woman second only to Hrafn's wife a descendant of legendary Siguard. The two women are beautiful and stronger and larger than any of the men. Thora the Freya Priestess is still a famous redhead beauty while Thora is famed for fighting and ironwork not her looks which are merely normal.

Agreed to go to Norway to raise an army and set sale from Iceland. Then worst storm ever seen came from north. Surrounded them in winds and a waterspout lifted them into the sky. Wind carried the Wavebiter up and up into the night sky where the saw the earth curve away and grow distant, into a shere then a ball then sweeping them into interstellar space. Aurauras swirled around them and then they came to a new sun and a new planet and a new sea.  Stunned they looked on the alien sea.

Iquatha had his revenge. The gods would stop the meddling vikings at last.

With strange new stars to guide them they sailed on. What would they find?