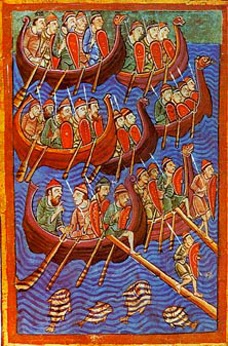 So the vikings had travelled back in time and gone to backwoods to Rus and Novgarod to prepare themselves better than the three months left in their native time stream.

Thorhadr the skald had spoken to his god Tsathogua who warned him not to abuse time portal or the hounds of Tindolas would hunt them and destroy them body as soul as if the never were. But Tsathogua said friends wouldn't notice if he went through gate an extra time for two more years. So he spent time with reading blasphemous books and eat human flesh to retain his youth, The friends would never notice. And the hound thing risk minimised a fat bit. With Extra time he stole the book of Eibon from monks in France and was given the means to travel beyond the earth. He learnt more magic songs and his ability with them could teach and lead others who joined him. The marching song of endurance was most popular with others.

Most learnt magic of some kind. Thora taught her cousins all he spells there thick skulls could keep. Hrafn had been teaching each others to activate beast totem forms. He was always in his wolf helm, looking grim, Ready for doom ahead. He had taught his wolf sons to become humans and was teaching them to fight. Lots of werewolves in Rus. Enters battle a man then becomes something horrible in battle. An Odinite werewolf beserker.

His brother Alrec the Unruly was now convinced Al Aziv the Arabic Necronomican is the one and only book for all time and given him power over gods instead of letting gods pick at your fortune like flies. He was sure would ever be a champion of Thor in time so it was sorcery for him easily the choice, It was kind of strange he became so adept at Arabic since meeting Arab merchant when young.

Briedr having the pleasure of rebuilding a fortune, becoming more tattooed and learning to work with his battle goat companion sent by Thor to aid him. Remained in Rus for the moment.

Thora was pleased to have a daughter first child in years and first with this husband who had been good for so many years. Now she could spend time with him on his business trips to Rus that she had missed him by remaining in Iceland with her cousins and adventures. Cheating on herself with herself. Has been magically preparing herself for final fight.

Throa finally has a son why seemed odd and sickly at first but since thrived and fat and jolly. Her husband would be surprised when she returned home with a two year old son. Could make up some story about making him give girls good dowries. Working with metals and runes. Loon creepily suggested his new gifts from Loki to shape shift meant he was real father of child while he was in disguise. She knew if anything it was during her brief visit o land of the dark elves.

Yvette was hoping to gain some status with the Cult of Njordr the sea. Was striving to replicate her heroic husband that made her part of the Stonedales. Has a colony of friendly sealions in Rus.

So party returned changed and two years wiser (none knew Thorhadr now has a Cthulhu mythos beyond %50 now and was in fact 4 years wiser and a cannibal).

So assembled many ships with two warship of 50 men sworn to them. King of Norway sent one of his ships for years of work they had done for his wars. Other families who had prospered near them or been saved by them over the last 11 years came too. Eleven years adventuring that's 13 for most of party or 15 years for Thorhadr. It was all coming to an end soon. With six ships gathered and ready to sale heard how ally had died. Sailed to Iceland. Different stories heard of death but real one told by widow to party. Hero was dismembered in battle by mad cannibal men of Vinland, Party enraged set sail. Arrived though a storm and a ship missing lost all hands.

Five viking warships followed the shore. Saw three small ship trying to stay out or reach. Heroes ship went forward with one other, other three went back and around. Sure enough say three trying to lure into groug of three war ships and three smaller longships like the greatly missed Wavebiter they hap too leave in space. Heroes charged to wipe out small ships to find fish men attacked with three small ships. Bigger rebel fleet of cultists closed in, a mix of fish cultists and demon of darkness cultists and viking wendigo beserker cultists. So fishmen surprised they had attacked boldest of the fleet who all sung as they quickly shattered the surprise attack and the three boats. When the big group came with 300 men their formaion was broken between both groups of the heroes surviving force a total of 250. One viking ship sunk but most saved by kin. As apparent to all 0that party winning, cult on shore summoned a waterspout to strike the fleet. Breidr saw this with his far sight spirit spell then he called on his god Thor. A bolt of lightning struck the high priest exploding his charred body and driving off the cultists.

Vikings came ashore and saw mound with steaks around the multi cultist village. Led best towards fish cult on shore while other group attacked wall. Th fish men and viking with them proved weak. The heroes had superior weapons, armour, skill and magic. Fish men butchered on beach before summoning complete then led horde onto wall. Alrec jumped wall while rest hacked down with pole axes.

Inside saw other tribe and outlaw vikings fighting the second group of the heroes force that had gotten through the wall. Alrec saw something amid the breach, a whirling whilwind of destruction, a avatar of a dark god. Alrec lept over a wave of troops after his friends still behind him. Then he lept with the mighty sword into the battle.

Others following Alrec hacked their way on. Hrafn was now a were wolf, with his runes to Odin awakened. He swam into the battle like a salmon, killing everything and fearing nothing. He had gone beyond the berserks he cheered on as a boy. He was a monster of Odins fury, a beat fit for the end of the world. Alrec managed to strike the avatar of the demon of darkness down. He knew what it was and it was a reliability weak form. It did bite him but not by much. Superior armour won the day and the cult was destroyed. All cult were killed and burned with their diseased unwholesome livestock and crude hybrid style culture of Indian, Eskimo and Norse. Found a boy possesed by local spirits who told them where cult was based up river. Next morning visitors from outside tribes came and helped vikings destroy several more homesteads. These locals explained they all hated these tribes.

Went up into hills and found forest of flayed human skins in trees and piles of corpses. Slew them all including beserkers of Iquatha they had let escape years ago. Another Avatar of Nyarlathotep came but heroes had no fear with magic weapons slaughtered the cult queen in demon god form. Found body parts of their old friend and freed sacrifices. Burned everything.

The heroes declared that none would settle Vinland again for a hundred years. Or the Stonedales would come back to kill them.

Went past Greenland and exterminated the cultists there too. It was revenge on every enemy viking since their first battle.

Arrive in Iceland to prepare to sack the city of Cthulhu!
Posted by Konsumterra at Wednesday, June 25, 2014