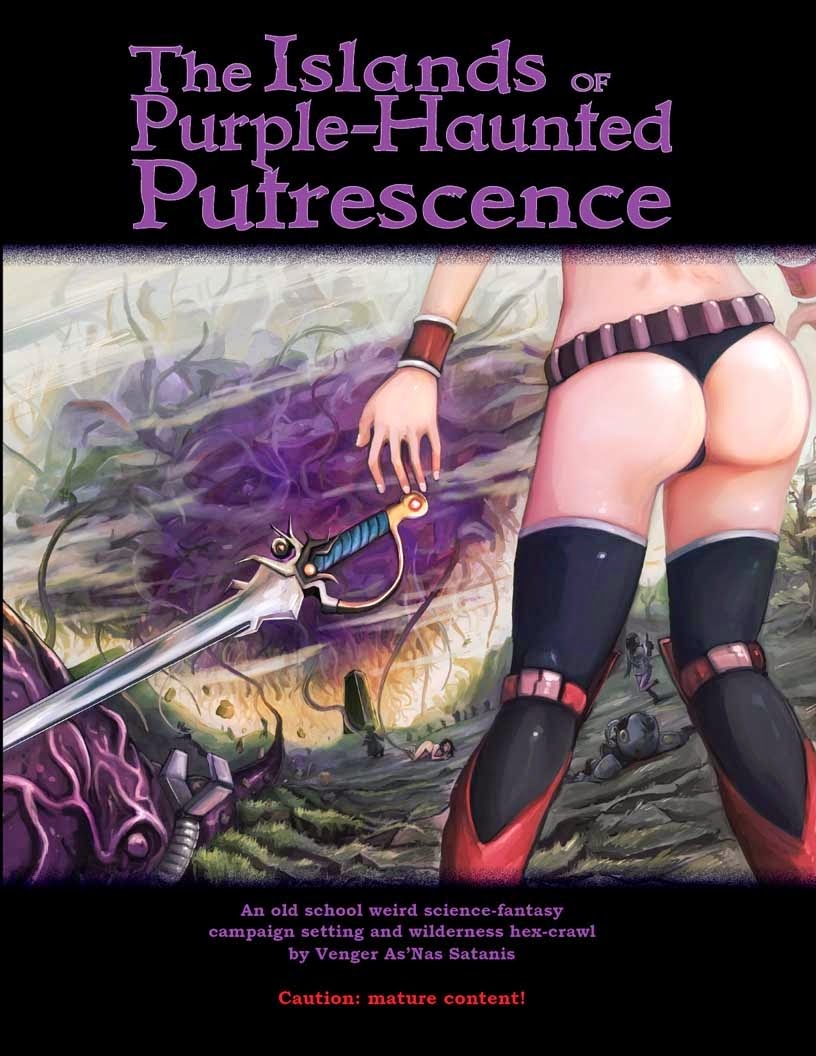 When i first saw this i thought was going to be like Liberation of the Demon Slayer. I was thinking I could fit in my planet Psychon game or with Anomalous Subsurface environment. The libation book would in with those two products fine. This new one goes somewhere quite different and altogether stranger.
I saw the map of The Islands of Purple-Haunted Putrescence first and was surprised and charmed. Crashed space craft everywhere. Mysterious things. It satisfied my Clark Ashton Smith sense of weird and suggested science fantasy and mythos and more. Even a bit of star trek. In fact it would be a nice holiday for adventurers from Carcosa.

It had some things in common with previous work. A section of local rule mods. Some which are quite good and a bit more deadly. Others lend to the 70s occult fantasy genre. One rule a bit macho for me but has its place in lots of 70s fantasy and amused me even if not all of those literary antecedents did. Are interesting and a few inspire some stuff for my game.

The background tables are truly awesome and awful. A few will outrage some players. I like that the island has own rule mods from local chaos. I like idea of localised rule mods. Dr Strange would be more at home here than Merlin. Some possibilities on tables are world breaking and a challenge to DM. The setting is weird enough your cop out world fixes will seem plausible here. Characters with magic face awful risk to themselves and the world.

Gods, elder religion and more details of setting are really interesting. Some might gasp at some elements of this content so you should probably look away. Some nice art too. Some professional. Others have weird naive intensity of 70s zines and retro weird fiction. It is all lurid and enthusiastic. Nice maps by Dyson.  An all round good product. Refreshingly adult and occasionally a bit nasty. Good to see campaign detail like this and rule mods to suggest local genre flavour. Everyone could learn from this.

The Adventures are taking longer to digest and I will keep reading in detail. The hexcrawl is marvelous. First book Ive got in a while I really wanted to run. Very satisfying product and glad to see success of kickstarter. It would be exiting to see a adventurer party from a nice DnD setting wind up stranded on the purple Islands.

One of my favorite things rpg.drivethrustuff.com the last two years (need your adult setting on log-in).