What alignment is this dungeon? 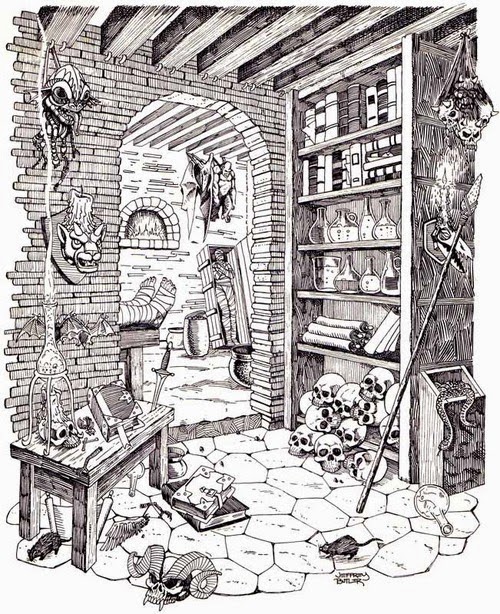 So for those anti alignment fans this wont bring you joy. This is quick way of exploring the otherworldly taint of every dungeon. It provides a quick way to differentiate dungeons or parts of them. Some dungeons are sentient or influenced by plains or at least have a leader with an alignment.

A dungeon might be built for one purpose and be repurposed by another. This could have happened in past or be in middle of happening.

I have detect alignment abilities pretty common. A good room in a monster hellhole is possible or remains of good, defiled by evil possible.

Alignment on the law-chaos axis is a measure of how a dungeon is organised.

A lawful dungeon has:
A sensible ecology
Toilets and food supply
Map makes sense
Things have a function
Follows principles of design and engineering
Internally consistent and logical
Things placed deliberately by reason
Grows on principles of cause and effect
Monsters restock over time from processes and cycles
Intelligent deliberate design
Well maintained and clean
Inhabitants behave in logical manner
Exploits and controls
Homoeostatic systems, patterns or cycles
Population tends to stabilise

A chaotic dungeon has:
A random nonsense ecology
Basic needs of inhabitants ignored
Map might make no sense
Strange bewildering or pointless contents
Might break common laws of physics, geometry or engineering
Random and inconsistent
Things just appear and disappear at random
Spontaneous random growth
Restocks by magic
Mad or insane design
Run down with dug and graffiti
Inhabitants are insane and irrational
Confuses and mutates
Chaotic, unstable and fluid
Population tends to boom and bust randomly

A evil dungeon has:
Is equipped for sadism and cruelty
Have innocent prisoners in cells or torture chambers
Creating monsters from unwilling victims
Evidence of victims like blood, skulls, blood
Macabre trophies like pile of severed heads, bloody altars
Traps with delayed effects or that imperil trapped victims
Monsters bully each other in brutal manner
Evidence of defiled goodness
Screams, moans, evil cackles of bosses
Inhabitants are scarred, maimed and hungry
Inhabitants are angry, violent and mean spirited even to own
Dominates and abuses
Expansive, selfish and warlike
Population tends to aggressive

A good dungeon has:
Is equipped for healing and self defence
Have evil creatures imprisoned and well cared for
Evidence of reformed evil doers confessions and atonement
Evidence of healing, good altars and noble self sacrifice for others
Artworks depicting good deeds and heroes bringing benefits to people
Traps which trap victim for later questioning
Guardians act in self defence, warn enemies and use fair play
Evidence of purged evil
Singing, chanting and prayers
Inhabitants are well cared for to best of leaders ability
Inhabitants are kindly, helpful and care for own kind and sometimes others
Helps and Protects
Defencive, harmonious and compassionate
Population tends to be peaceful

A middle dungeon might have:
Both good and evil features based on necessity
Good and evil in a struggle between factions in a war zone
Good beings trying to convert evil ones with kindness and love
Evil beings trying to taunt and enrage good beings into anger
A prison for possible reformed evil and a execution block for those deemed lost forever
May unite using best of both to fight intruders then return to conflict

Also consider...
So by now your thinking a good dungeon sounds totally lame and deserves to have monsters over run it. Which is a credible point. A good dungeon might be a base for good defending itself from evil. Perhaps wicked adventurers have come to steal poorly guarded healing potions. Perhaps they hire other alignments to do what they wont like kill prisoners they cant afford to keep and will do evil if released. Much like many religions hire other faiths to be butchers to avoid bad karma. Of course when war over, mercenaries might need to be paid to leave.

Lawful dungeons can be hacked by upsetting the systems or patterns or internal communications. A Chaotic one is more likely to depend on a relic or individual or magic to break it.

Sample Alignments Dungeon Types
Here are some tables to generate alignment features. Note the good ones are kind of struggling. A post on dungeon bosses and possible sentient dungeons will follow.

Obviously the dungeon ones below are to create stories where adventurers invaders mostly.

1d10 Good Dungeons
1 The dungeon was good long ago, spirits or hidden objects or secrets might still aid good
2 Provides healing and growth to factions despite alignment difference
3 Remnants of good are hidden within and can rescue any who could aid them
4 Dungeon is a dummy and helps the forces of evil because it is deluded by lies or magic
5 The dungeon is mad, none are pure enough or good enough for it so it kills all
6 This place is cursed and crawling in horrors but actually they guard something for good
7 This was a place of healing and peace from long ago now fouled by wicked occupants
8 The dungeon has been tainted by curse or magic and can be cured
9 This was a holy place for  religion like a temple or mausoleum
10 This was a place of shelter from apocalypses, wars and monster swarms of olden yore

1d10 Chaos Dungeons
1 Tainted with filth and disease, covered in sewerage and garbage
2 A place of madness and despair where insanity influences all inhabitants
3 Shambling and decaying structures full of rotting old goods
4 Flooded and dripping, hazard makes some places isolated and damaged
5 Covered in fungus, slime mould and vermin
6 A monster generator artifact is creating creatures that fight over lair space
7 A gateway brings in additional support from other planes
8 Caves connect this to creatures of the depths who constantly pour in
9 Monsters are trying to create a boom with breeding program
10 Mutanagenic fields of chaos warp and change inhabitants

1d10 Law Dungeons
1 This was a prison where many were locked up and punished
2 This is a base camp of a disciplined military faction from foreign power
3 A fanatic cult of assassins live here in a life of obedience
4 A balanced ecology of creatures is sustained here
5 Inhabitants highly disciplined cult, order or faction with uniforms
6 Built as storage and factory with remains of tools and workshops
7 Cosmic law built as bastion against disorder and chaos
8 Complex had practitioners of exotic technology
9 Complex was a machine or automaton in past or some kind of vehicle
10 Originally a mine where workers dug in the hundreds before abandoning

1d10 Neutral Dungeons
1 A nature cult or druids made as a place to hide rites and breed creatures
2 Selfish band of greedy adventurers built this to keep their treasure safe
3 Cosmic balance agents worked from here to maintain the cosmic order
4 Here elfland had a bastion into our world leaving many faerie relics and beings
5 Elemental cult here kept harmony between the inner planes
6 Spirits from the others side haunt here, once a great shaman place in megalithic era
7 Was a buried settlement covered by disaster or age with different occupants
8 A mass of drains and sewers from some lost city with no surface remains
9 Ancient tunnels dug long ago or extended from caves
10 Was once a market place and storehouse until over run or neglected
Posted by Konsumterra at Monday, June 16, 2014