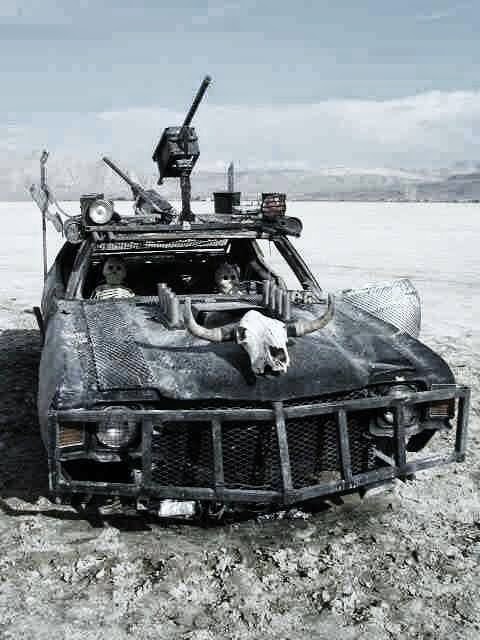 The roadwarriors were gettling paid to protect tiny town from sand devil gang cult. 50 km from fortified remains of Bathurst the team arrived at towns and met no opposition.

Four hectares of land with razorwire and mine surrounding it. Inside was a biofuel slurry plant. A barn of specially bred wonder organic sheep. A 4 story greenhouse and solar plant. A walled complex with town workers, sheriff office and bar. Town run from bar.

Others in team found mine entries and capture spy messenger and car. Filled car with bomb and drone parts to turn into suicide bomb. Scouted entries and interrogated prisoner to get rough interior map with fuel plant and garage. Also captured car had transponder to deactivate mine field.

Party decided to break blockade first taking on ten bikes and a renegade interceptor. Bikes were rammed
and machine-gunned easily. Nun had her windscreen damaged and was left with slugs in her suit. Looted remains and got enough transponders for party.

Plan was set and after hours of useless squabbling party chose Mutant to drive n disguised as ganger with ninja and bike on back of his renegade rammer. He passed as gang member and got in. While he dropped some backpacks of explosives around ninja girl set charge in bio fuel plant and piggery. As rest of party began sealing entries and moving to position the remote bomb car sealed an entry after the ninja girl escaped on her bike. It was silent which proved handy. The mutant ram raider in the mountain after bombs and fire started broke up groups trying to escape only exit as caves filled with smoke. Outside team fired burst after burst at escapees, killing dozens of pedestrians and bikers. Bigger cars got damaged and crashed, or burst into flames. one came at team and had wheels shot off. Team airship drone fired several rockets destroying all in the kill zone twice. One cyborg with grenade launcher went crazy and charged even punching a radiator and got run over for trouble. Other crazy cyborg dragging off female prisoners while his sobbing therapist followed  begging him to behave.

Nun and muto in gas masks explored inside and found sand bat altar. Came out and she made satellite phone report to Vatican demonologists. Rest of team led townsfolk in looting the dead and taking prisoners. Lots of hangings later the mutant swore to follow the nun. Party celebrated, got loot and ammo and fuel then drove off into wasteland looking for trouble. Town sure without bandits they will be able to pay to be on airship trade route.

Fun and violent fun. Suitably crazy characters. Now a fortnightly game for a bit. Will escalate in fire power and antics.
Posted by Konsumterra at Monday, June 16, 2014