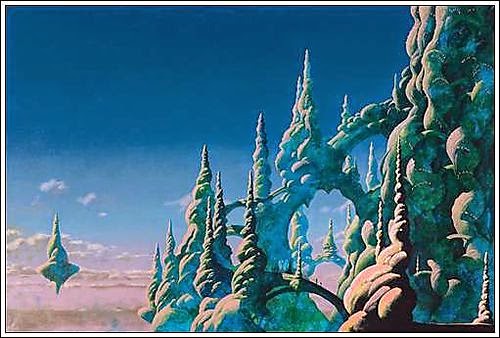 So ran a extra game queens birthday (hatching) long weekend of Planet Psychon which has been a while. Good many keen for this and a newb Hanna too. Character gen took a bit as all started 4th level and wanted followers maxed out for 5 players and 15 in party all up. Went well and keen to do again.

Haldamir a eldren moon priest with gold skin, turquoise hair, huge pointy ears, and antenna. A holy healer with a butterfly familiar, a riding cassowary and a pocket pony that can grow to full size. Has bone plate mail. Began in a sea crossing rafts of sunken ships and giant kelp till found land and a mountain.

Forlina a eldren sorcerer with violet skin, magenta hair, scales and a bulging codpiece. Has a cherub familiar, a riding violet dragon, a clockwork swordsman and a sentient crystal who offers motherly advice and enhances his night vision. Has chitin mail coat and a magic shield. Began in a land of glass towers being chased by a massive land leviathan tank size of a town.

Tsaern Zodak a monk with two wakisashi, bronze skin, punk multi coloured hair and huge pointy ears. Has a ferret called scratch, a goblin called Twitch and a insectoid 12 legged horse. Began being chased by a gang of feral kids with pet t-rex into a lightning filled canyon.

Doc a blue skinned thief with frizzy gold hair, ancestral tattoos, a 5 foot prehensile toungue and a riding flightless bat. Was a 20th C scholar who vanished in a temple portal. He has a good collection of crap and is 3rd incarnation of this thief. Was trapped on island of forcefeilds and holograms but escaped on bat creature who avoided maze easily.

Ulysia a jet black unicorn shape shifter with cat eyes and sharp teeth. Wears a coconut bikini and pace blanket cape in some forms. Has a silver tracking dog and a trap expert kobold. Has a magic javelin. Was a 21st century human called by cosmic balance to Psychon for some crazy reason they did not feel fit to explain and placed in a new body. Distressed by ancient memories being replaced by local false ones.

So all met in mountains over a great swamp hex with tangerine water, blue soil and emerald trees with violet bark. Swamp smelled of bread, beer and sandalwood. Could see ruins and agreed to investigate. Hear clanking and noises in forest of beaters driving games for hunters. Saw halflings with pots and noise makers and questioned them about land. They came from great citadel and had to hurry as masters displeased.

Met snooty masters riding purple scissor beetles. A blue lizard man, a tangerine man, a white goblin, a violet halfling and a tangerine halfling. They were rude but advised visitors go to citadel via goblin village and avoid the toxic ruins. At least locals had multi racial culture.

Kept looking till heard clanking in a cave. A red robot with a black blade covered in silver runes demanded souls. Party quarreled with it and attacked but clockwork man was smashed but robot was killed. It burst into flames. Forlina tried blade and sensed it was evil, tried to compel her to kill. A +2 evil sentient blade. Wrapped it up and repaired clockwork man. In robot lair found trash and a solar flashlight.

After looking about more heard dogs behind them. Familiar scouts reported horrible mutants with pack of hawk beaked dogs following them. Party got into ambush and killed them with a few scratches. Haldamir healed them easily.

Saw a falling silver dart from heaven fall into forest and went to investigate. Found a crashed shuttle but so did mongrel men who claimed it was theirs but party killed them all. Door opened and dying astronaut ancient came out and they saved him. Inside found spacefood sticks and a cryopod recently opened. Consoles were flashing and burning and they put out with fire extinguisher and decided place was gonna blow so fled.

Fled and waited for explosion that even scared away blue vultures circling party all day in ruins. Went to water to wash off contaminant and Haldamir purified party food and water. Used mounts to swim over river which awoke astronaut who was unhappy. Most thought he was babbling but some recognised as ancient Earth speech. Man was sure he was ill.

Found white goblin village surrounded by bone stockade. Copper wire lashed giant bones to make wall. Goblins were shy at first then realised party wanted rest and accommodation. Given a hut and gave the goblins dog corpses that Haldamir had cleansed of poison with a prayer. Goblins mixed the sour dog flesh with spicy river octopus to make a curry which was ok. Felt pretty safe but Ulysia sprinkled dust on doorway and curious goblin asked what he was doing. She told him was curse dust that killed evil thinkers who crossed it. Goblins really impressed so she did it too compound gates too.

During night the clockwork man, fully repaired alerted party to see astronaut in fever and suit splitting. They assumed was being altered by the planet psychon gods but actually was a werewolf who scratched Tsaren and Doc. They killed him and goblin shamen convinced party well and burned corpse. Rested longer and next morning hired a guide.

Guide was to take them to the citadel. He mentioned he would show them around the dead god. Piqued party interest so goblin explained. The god was a 1000 yard tall ancient war mecha laying in swamp. Tended to vapourise those who went near it. A cult was trying to get close but always failed - they were the robed men party first saw in ruins with incense. Some say adventurers had found the right pass keys and entered the god. Some returned with riches, got greedy and returned. Most never seen again.

So around the dead god fire zone and found the citadel.

Upper levels
Garden: Zoological park where beasts many lands are kept for educational purposes
Church: A cathedral with room for up to a thousand with many chambers, staff and artworks
Merchant: Shifty blackmarket with goods sold off back of carts, no questions asked
Middle housing: Huge towers with automated elevators, laundry services heating and lighting
Middle housing: Large courts with fine houses separated with gatehouses and gatekeepers who limit access
Stadium: Exhibition halls for craft competitions and trade shows
Merchant: Spacious clean post-industrial supermart with androids serving prepacked goods
University: Arcane school teaching secrets of science and sorcery
University: District with clusters of private schools and tutors
Church: A tiny shrine with idols, simple stone slab altar or artwork in a niche or small room

Inside goblin showed them around. Got strange enthusiastic looks from many, especially from martial artists. Saw drilling troops of all races with mixed and segregated units in formation. Saw the slum which party impressed full of artists. Locals dismissed art ghetto as lazy scumbags. Still it was happiest ghetto any had seen. Heard of catacombs beneath with undead and cisterns full of crawling things. Also apparently gardens for the rich. Taken to cramped goblin inn where innkeeper explained all visitors would be tested in arena sooner or later. So party went to arena with landlords grandson to slave district and signed up for a team death match. Called themselves Team Rainbow Unicorn and went home to rest and prepare. Told to leave pets and mounts behind. Next day after, landlord had spent lots of effort making bets for the party. Party had rules explained and entered. Only core players, Bigmouth the kobold and Twitch the goblin allowed. Enemy gates opened and seven homicidal human hating virused android workers with short swords came. Party used better teamwork and won. Party bets made them some cash so they were now able to be comfortable and were approved by city to stay.

Told of upper levels and offered a mid town apartment which they are thinking about. Tsaern the monk realized the martial art school here good to train. Doc wanted to go to black market for military pass card to sack dead god but told down town folk not allowed. Another reason to get an apartment in mid town.

Happy with new base, all keen to explore hex ruins, the local magic and warrior schools and other mysteries. Dead god was most interesting to all.

Was a fun session and all keen to repeat. Have set up a FB poll for players and I would enjoy running after vikings for a bit.

Thanks again for Zac and Olion and Dave for instigating the Psychon citadel generator
If I had Hex tables like this i could be lazier still.

http://www.random-generator.com/index.php?title=Psychon_Citadels
Next weekend will have Roadwar2000 BRP, Marvel and Vikings. Will do roadwar log when party do more worth writing about. Tuesday DnD gang holding in by tooth and nail for viability. I was too sick for two parties this weekend but living above game club has benefits.
Posted by Konsumterra at Monday, June 09, 2014