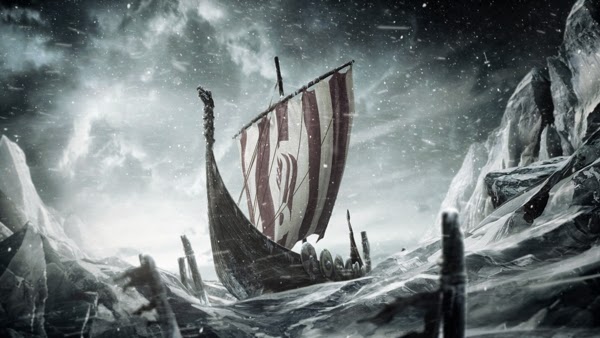 So party crossed to the viking dreamlands into the nine worlds to Jotunheim. After several hours all made it through with Loon which was a surprise as he said he would stay on Ithaqua's frozen planet.

Marched into blizard and used sun stone and navigation kit to head south. If Jounhiem was north of home then south was a pretty good start. Some heard insane distant gibbering laughter and then all felt the ground shake. A 23m tall frost giant in mammoth pelt clothes, a club and a sack of cows came. Thlorhadr was hit by a thrown cow and blocked it as it flew past him. Thanks to shield and armour he survived but shield arm wounded. Byzantine style arm armour saved a few of the guys. So the vikings charged while some held back with thrown spears and axes and shooting arrows. As were closer supernatural cold sucked the life from them. The giant failed to hit mortals who gorily chewed into his legs with axes. Alrec took one of his famous leaps and struck it's head. Giant fell, then his club arm was hacked till he dropped the club. All other vikings hacked up the giant. In has sack were many damaged cows. Vikings turned corpse into a tent then slit him open to released blood. Cooked cows with fire and storm eventually over using giant corps as tent.

Giant yapping dogs awoke party who crawled out of giant to see 8 more giants but several in fine kingly clothes and attractive like the richest courts of Sweden and Norway.  Other four in thrall dress. Spoke to the giants who offered hospitality. Carried party in sacks. Alrec got carried by young noble girl like a doll and he cooed sweetly like a baby for her. Yvette got to sit on a giants shoulder as the giants all thought the huge beauty very attractive (STR and SIZ 19).

Taken to kitchen and introduced to giants servants and pets. Loon sneaked into rat hole and found huge rat dung. Taken to court for feast where party and their adorable weapons were to be guests for dinner. Thorhadr used his holy song that obligated all who hear to not harm each other for 24 hours. So the vikings came to live among giants for a bit with the scald singing the hospitality song each night.

Alrec spent time in dolls house eating cake and drinking mead as giant girls waited in him and a stuffed polar bear and some dolls. Others spent time with scholars reading about magic (to be fair Alrec has now learn enough magic to ruin the world with his Necronomicon). Studied Ragnorak, the final war and how giants hope to invade Midgard shortly and expected  vikings would help and serve them.

Yvette put on dancing shows and collected pounds of huge silver coins. Loon with Thorhadr robbed the giants treasury of gold and silver. Thorhadr backed down as was too risky. Loon stole their relics evoking Loki to aid his theft. Alrec out in garden with the giant girls found graves of other tiny people. Alrec came by at night and opened grave of great hero taking a nice sword.

Days past and the song of hospitality every night renewed the bond between them until one night a letch old giant. Alrec starting to claim his Necronomicon dread magic was superior to native Norse magic. One night Throa and Breidr were looking in garden after seeing Alrec wave about the mighty nameless sword he stole. Meanwhile Alrec was in his "manor" when older boys took of roof and tried to drown him in boiling porridge. He ran off with his booty bag and heard Yvette with her husband and bear and bag of giant coins fleeing the seedy old giant. Other vikings heard noise too and Loon started using his rat maze to skulk about house. As giant got to bottom of stairs to grab Yvette, she with her bear and husband struck the giant. Meanwhile Alrec and Hrafn appeared from behind striking the old giant mans hamstrings. Viking heard noise outside and found a undead Draugr had wounded Briedr and Thora badly. They here both laying on ground. Vikings slaughtered dead while he was moaning about his stolen sword.

They fled south and eventually passed mammoth troll beasts they heard of years ago. Past ice to wasteland beach with a few meters of seaweed mounds around shore, then tonnes of logs and driftwood. Set to work studying giant relics and lore by night and building a raft by day. Killed many sea birds. Found giant cauldron (cup) filled with beer every day so there was good cheer. Tried giant horn and saw coast patrolled by huge angry scarred toothed whale. Thora had brought a giant puppy. It tried to escape but Yvette tied it to her polar bear.

Eventualy went to sea and throa used dream skill and spells to take them home beyond the veil of sleep. Also to bring their bodies through the freamlands from the distant moon of Hyperborea. Found shore of Greenland and went to stay with scraelings rather than oathbreakers trying to build a new home in Vinland. After days with native friends one of their own trade vessels saved them and took them to Iceland. Back home as the anguished only three months left and how their lucky ship was stranded in another world.

Thorhadr came up with a plan. The golden scepter of Irem they took from dread Arabian ruins could open time gates. So in cave behind farm in Norway they went back two years. Hiked to other port and went to Rus to hide out training and preparing for the assault on the city of Cthulhu. Throa was keen to have some more children before end of the word and finaly a son. Thora was healed by Freya cult and became pregnant too. Thora thought she could find her husband in Novgorod and have fair with him while he was in on trade missions in Rus years ago (she was infertile for over six years and she was now cured). More time travel next session.....