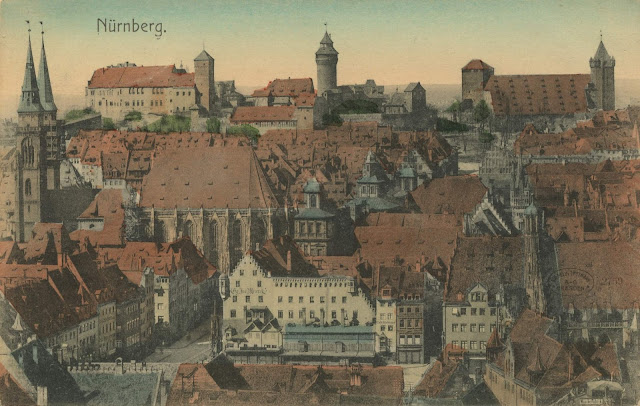 This filler game has life of its own. When i got cthulhu dark ages i thought i knew the era and fell badly, even though i am a seasoned historical gamer. Having done archeology, philosophy, classical mythology and literature and i have a particular sense of historical realism. So when i was interested to play again i found my darklands pc game manual, online player guide printouts and pile of historical city maps i printed. I realized i knew better this time and this pc game had lots of great data 90% cthulhu compatible. Ill do character sheet soon.

One interesting thing about basically historical/mythic setting so much great history. Images of historical christian art to intemperate via necronomicon and maps and views of cities. Best of all i read history and i learn real world data. I feel i waste my life reading too many fantasy world histories and novels. Herodotus my favorite gamer guide - plots, weird customs, crazy stories.

Im going to do my best to not name any mythos beings using christian terms as often as possible.

The other side of the coin is Moorcock where world exists just to reflect heroes psychological states. My planet Psychon does this kinda too.

Last game featured:
a scholar student studying masters forbidden secrets
a wood warden and forest guide, masters gardener in city
a bloodthirsty mercenary who dreams of being a robber Knight.

They went into hills west of home city to find signs of old ruins or pre-biblical rubbish. Found haunted overgrown village and smashed alchemist lab in basement only a hundred years abandoned. Heard of degenerate cannibal tribe in mountain caves. Church had image of Charlemagne era saint battling walking snake demon in front of cave. Heroes went up valley and met local gang by faking they were scouts of a better gang looking for recruits. Afraid of caves but some joined. Entered caves and killed two dozen inbred degenerates. Found sanctum with basalt door the scholar opened. A throbbing humming stone tower with serpent man - snakes from before the fall who could still walk. Found pile of their crap and broken devil wands of crystal. Opened the crypts to find some skeletons and activated cycle to awaken all. Savage battle of man vs devil snakes with death wands. Managed to catch a snakeman, nab several wands, a pulsing organ and a few skeletons.

Master is a bit odd but claims this forbidden knowledge has good uses. Serpent man recovering from chopped off hand (he was holding a wand) but talking a little bit. Scholar has telepathy medallion (with wooden cross to cover alien relic) and was playing with squishy organ when it entered his body.

New Adventures
Woodsman and the merc went looking for witches with real occult knowledge. Found old lady with dog in ruined cottage that the merc somehow got to like him. She pointed to an isolated village that has bee quiet.

Pair walk into tiny woodland village and went to priest. He welcomed them and offered communion before mass and possibility of housing for night in headman animal shelter. The woodsman confessed all the killing he did and priest said ok was your duty to god and master. Mentioned masturbation and fined and told to say 60 hail Mary's. Merc went in and moaned bout all war and murder and his desire to be a robber knight. Priest said fine was in just war for godly cause. Mentioned drinking to excess and was scolded for waste, gluttony and pride. Priest blessed in name of Saint Simon Magus and sent to headman while congregation gathered.

Fed humble meal in evening and drugged. Dragged up hill by mob with torches. Each held by four brawny men. Atop hill priest prepared stone altar with knife, bowl and blood. Both christian men struggled and could not break free. Until demon apeared. While most cultists screamed and paralyzed, heroes broke free and fled. Heard roars and screams all way to village. Killed a boy and old man while they grabbed their property and ran all night. Got home terrified and exhausted. Rested and drank and ate sausage and sauerkraut for days.

Master sent lads back to kidnap priest. Joined by Scotsman from last pict clan leaving home as his race vanish forever. Is a pagan witch. Uses a pole axe, has tattoos all over.

Old lady was friendly mentioned villages looking for them a few days back. Party skulked to hilltop cult site and found alchemy symbol carved box of five potions and cult dagger. Some blood about. Watched village till lights out. Pict and woodsman grabbed the snoring drunk priest from church while mercenary crept into village to release burning oil soaked squirrels in barn. Fire started and man coming from house. Bam! Merc shattered mans chest in with heavy mace stepped in threw oil on stove partly setting alight mans wife. Came out and found headman and son trying to put out fire. Threw oil on him and struck son dead with pulped skull.

Party fled back to town with village burning and priest bound and gagged.

Priest grilled by party in basement for days. At first defiant but broke when he saw they knew his thoughts. He begged for death and not to be given to witch hunters. Got him to talk of village conversion from man Albrecht who got the village worshiping black devil who came as man and fornicated with the villages. Massive plan to have rituals held all over Germany every lunar month and solstice. Priest not especial knew more than that. Wrote his call demon spell in Latin for them.
Disappointing to find priest birthmark was just that.  Kept in cell next to lizard man. Party visited alchemist and identified potions.

The party decide to investigate knockermania down south. Kobolds closing mines of south and crippling economy and arm providers of region. Party set of in wagon of turnips to help mining village near Nurnburg. On way saw cardinal coming and guards coming in palanquin and pulled over to let him pass. Prepared by woodsmans tale of aggressive tithing whole party frumped selves up and presented selves as worker bringing food aid to miners. Did such a good job Cardinal gave them two coins. Everyone impressed by this.

A knight challenged scholar but he convinced knight he was unworthy. Did tell him to look out for satanic Albrecht though.

In Nurnburg party settled in and proceeded to research knockers. Woodsman went to brothel to find biggest boobed prostitute in city. Turned out she knew little. Pict instead chose madame who liked his foreign charms and mentioned to him how could so many cities have mine problems same time? Merc went to miners bars and shouted food and drink and spent 2 days talking with miners. Scholar had wanted posters printed for Albrecht and went to town hall collection of deformities and freaks. Saw lotsa odd stuff. Mermaids, cyclops kittens, two headed calf and a kobold, just like eye witness. Bribed and wined to see secret collection with non fake mermaid, fish baby, goat man and paintings of alchemists. Library researched knockers/kobolds/dwaves.

Went to mining village and made several fumbled communication rolls on leader who became negative, skeptical and gloomy. But all did well persuading mob of angry miners to welcome party. Headman tried to calm crowd but they lynched him, drove him out of town and gave house to party to use.