Rum, Bloggery and the Lash 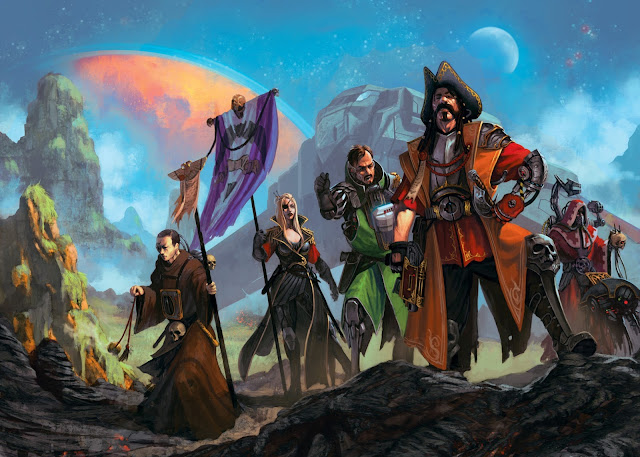 So Ive been living above a game club about 8 weeks and sometimes go to sleep with cries of happy gamers under my floorboards. Have been playing lots of different things and mixing with local scene and have been trying other editions of DnD from interest.

Fate seems popular but a bit too poetic for me. Warhammer 1st ed has 3 games all based on pirate ships with overlaps and great hilarity. Shipborne adventure makes drop in drop out play work well. I cant believe I lost my book only a few weeks before moving.  I have 2 characters in his on and off.

Playing a kinda 70s Delta Green horror set in 1979. I am playing a ex MI5 Bodyguard and a bit of a prejudiced thug. Proving to be fun.

Have been playing and watching pathfinder games, dnd 3.5 and 4th. Id say game master style biggest factor over edition but My own game seems to have lots of weird stuff happen faster and more fights per session. Players spending more game time arguing and bitching about editions is funny.

Been playing with club figures and terrain a bit which is nice. Sometimes the figs carry the imagination somewhere different to the all imaginary battlefield but it has it's uses. Im being tempted by people playing 1st ed 40k game at moment, i can use club figures and point build anything weird. Was a beerhammer tournament of late may become a monthly event. Objectives are cocktails or cans of grog.

My Cthulhu 1490 going well and funny to have a new priest player join party to realize party not that different to the great witch cult stalking Germany. One player has taken over a gang of robbers in the forest. They kept a Serpent man alive in cell and now he is a trusted adviser, teaching them sorcery, justifying party atrocities with the bible and other kindly help. They even allowed him to eat a cultist priest and now he can adopt that mans form. Posted wanted posters of cult leader about Germany via Fugger bankers and have received cultist attacks and wanted posters being destroyed in Frankfort.

Party quite vicious wanted to burn down a townsmens family home in case the whole clan in of cult (odds were the clan just crooks). Louts were paying urchins to remove wanted posters. New priest advised them to be merciful. Went to country town and infiltrated festivities for sabbath. Attacked cult leaders only to find whole thing a plan by cult to kill party. A great horned huntsman from the woods came for them with his demon dogs and the party mercenaries mostly fled, ruining the heart of the party controlled gang. A scholar summoned an invisible "Angel" from the sky and more madness broke out when star vampire and demon battled each other to the death. A horrible san blasting massacre.

Will get a pc sheet up here next few days and my planet psychon starting pregen characters. Im proofing these now on my FB account.

As winter ends, my health improves and i start my more profitable art practice again I will have to slow down on all this gaming a bit. For a post moving house activity and being a temporarily a skinflint, nights a week of gaming and new friends has been good and cheap entertainment.

I still get weird reactions to my preference for old games, often people critiquing them without playing them or knowing the difference. Laugh at being able to die in a game which is numerically possible yet possible to avoid also which they dont get. Play testing Planet Psychon tournament Tuesday as break from exile island dnd game (freaky coincidence my game name became club name.

Hope to play Psychon, RQ (a new older member is an RQ fan), Marvel and some kind of SF either my DnD one or BRP based one depends on time frame and seriousness. Club obtaining a mound of heroclix for tabletop heroes in TSR Marvel game i want to run which will bring in the wargamers, board gamers into my super hero universe.

Getting to hang some art in club and paint murals also. Another game club asked me to do some art and another a logo.

Its been good to be a player but i tend to play simple combat characters who will kill anyone in the name of goodness by any means possible. I have been making an effort to not be too clever in role playing my exponents of brute force.

Blogging has been a great way to record my ideas rather than loose them. I can doodle some notes on bus to work then type them at night. Will get into scanning some older works sometime too to appear here. I have about 60 litres of old notebooks but blogger has been more focused writing and made my own work accessible to me. Been a good thing to do while bedridden and unable to work. Inspiring peers and comments from people using this stuff i dream up. So thanks for reading and writing and commenting out there.
Posted by Konsumterra at Friday, August 30, 2013