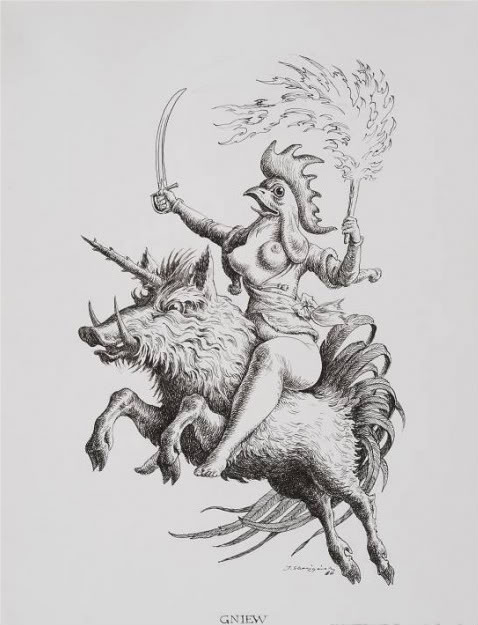 In process of writing:
d1000 curses stuck on no 850
Gnome race=class BX class
Adding a few things to Psychon Book
and writing Psychon adventure for Sydcon

Been well, still unpacking room got a door and new wall today. Saw about 300 bux of stuff i want in game shop - cthulhu britain stuff, new orleans book, chaosium magic world and iceland books, more dice.... Also about a hundred bucks of posca pens in new sizes for more recent colours. Have urge for a tablet and buy tons of cheap old heroclix minis to play TSR Marvel at club. Getting interested in BRP games again too. Been asked to do some board game graphics.

Playing:
2 on off pirate games in warhammer fantasy (80s version)
DnD 3.5 and 4 games just to try before i knock em
My cthulhu 1490 game where party grilling a serpent man prisoner and starting to trust him to help them fight witches (how sweet)
A few boardgames

and my DnD EMO rules game now 10th level and just finished this:

The Lost Caverns of Tsojcanth
Party looking for last few rooms. Found Chasm Fly Demons and drove them to teleport away. They Joined up with black furred ape darkness demons and summoned more kin to join them. Bloodkock the Druid having tasted en escaped demons blood coud track it and part hunted the hideous demons. Found wall of darkness with wounded elf maid and child. Emy cast Ice Storm on dark zone and bloodknocktried to dispel darkness. Cancelled one of a dozen darkness zones wasting his action but revealed one fly demon. Bard used song to block fly demons sleep inducing drone. Then invisible shadow ape demons appeared attacking the party and wounding man. Thirteen demons all up, for quite a battle. The bard tried to hover back with his new bat wing cape but demons telekinesed him down then a demon skewered him on his blood sucking proboscis and tried grabbing the bards lute. Another demon stabbed him from behind and they carried him into air. Ground demons killed and party slew fly demons and dropped Linden the Bard to ground with thud. Part pet bears tried and failed to catch him.

Found a blanket of smothering almost killed Bard with a trapper from ceiling dropping on top. Party killed, destroyed rug and gave mouth to mouth to bard saving him. Went through gate and killed minotaurs and bard befriended a minotaurs riding bull to use as a pack beast. Went to next pocke dimension and faced centaurs which they charmed and influenced before leaving. Killed animated skeletons and rested in doorless chamber. Went to next plane of infinite colums and trapped in pentacle before escaping with new centaur chums. Found a cave lizard who
Linden charmed with help from the reptilian speech crown. He wants as new mount.

Finally into the Vampire Chamber where party resisted and killed her but Emy was knocked out and level drained. She also picked up inteligent evil balde which controlled her so party ok with her being knocked out. Used bears to open slab and killed vamp again before she went deeper into stone floor. Druid shrink, squeezed inside and turned into bear o help open from inside. Party found coffin and books and finished the vamp off one and for all. Took the great artifact lamp and returned to Gnome village where Druid was married to his gnome betrothed.

Over 300 000gp loot plus many spells, magic cage, evil sword, artifact and new followers. Many stat booster books and level up meant players added 3 stst points as went to 10th. Emy INT is now 21. Wondering If artifact more trouble than its worth.

Barron believes the Gem fueled lamp is a waste of money and trouble.

Many Demon lords Enemies of Lantern and Iggliwiv's magic Including the Vampires Dad who the Lady wizard imprisoned and bound till he escaped by deception and carried her to the Abyss. Whole new scale of enemies opened up. Will get party set up new bases and establish mountain kingdom. Also plan to visit the Bloodsand whaling town and giants under dark after that.

Plenty of old enemies of party to trouble their new kingdom like fish cult, the White Sorceress, a Lich, Dark Elves and others.