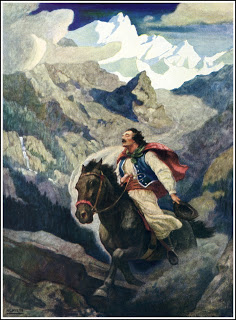 The heroes began systemically killing 3-4 rooms then returning to a zone of goodness where Humblezorg's evil cat (now openly talks to him in private offering evil advice) and girlfriend Clarissa could not enter.

With battle bears and Dwarf in front and spell casters and Bard in rear. Bloodknock the Druid and his reincarnated Gnome body guard in the middle. Humblezorg scanned every room for evil, law and magic. Most cases sensed something and fireballed. Often party won still with summoned flunkies like snakes, cave eels and a fire elemental. Bloodknock kept forgetting to collect 9hd worth of blood to summon a blood elemental, but anyone could forget to drain litres of blood of monsters into cauldron.

Monsters butchered:
dracolisk which stoned a bear and injured several with acid before being killed butchered
spells still running ignored loot and came into cave with giant and pet giant rhino beetle giant killed and druid calmed beetle and left to recover and eat fungi

roper lair - i had forgotten they were super smart and made sophisticated comparison of party flavours as the tentacled party. Kinda creepy turd octopi old ones that boasted superior intellect while eating you mere cattle persons.

troglodyte horde, bard entangled then charmed with song to kill each other, lots of party got entangled too but got troglodyte eggs and strange "nuetral" sword

a behir actually took out gnome before being killed and skinned

70% of dungeon clear and found core of complex bur teleported away three times. Scored huge amount of loot. Will easily clear 10 000 each, items for all and henchmen. Some henchmen need own 1pg sheet now.

Bard wants a bard school brewery pub on an island. I was a bit dismissive but now think i was a bit mean so will support this scheme. Whole school of bards telling party story fancy that. Attract richest visitors and best bards only and paying students. Start intelligence network with students.

Sorcerer wants a pleasure-dome cult school where he finds cities talented sorcerers orphans and claims to have taught them to attract mooks to his cult. Still out to blow stuff up for thrills and power trips on looting sprees. Was not interested in talented humanoid kids he could find easily. Thinking of recruiting bumpkin sheriff Gary back now enhanced Charisma stat. Gary a bit like onion knight. "I beg you sir dont listen to that cat and woman".

Bloodknock  the druid wants monoliths for bloodletting. Will be trying to retire wolf to the priestess of Bogripe village and get bug as follower. He wants to explore underland and undersealand and bring them into coming war as a sacrifice to the wilderness. Wants to breed monsters. He would prefer a +3 blade to all the crap of his share.

Emy's player missed sessions studying 1800s lit for uni. Will be able to build own tower of birds on island and save her sect. Also will  add her gloom to school forever. Most saintly necromancer ever. Sorta a spiritualist do gooder from 1900. Has cast made reverse animate dead spell to destroy undead as if turning. Emys apprentice growing to usable on adventure level too but mostly left to file books and guard loot in dwarf dungeon vault. New students soon when tower built. Hatching 2 cockatrice eggs. (I must read book: the Dun Cow)

Another option is party take over the mountains as a hidden kingdom for whole party. Would lead into anti giant adventures well too. Party could build location of choice to get more free followers and together set up a mountain valley village. Know good homeless rebels living in caves who need homes. Friendly with gnomes, elves, dwarves. Only a few giants tribes and a wyverns and stray monsters left and those damn dirty giant hairy mountain snakes.

"You'll wish I had a fireball pretty fast round here" warned humblezorg.

Druid and bard for long term stealth and melee sorties magically hothouse pet bears before fight (barkskin, animal growth). Have brought bears back to life with raise dead animal spell. Both summoning giant cave eels in battle often handy extra fighters, probably five were killed sparing party lots of damage. One bear took about half of all parties damage due to luck, was briefly turned to stone. Bears once awesome about as good as 7th level warrior. But two and party dont fit on a floating disc spell.

On good day with wimps sorcerer still uses sleep spell and bard fascinate or glamour with song and entangle is a menace. Enemy turns on own kind, bottleneck wimps and kills their chance too overwhelm.

Wizard Emy with lightning and necromancy and with school necromancer chum Hel are both fliers too so four flying spell slingers scary. She also uses multiple summoned blood finch swarms to gnaw down opponents. A few floating discs and they can airlift party about.

Monster Lore
Party know some bizarre languages now and can often extrapolate ideas about a species by related languages. Stomp into monsters rooms. Usually detect chaos, evil and magic and sometimes for life with spells, powers and skills. Party based on area smell and what they sense start demanding in lizard man/chaos/dragon stuff like "ok come out! We are the new dungeon lords hand over your treasure and things will go easy for you we might even let you stay".

Not one monster taken up offer, all murdered in 3-7 rounds.

Vampire and artifact next session.
Posted by Konsumterra at Tuesday, August 13, 2013