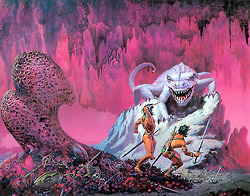 A few words on magic on psychon and a few unique magic goodies as I have neglected the role of magic.

Magic is part of the greatest technology that granted the wishes of the ancients and led to the final end. Some ancients were destroyed by their own magic others were changed into humanoids or undead or monsters.

Priests, Druids and the Gods Divine Magic
The great gods have powers over the matter of Psychon, can disintegrate anyone and upload the persons data and reincarnate them again in a new body. Most powers of priests come directly from these gods. Rituals and prayers are channeled through a implant and realized by gods or their minions.

Wizards, Sorcerers and Arcane Magic
These magicians tap into the "magical" infrastructure of sub space and call down powerful effects without the gods. Wizards learn magical codes which program reality when specialty sounded words are chanted. Sorcerers instead learn theirs through dreams and visions but lack the understanding of what they can do. Often otherworld beings like demons will guide a sorcerer as the process is less difficult than maintaining a priesthood.

Psionics and Mentalist Magic
A mental network surrounds planet Psychon also known as the psychosphere. Most life has psion nanoids and interact with these fields which may tap into minds, bodies, matter or other planes. Spirits and phantom intelligences roam this invisible world but gods may keep their chosen in a custom paradise or imprison in a underworld. Shamen and exorcists and spiritualists all dabble in this world too.

Magic Items
Rather than being technological such items are attuned to divine, arcane or psionics. While some objects may seem ordinary or made of strange exotic materials they actually have a magical energy matrix which taps into one of the three magical power types. Many Items of seemingly strange nature exist. Artifacts are particularly powerful the products of gods or greatest magicians ever. Feel free to take magic items from other game books, novels or mythology. Many petty and minor objects are used like technology by people every day and are indistinguishable from technology to most people.

Other Planes
Other planes are either non material data constructs where a person is downloaded to or a pocket dimension such as overspace or sub space or hyperspace. The first type tend to be populated by beings who cluster in groups according to alignment who collect souls as playthings, souls, cattle or followers. Some planes are created from the leaked dreams from the psychosphere forming a dream land or realms of nightmares. The latter type are usually ancient bases or holy store houses of the gods where they keep parts of their bodies and goods they may teleport to Psychon when needed. To travel to a data based plane a person goes into a coma, dies, or is disintergrated by a god to be integrated later. Physichal pocket universes can be entered with your own body and goods but such worlds are hidden from man by the gods. Other plane beings can with effort manifest a body on Psychon but take some effort even years to prepare a new form so they do not relish their material body being destroyed.

Monsters
Many creatures and bioengineered horrors from the apocalypse are familiar as monsters. Beast me come from attempts to replace diminished humans with a servitor race but most are free now and resentful. Some creatures are as mentioned from other planes. Mutants are effected by ancient nanoid mutagens, wild free roaming replacement organs, and attempts to hack populations biology to create allied troops from enemy populations. Undead and lycanthropes are affected by specific strains of nanoid some say undead are even alien constructs of varied strains. Artificial beings like androids, robots, cyborgs, AI's replicants, clones are common in ancient bunkers and even in wilderness areas or the massive ruined subworld remains of buried cities.

Some monster constructs are magical and defy logic yet are animated materials that draw magic power through enchantment matrices made by magicians. Golems are the best example. While enchanted the matrices of power glow within and tap into the magic of Psychon, the very blood of the gods power and manipulate the matter and energy in the golem. When killed some remnants of this may remain in the fragments of the golem body but a object with a broken and deleted matrix is cut off from the power of overspace unless it is enchanted afresh.

Dungeon Magic
Unleashing the divine poewer of the planet and the secrets of the ancients attracts attention and the gaze of the gods or other beings. Left over mana from magic fields may acumulate and feed magic creatures or have local effects or even evolve into a local consciousness. A high magic dungeon might become self aware.

Many strange items of magic can be found in dungeons but some powers can cut magical energy sources while a item of pure science would work in another galaxy cut off from Psychon. Other forces can block technology but a anti magic field is not going to stop a laser gun. A magic missile may strike someone in advanced power armour or leather as easily. Cunning gods and wizards use science and magic effects to guard treasure just to make life harder.

Psychonian science bunkers and magic dungeons are around but the combination of both is a common hazzard also.  Possibly enchated revolvers and lasers could exist too and a sentient machine might tap the power of magic from the mana-sphere easier than a mortal. The Death Machines of the apocalypse have become demons and devils that could kill some gods. They are now covered in diabolic power runes, magical self repair glyphs, indestructibility wards and powers beyond their human makers dreamed. Undead and other beings have blurred the differences between both worlds too.

Then new Psychon PDF
Posted by Konsumterra at Tuesday, August 27, 2013