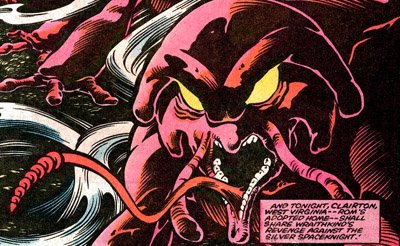 Based on old notes recovered from 3.5 floppies - so pardon formatting and some other issues - i just thought safer here than on Amiga format discs from 80s

My versions of dire wraiths a awesome marvel monster race worked well as enemy for a alien player in game and i could go to 70+ issues of comic for stories. 2 volumes of Rom comics with annuals and team ups for final war would be way cool.

Banks was in start of game agent who watched party and could impress heroes for long time before they discovered his secret. Way before Lynch in Image too - all spawned by player wanting a highlanderesque pagan vampire hunting archer. Immortals made a great player type in game.

Wrekkas were my sentinals but based also on some other robots especially in dr who comic. Started out clunky insane and almost comical kept getting better and better.

Notes: Dire Wraiths are sinister aliens who can adopt the form of any being whom they devour the brain of with a tounge attack and a Consume Likeness feat. With a Consume Likeness stunt they can develop a permanent form which can be adopted at will. Usually each wraith has a human ID and a monster form from some biological experiment. Darkwings, a common example are shadowy peradactl like demons which belch flame to attack. Many monsters have unusual abilities. Wraiths use their powers and alien science to create monsters, infiltrate the Earths institutions and create disasters.
Varient: Wraithwalocks are reproductive males who also have a powers but are too rare and valuable to appear on the battlefeild. Non-repoductive male or Peons, have no specialty power. Peons also have mostly Good stats and powers but some exceptional example have one or more excellent stats. Most Peons are less talented also. They act as servants to other wraiths and adopt undercover assignments in low threat missions. Of late they have been using more and more human technology. This trend has appalled the Hivequeen council and it is heretical for peons to love their human ways too much.

Notes: Banks was hired in the nineteen eighties as a consultant from MI6 Meta-Operatrions division. He personally developed many training programs to combat superhumans. He has administered a number of superteams including Taskforce UK, The Southern Knights and the Southern All-Star Squad. He has officially scored an impressive 14 confirmed metahuman kills. He disapproves of metahumans who misuse their powers or harm normals. Presently he heads his own firm of Metahuman Security Consultants for meta prison Project Safeguard.Most have no idea he is immortal.

Mark IV These were built in the last days of Wrekka USA as prototypes and have only recently seen again. They seized control of the USA for it’s own good and shocked the world. Their Energy weapons are still highly sophisticated and seldom understood. Only Meta science can produce them. Arms include: Mn aerospace engines and wings, Multispectrum energy blaster, Energy Web, Plasma Blade, Forcesheild reinforced armour, Energy Harpoon, PowerScrambler, Power Inhibitor Cuffs

Mark V One of these was built by completely unknown means in 1996, for a time it was the supreme Wrekka before it evolved it’s own self identity and disappeared. Australian Sentinel claims he last saw the mighty weapon in disguise working as a janitor in Chicago. Orion was apparently built from the molecular leval and is theoretically near indestructible. Arms include Antigravitic flight, ForceFeild, Shapeshift, Disintergrator, Tractor/Repulsor beam, Power Inhibiter Feild, Psi Jammer Feild, Immortality, Cyberempathy, Telport, Powerscan, Aurasense, Reflection, Energy Absorption,

Notes: All have body armour = to their Endurance and self destruct at Endurance +2cs. Psyche represents electronic countermeasures vs insanity and control. Fumbles on a reason roll means the robot makes a serious error and deviates from normal programing. A Psyche feat determins how severe this is. Mark IV and V actualy can be detected as psychic entities but their psuedo organics are difficult to influence. Customized Androids and more humanoid beings may have simular stats but fewer powers. Memory metal/plastic androids, psuedobiological, artificial intellect, human appearing synthetic and biological coated exoframes, technoorganic nanomachine colonies, molecular arranged circuits, are just a few varieties

Powers
Amazing Plasticity
-Extra Limbs, 1 area range +1cs multi att (Pseudopods)
-Incredible Bounce
-Incredible Enhance Armour +6pts
-Incredible Clinging
Incredible Body Armour (includes Mass/Density/Size)
-Remarkable Trap Missile (capture object unharmed)
-Remarkable Flexshot (can fire an object trapped in flab)
Good Meldsuit
-Self-Revival
Notes: (+1Cs to hit, 10 tons weight, 2 stories Tall) Formerly a teacher then nurse during AWWI. Has worked with many powers as a tamer of troublesome Metahumans. At some point (or perhaps always) she became an agent of Ironking. Since then she has operated several indoctrination camps and even one inside the The Tunguska Organism which Iron King once commanded and which was probably a large swarm fragment. She has been one of the most hated villainesses alive and has been rumoured to have had many children. The bodies of her black and blue bruised lovers have been found across the world.

Notes: The Circus of assasins varies in it’s membership but consists of an ancient order who pretend to be common entertainers while practicing some of the most amazing physichal and mental disciplines on earth. They kidnap infants and raise them in their special skills immediately. The Cult goes back the the arena’s of ancient Rome and goes to the carny folk across the world. Once hired killers, today they serve Iron King as trainers for his assassins. Possibly he seized control of them from a hidden immortal leader. Fat Lady has also been known to consort with them for cross training with her own students. The assassins most recently kidnapped the Australian Hero Rubber Jonny.

Notes: This species of 9m long insectoids rapidly became a menace once on Earth. Once established they build nests and then lay eggs inside uneaten humans. They also captured metas, encasing them in cacoons for some unknown purpose. They attack at night, burrowing through floors and stealing the occupants. Larger versions have been rumoured with +1cs all stats and powers..

Notes: This species arrived on Earth secretly and apeared during the invasion peak to attack key outposts of human resistance to the invasion. They are lumpy green humanoids with a crablike claw on one arm and a biological weapon on the other. They communicate via whale like squarks and squeals. A pod of homunculus are usually armed as per their mission or possible opponent, but mostly bolt-throwers.
Starspawn Swarm Monster Notes: Swarm monsters descended during the culmination of the Metawars, When the worlds metahumanoids assaulted Iron King. They mistook IK forthe source of alien and metanormal activity. When the swarm came to avenge IK, a mere sub organism of the Nemesis Planetoid, all realized that the Earth had long been locked in a cosmic struggle between macrocosmic structural metagenetic beings. Swarmlings occasionally form the metagenetic cloud belt surrounding the Earth. Swarmlings decend in re-entry cacoons then seek a lair (underground if possible), then food (humanoids), then metagenetic samples (metahumanoids) and finally reproduction. All follow a hive organization and build elaborate tunnels reinforced by organic concrete made by their saliva and dirt. Sometimes both species live together. Some weird things have been found in these hives such as edible moulds, luminous fungi, human luring fungal blooms (Ex scent based mindcontrol), tiny parasitic beetles and more.