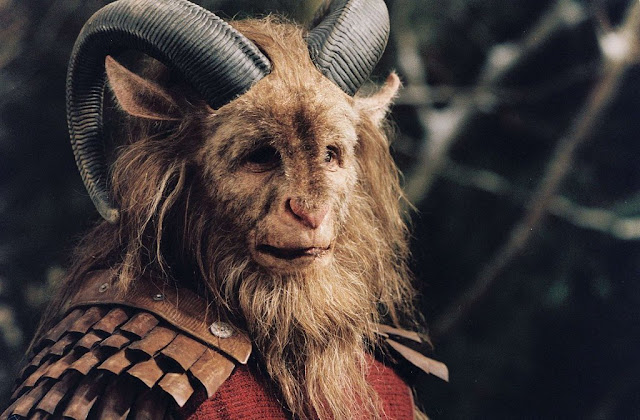 One of the things I liked in Narnia was the armies of mixed fantasy creature armies who kinda lived in similar areas. Id like my extreme wilderness areas to be more like this. That humans are intruding on ancient beings with aeon old pacts and customs. Strangers don't know the taboo places where man must not dwell. Or the lair of that spore dragon. The local freakshow of sentient beings trust each other more than they do humans, especially civilized humans, the worst of all. That wiegt, dryad, ghoul, ogre and minotaur know civilization will kill them all without a trace becase it happened where ever civilization left. These cultures are more like the timeless dawn age before man was born or chaos broke the world forever.

More and more in my settings beastmen, forest spirits, kindly hedge trolls, hedgehog men, wild forest savages hairy all over. Faerie folk (weirdo magic spirit people) and sylvan folk (more greek/middle eastern myth) elf maidens, dryads and other petty divinities are common enough you might see a few a year if you travel. Farmers would know several local non human beings and possibly have spoken to one. People leave out offerings for them. Dwarves, trolls, goblins even undead might be lived near and respected. Some fronties might be more violent and strangers from the heartland might not care about local traditions and alliances.

Bat basically the frontier could be less about fighting human barbarians, or orcs or demi humans (but that can all happen too) but their are many other types of beings in a true wilderness and humans are rare in such places or even thralls of non humans. Beastmen the huge warrior ones, the minotaurs and even the small mostly nice ones (lots like halflings) and talking animals are more common (1in10 or 1in6 or 1in4). Many of these older orders will unite into irregular hordes of demihumans, animals, giants, dwarves and whatevers will arise to fight civilization. Even races who hate each other will unite to keep out armies of man and many wild men and barbarians and country folk will join them. Many have fled into the wilderness to live with the old races than the yoke of civilization.

The first table is for a more typical frontier folk in a wold where humans are dominant but there are wilderness areas where even savage men won't got where non humans rule. The second table is more strange factions of creatures that I'm suggesting could be more common and alien and scary to deal with and not just evil. The have good reasons to keep humans hedged in manland.

d12 Standard Frontier Peoples, kin of Man
1 Barbarians, rougher tribal peoples often settling and invading civilization with own savage gods
2 Nomads, clans who long ago fled civilisation and have no love for it, worship beasts and anscestors
3 Wild men, clothless savages who worship beasts and trees and shun civilization
4 Dwarf clan, often with a well built and fortified settlement or dungeon
5 Elves, various tribes some civilized some savage or both, often have hidden settlements*
6 Halflings, most common and sociable of the small folk in secluded or hidden villages
7 Gnomes, crafty magical men, old and wise spirits of the land, live in hidden villages
8 Goblinoids including hobgoblins and bugbears and some other breeds live in dark  hidden villages*
9 Orcs of various races and strength live in fortified camps and villages for raiding
10 Beastmen of various sizes live in hill fort villages and often live alot like barbarians*
11 Trolls there were many troll races some ancient and wise and magic others common and small*
12 Giants including ogres, cyclops, titans and various tribes live in caves or crude forts
*smaller forms of these races can be made by reskinning a halfling and are 2in6 of the population

d12 Petty Divinities and monsters
1 Tree folk from giant ones to some more like people including changeling spirit tree folk
2 Water spirits and divinities including merfolk, elementals, nyads, lake serpents
3 Sylvan divinities including dryads, hags, faeries, satyrs, centaurs, fauns and many others
4 Faerie folk in all their variety with possibly with goblin and human slaves and pets
5 Beast spirit folk are changelings who shift from man form to beast form and inbetween
6 Hybrid magical beings like sphinxes and chimera are minor divinities and highly territorial
7 Reptile folk often hidden for aeons with various races and pet reptiles and dinosaurs
8 Dragons and many related species and reptilians, kobolds and draconians
9 Great Beasts are intelligent often magic animals, they consider beast folk their kin not man
10 Sea horrors are a great undersea horde of elder evil who occasionally colonise fresh water too
11 Abominations are monsters and hybrids and mutants shunned by all, bitter venom of the gods
12 Undead haunt some areas but the locals respect and know them and even consider them kin

Obviously the boundaries in some of these overlap. Some might be natural allies at times other times enemies. Many would ally or fight the humanoid factions. Anyway make your trips beyond even the barbarian wilds to where man does not go more alien. Make your wildernesses horrible supernatural battlegrounds where a local guide can keep you safer than a weapon or spell.

My invasion table sets are about a classic rpg kingdom being invaded. I will eventually run them as a invasion a year return of the old races campaign. Will set more of my setting up so when I run it the breaking and change will be more interesting. It will leave the world a broken post apocalypse world of magic where humans villagers hide in dungeons then flee int the deep to escape, where humans are in retreat and rely on alliances to survive. Worse man could remember until recently was almost complete in conquering the world. Well the profitable bits anyway.
Posted by Konsumterra at Saturday, March 24, 2018