War With The Giants 2 Encounters and Wonders 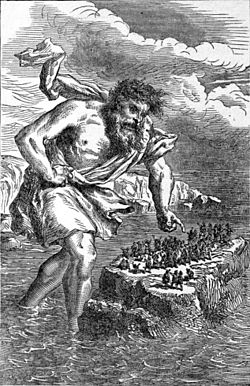 So those giant bastards are everywhere, tearing down walls, sitting in houses, using wells as toilets, eating your cows. Initially they send in the irregular dumb giants and ettins anf ogres with some orc warband scouts. Once humans organise resistance or larger defences are encountered the more organised giants appear. Once behind lines giants wander about taking as they please and you see more giant women and children joining in the fun. Giantesses are not weak or cowardly. If protecting their children they are worse than the men and more vindictive.

Some humans worship giants. Partly from fear partly some believe them to be their heroic scale ancestors. To them the giants are more kin than some of the foreign civilised gods. Some more tribal humans might even join the giants to ruin civilization.

The more advanced giants are more willing to conquer and accept surrender. Many of the giants even ogres will accept gold or silver to go away and consider this a yearly Tax. Some giants make a list of demands including food, youths, livestock and money. Tiny fiddly human loot my require human slaves to handle. Dumb giants like ettin and hill giants don't value gold only food and mayhem. If you don't surrender you may well be eaten and your town destroyed.

Overconfidence is a big problem for the giants and the dumber ones will be surprised often and fall back and form larger groups. Fire and Frost giants know humans can fight back.

When giants run amok your country will not be the same. Giants can with their magic and slaves and elementals can make major changes to a region and might even create obstacles to split factions. Rivers might move or flood, forests might grow, rifts might open up, hills might appear.

I should mention G123 and other DCC modules and fan made modules expanding the classic dnd module are available. I find G123 a bit boring. More sub plots and something personal like you know their prisoners would help. Once you've done that huge fight in G1 everything else is easy and you could possibly burn it down. Last time I ran it the party caused an earthquake to seal off giantland and marched on the fire giants with a army of all the mountain peoples they could muster in a alliance and demanded the leaders come out for single combat of every giant would die. They didn't feel like sneaking or dungeons after G1and2. Trying to split the tribes or other extra goals can help. I do think some Gygax stuff is ill paced and needs more work. I think D123 is better and more open.

Bonus New Giant Type
Bog Giants are greenish hued often covered in mud and have vegetation growing on them. They can hold their breath for hours and in swamps or water ways throw mud instead which can pin a human down. Live in small islands with wood and reed constructions and some even buid rafts. They are fairly dumb and often are surrounded by foul swamp odours. A new tribe from marriage between fog giant and sea giants but poorer. They dislike moving far from water and equally home in salty mangroves of fresh wetlands. One innovation they have made is to trade with serpentmen and lizardmen. Pet dinosaurs and giant reptiles like snapping turtles are the most obvious benefit. They also have been manifesting the reptilian taint in their blood line. Like most dumb giants they are irregular troops preferring open formations and skirmishing. Only in the war have they just been seen but after any that survive will find somewhere marshy even swim across a sea to find one. Their reptilian allies will aid them.