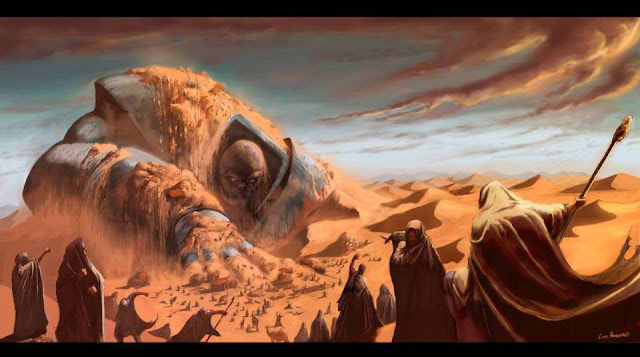 When the gods decide to terraform a hex and rewrite the memories of it's peoples they often begin by increasing the barriers on a hex borders and then softening up the region with disasters before a final apocalypse. Some will escape, others will find a bunker and hope the gods forget about them. Most are wiped out in the cleansing, their souls will be uploaded by the gods to be reused later possibly after the new terraforming complete.

Some heroes have manages to petition the gods for mercy but this might require visiting a god in their orbital or bunker complex. These could spur party to adventure or make them leave if they are getting too comfortable in a hex. A party might somehow avert the disaster too possibly helped by one god to subvert the will of another. Some might placate a god or convince them to preserve a hex for some unique feature.

Obviously players should get a warning.

d10 Warnings of the Apocalypse1 Prophet warns you
2 Character most beloved by the gods warns them
3 Petty god warns a greater god's plans to party
4 Encounter servant of a god known as apocalyptic herald
5 Animals silent and migrate away
6 Plants all enter unseasonal hibernation
7 Chattering servants of the gods let it slip
8 Strange dreams sent by a god warn party
9 Stream of refugees flee hex or enter a bunker
10 Strange auroras, star signs, talking animals and other omens