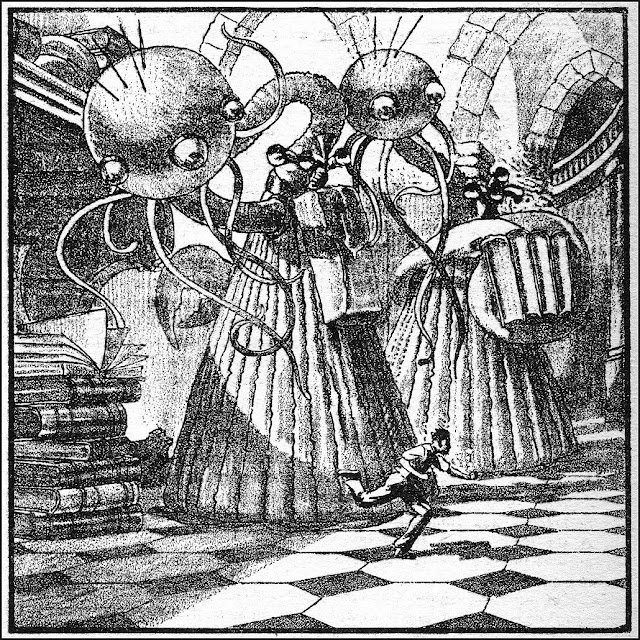 This zone is a mish-mash of lost world, land of the lost, hollow earth and H.P. Lovecraft. Most critters are reptilian with serpent men, intelligent pterodactyls, sleestak and reptile men. The odd grey and mythos being here too. Meshes with Alcheringa zone on borders. Meant as a break from typical dungeons with a dash of weird science.

Ill do a forbidden city inspired one and leave this for a while. Tempted to do a sewer zone, boiler room zone (freddys basement demonic horror). Consider suggestions but want to get back to some other projects. Wrote most of these while stranded without net in Adelaide.

Back to gammaworld game as of next week and some prep for upcoming DnD. Started some geomorphs for dungeon zones my slap them up here too.

Cyclopean Zone
A seeming endless sprawl of alien ruins, with anachronistic mix of species and hazards. A lost land with mostly reptilian species like dinosaurs, lizard men, draconians, saurian, sleestak, serpent men and dinosaurs. Other species dubbed greys and morlock have been discovered with advanced technology including energy weapons and robots. Some sub-tropical green zones, others more desert. Light comes from glowing crystalline rocks in ceiling that seems to provide plants of their needs. The ruins are hexagonal formed with crystal structures. Some argue multiple doomed races died here. Some talk of the great race that built this and ponder what killed them or drove them away. There are startling rock formations similar in Western Australia. It has been suggested the Great Race were time travellers and point to the strange temporal phenomena here as proof. Sleestack seem like a reptilian almost insectoid hominids who excel in primitive crossbow use but they seem linked with pylon structures that seem to control local phenomenon. Feral and tribal humans have been found here, including some missing children living in caves as savages. Strange xenotech and alien documents to be found.