Where is my magic sword caddy? 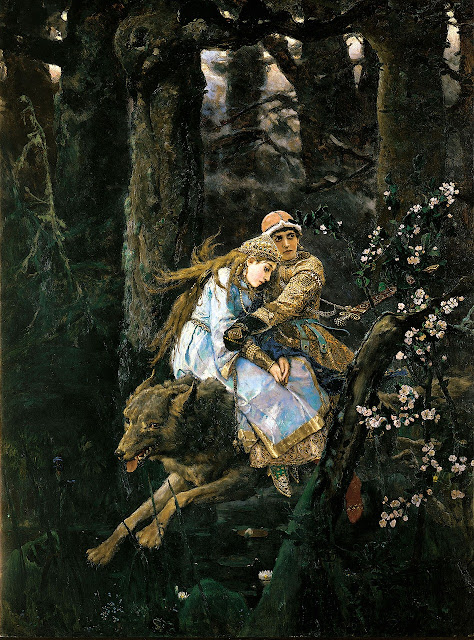 Dedicated to John G and Richard Ingram, Michael W and JB my longest serving players over 20 years each.

This image for Richard who became a Wolf prince in my werewolf ridden kingdoms of the frozen north sometime in early 90s. This campaign had characters one by one clearing evil from nations of the world - each menaced by monster minions of a different evil god.

In the first DnD campaign in probably 84 John G had a fighter reach about 5th level who had already had a collection of magic swords for all occasions. So he had basically a golf cart of swords on his back with specific bonuses for all occasions. We joked he needed a henchman sword caddy who could just hand him the one for the job. The first few items are exiting but when you get to another +1 weapon put it in the sack and sell it asap the feeling is over. Then you get a +3 weapon and ditch all those special +1+4 vs reptiles and other oddments.  Most players seem to fear intelligent weapons. +2 beserker swords make great gifts for that fighter henchman for hire with the +1 plate you want but dont want to be seen as the bad guys who murder henchmen.

Here are some of the other item possibilities Ive used over the years.

Alternative Magic Items
Normally cold iron and silver weapons are not so great on swords being brittle or soft so weapons enchanted to be as strong as steel can be nice low level treats. A sword with silver and cold iron magically fused is a nice treat too. A dagger that turns to a sword or a staff that can pop out a spear blade can be good concealed weapons. A spear that can shift from short to long to lance could be nice too. Staff with light spell on off at will.

A sword with a permanent illusion of being a puny stick could also give a bonus till the foe realizes it aint just a stick while a gelatinous cube wouldn't care. All of these are nice and can provide alternatives to +1. Also why not hand out some +1 daggers, hand axes and other items long before a sword appears. Quality weapons are nice too but price multipliers seem flawed in case of clubs and staves which cost bugger all. Javelins and arrows are good too. I'm seriously considering a spell to enchant a +1 one use missile spell in my game at the moment.

Armour with bonus only vs undead, reptiles, demons could be good too. Or +1 only at night, in sunlight or some other conditional situation. A weapon or armour which gives a limited number of uses per day or charges that can give +1 (2 charges for +2) could be a life saver too.

The classic foci wand or staff that lets you convert a spell level memorized into another effect is a great alternative to charges. Eg: convert my memorized feather fall to a different spell in  the wand like magic missile spell. For a Wizard this frees up other spells slots for a sorcerer this gives them another spell.

Intelligent but not very powerful items. Such items could even be quite annoying or even be more useful for advice than fighting. A item with a single field of lore expertise could be nice. Even something like augury sticks that advise only once per day or use a charge per word answer. An adventurers skull that answers one question a day. Or rambling crazy item that players have to take care interpreting. Book of I Ching good for this. Sound useful but really applicable to anything.

As Im reading Jack Vance at the moment, items which are living and tire or die if over used. Like boots of running that tire after an hour and possibly die if pushed longer (give them a con roll or saving throw).  An item that needs feeding or becomes dormant or dies. Gold or blood or tears or expensive wine all good.

Items that need something to make them work. Like a talking skull that eats gold coins to answer a question with a fee scale depending on information value. A weapon that must be bathed in human blood every morning to work. An item that requires a ritual to recharge like a fireball wand that requires a sacrifice for one use.

Daily use wands are good too - kind of superior or inferior depending on your take. Items that require 8 hours meditation to recharge one use or needs to be recharged like a spell caster needs to study or prey to prepare. Very handy but annoying.

A weapon that has an evil reputation yet is actually neutral. Every orc feels obligated to kill the wielder. Elves hate whoever uses the weapon even briefly. A weapon used in a massacre or by an evil warlord. A clan seeks to destroy the item for some black deed in the past. A dagger used to sacrifice a thousand virgins by an evil wizard but is just +2 make others suspicious. The weapon is maligned by its rep but might be worth hanging onto despite the trouble it causes. Only evil persons want to buy the item.

An unreliable intelligent item that provides right answers 50% of the time.

Unreliable item works 50% of the time. Or only works when the stars are right or some other situation.

Needs something like elf tears to activate abilities each new user.

A weapon that refuses to cut certain beings like good persons could have many interesting uses.

Powers only work if user right alignment. Common for swords but consider for wands, armour, shields.

Items that work but benefits questionable. Casts light or silence but targets the position standing in by user only. Summoning devices that summon beings but doesn't make them your friends automatically.

Items which have cool powers that draw on beings from another world who watch all your actions. A mace that isn't evil but Orcus can see you and might warn his followers of your location. Items that commune with possibly hostile beings that might even lie or tell truth till party trusts then sends to doom or to commit act of evil. Beings might insist on favours to use powers. Teleporter ring that wielder gets a quest every time it is is used.

Item works only for those that fail to resist quest built into item.

Item only works if correct bloodline or religion or school or race. Possibly marriage might count as bloodline but you have to get married to find out.

Powers only work when user reaches a certain level. This is my favorite and means a cool item can grow with the hero. Great for legendary items and has character keeping that item in hope of releasing new powers. Could have a number of above problems also.

The Black Helm of Darkness
A polished dark grey steel helmet with 10 black onyx stones. Brought to world by god of darkness to teach humility to heroes of old. Powerful but questionable in utility at times. As user grows in power a gem conveys sense of new power but unknown till tested. Ivanavitch the wolf lord rode his magic horse to safety after summoning powers used to sew mayhem among foes. To activate each power 1d6 hp of blood must be spilled on gem. You cant pick and choose which.
1st level - night vision
2nd level - +1 saving throws
3rd level - can summon a shadow hound once per day (as shadow) attacks any target including summoner
4th level - +1 AC
5th level - cast darkness 30 ft radius from position once per day (user as blind as anyone)
6th level - sense shadows and beings of living darkness within 120 feet
7th level - cut self for 1d6 damage can command shadow hound (once per day)
8th level - get a save vs death for level or stat draining effects (magic not poison)
9th level - heals 1hp per hour at night (12) though some planes night may be longer
10th level - call shadow pack once per month - 2d4 shadow hounds, hostile to all including caller
other powers rumoured but most users died activating last power

Hammer of Pain
Every time this is held the wielder feels jolts of sharp pain. These increase when a victim is slain. Made to teach a hero restraint and mercy instead has made many wielders masochistic sadists. Black metal with demon hide leather hand grip, haft carved from a monsters horn. Each level wielder makes a Wisdom roll to resist becoming addicted to giving and receiving pain.
1st level - Wielder immune to sleep while held, makes a great watchman
2nd level - +1 attack and damage
3rd level - hold person once per day on on victim struck
4th level - springs to owners hand on command if within 30 foot
5th level - +2 attack and damage
6th level - +3 resist paralysis and pain
7th level - hammer can shrink to charm bracelet size
8th level - featherfall effect for wielder
9th level - +3 attack and damage
10th level - beserk once per day +2 additional hit damage for fight duration, attack any in sight, this bonus is from rage and doesn't add to hitting magical beauties
Other powers are rumoured but wielders usually killed by friends at 10th.

Wand of Tsanjezzeroth
Made by a wizard using part of his own soul according to practices long lost. The wand glows when first touched by a wizard. A single ivory splinter from a narwhale horn. Craved by many spell casters who wish to tap its long lost secrets. A manual of instructions with missing last few chapters has been found and is kept by such a wizard. Several copies exist some detailing only first three levels of power.
1st level - wand glows 30 ft at will
2nd level - fires a single magic missile per day
3rd level - victims saves-1
4th level - +1 on spell damage per dice
5th level - fires 2 more magic missiles for total 3 per day
6th level - touch range spells can be cast with 30 foot range
7th level - memorize/cast one more 1st lv spell
8th level - memorize/cast one more 1st lv spell (total of 2)
9th level - memorize/cast one more 2nd lv spell
10th level - Read magic at will and once month ask Tsanjezzeroth a question
other powers are rumoured and thus many wizards want the wand to know for them selves
Posted by Konsumterra at Friday, January 11, 2013