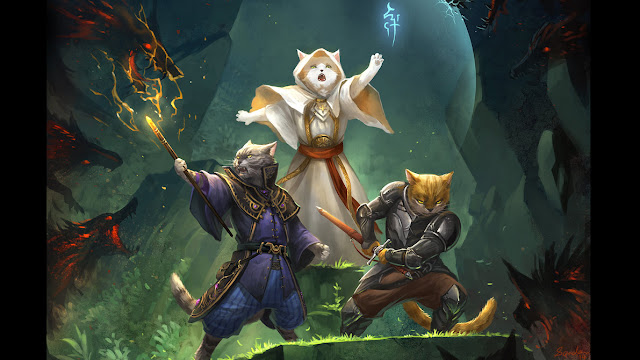 A Cross between English pastoral romance animal fiction, LOTR, furries and adorable fuzzy animal race. Possibly include plant folk and tree and bush spirits. Wind in the Willows meets Pan only with more stabbings. It kinda has cute animal folk but mixed with DnD murder hobos and supernatural horror. Nasty adventurers and bad animals and bandits are only about 5% of the population. Things are mostly syrupy sweet but when you find a gagged and bound my rabbit with ritual cult mutilations in his diabolic robes hanging from a street sign it makes for good incongruity and all the more and horrible.

This could be a plane to visit, a big island, a exotic region or a whole setting

Firstly No humans! No dwarves, orcs, halflings, goblinoids!
Possibly faerie folk but they look like humanoid animals with bug wings
Mostly based on smaller animals

Dogs = fighters, possibly barbarians, rangers or paladins
Dogs are lawful and mostly good, but some mad bad crazy dogs are LE or CE or NE
Good dogs always want to reform bad dogs but good dogs will kill by necessity if pushed

Cat Folk = elves or thieves
Cats are crafty, sulky, hedonistic, and vary in alignment. Cat matriarchs usually keep the order but cats like fighting and mischief and drunkenly sing all the way home from pub at night. Cats are scallywags and vary greatly but most of the ones you meet are good and they are good at dealing with rats. They have a love hate thing with mice and clash with dog lawmen.

Rats = thieves
Not all rats are bad like river rats or shrub rats but the tunnel rats and the dark woods black plague rats are definitely minions of evil and serve the plague god.

Mouse = hobbit or cleric
Mice are cute and like home comforts and live inside giant brambles so others don't eat them. They can be quite crafty and brave.

Rabbits = thief or wizard or cleric
Rabbits are a bit hyper and mostly good but they do employ traps, tricks and surprise to terrorise enemies. Some have a affinity for magic.

Hare = thief or druid
Hares are like rabbits but are more solitary, weirder and don't burrow. They also can be quite mean to rabbits and are a bit more savage.

Guinea pigs = halflings
Exotic immigrants have settled in nicely and often co habitat with good rats, mice and rabbits, they like to use bolos and atlatls and slings and grow their own exotic garden vegetables which sell well.

Pigs = fighters or rangers
They can be jolly and like to feast and hunt and forage. Some are evil brutes turned to evil and chaos

Fox = thief
Murderers, bandits and cut throats, most birds and small animals fear them. They lie and cheat to get you in their houses to kill. Some are ok and use their cunning to help community. Robin Hood was one such fox.

Duck = thief
Ducks are good but kinda dumb and impulsive. They are mostly good but easily anger and do some dumb things

Badger = dwarf
They are the strongest fighters of the underwood and can be good or evil.


Beaver = druid or cleric
Beavers are awesome guys and do most building and carpentry, evil tainted beavers help build walls and forts for evil

Wrens, Starlings, Pigeons = theivesMost small birds are good and a bit cheeky, pigeons and doves are more wary and a bit dopey but still thieves

Otter = thief
Otters are awesome fun guys who often work around water or run mills or rent boats or fish.

Squirrels = theif
Squirrels are sneaky ninjas who like to hoarde and snatch things. Red, grey black and gliding types are about.

Frogs, lizards, even fish are possible too.

many types of giant and non sentient animals are a problem like giant eagles. 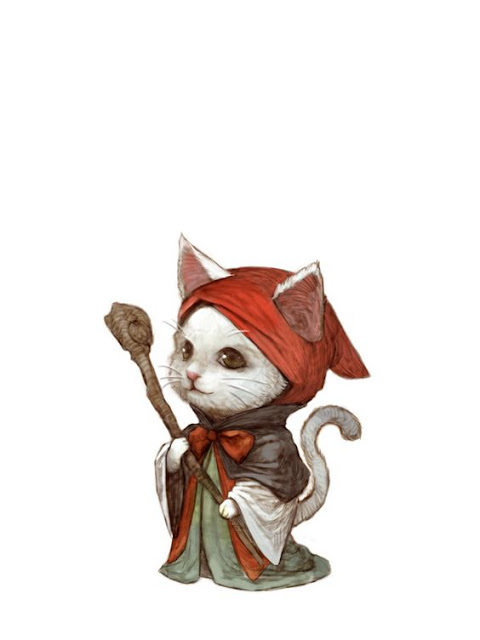 The above worlds is forests, hills and gentle grasslands. idyllic and where animal folk live in tiny tree cottages of mushroom houses or giant logs all with adorable curtains and little pot bellied stoves and tea sets. The villages are mostly anarchic, communal and each home has a cottage industry.

Some woods are dark and scary and full of weasels and tough creatures only go there
Ghosts, ruins, gangs and bad people hide there it is always a scary adventure

Creeks and water ways and lakes are nice for fishing and have different animals. Some swampy scary places are home to creepy animals like swamp rats

Underwood is a network of caves, mines and passages connecting burrows and tunnels dug by races since the dawn of time. Many are full of kingdoms like mole men and badger men and rat men and weasel men who argue and fight mostly. Most people dont realize the underwood is so populated and war like. Sensible upworld animals avoid it.

There are also undead animal kingdoms and kingdoms ruled by evil animal warlords or wizards or priests. By kingdom they probably mean 30-100 animals in a village or possibly for the underground ones up to a thousand animals. These fight other kingdoms which stops self important monarchists taking everyone over and charging Tax. Free animals don't pay tax.

It's kinda a mystery how the economy works exactly and nobody cares about anything more than a hundred miles away. Many animals make things and trade at cottage industry scale. Wandering tinkerers travel days away to swap goods from far away and visit often. To the south there is a sea shore and a light house and nice fishing villages of seagulls and puffins. People go there for a holiday (kinda like Cornwall). If you could somehow breathe underwater for a while you could have a underwater holiday in the fish folk world that is a weird version of the surface world with intelligent sea folk everywhere. Its one thing to hold your breath or be an amphibian but true marine life can walk and talk and move as if they were on land which breathe water spells and potions imbue.

Bad animals are aplenty to fight but some enemies like monsters are created and summoned by magic  makers. Evil magicians are Ebon Bindings and Carcosa and Elric type weird and evil summoning. many monsters are called from the otherworld and dont want to return. Good animals uproot evil and kill it.

Many demons look human or humans with coloured skin and possibly tusks and claws and wings. Dont trust them. Possibly gnomes might work and most human like critter in setting.
Posted by Konsumterra at Monday, October 24, 2016