Happy Halloween To Me 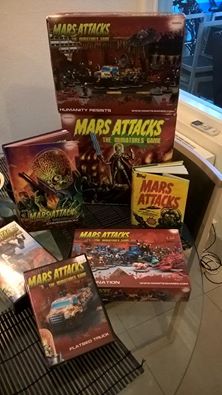 So i had mars attacks game and extra set of walls (actually i got wall first then was so happy i got game). I got compilation rule book hard cover first. I had the lil yello book reprinting the cards and recent mars attacks art. Im a big stormin Norman Saunders art fan and have a hardback fat book on him.

So recently i got a incredibly unreasonably good deal on a bunch of accessories in a quiet bit of shop shelf space. I thought i had gotten parhaps 200 bux in value and was wrong. It was more like $600. So thank you kind benefactors.

So I have a huge stash of most of range (no cripples & lame humans or burning cow sets though which replace card ones in box. I should get. I possibly lost a pack with helmets but only single helmet packs for a bug director.

Ive been a 1/72 man mostly with 25/28mm being rarer in my stash. Mars game has me more seriously committed to 25mm. I some hero quest bard game minis. Star ship troopers arachnids. This game got me collecting expensive replica dinosaur figures which has progressed over the year so i could play Dinosaurs attack variant of this game. I has lotsa dinosaurs now. Doh.

Dinosaurs and animal and other monster  or even robot figures are are great. I can practice drawing them too. Many monsters are handy for both scales. I also have a few hundred heroclix nowadays soon so they are a good crossover. Maybe do marvel or DC vs Mars Attacks. It might be good to make alien figures that are to be human allies in game could be more exotic mercenaries serving the Invasion. Of course the early DC crossover in early 80s called Invasion was a Mars Attacks rip. I cant remember which company but I think mars attacks attacked some smaller comic line universe. I have a good heroclix scale batmobile too.

When playing marvel and building a city i am less fussy with scale because Marvel is like that. I use tiny train scale civilians and motorbikes and use hotwheels and matchbox toys. Works pretty well. Toy cars good for Roadwars games to as are lotsa giant aussie animals. There are several kits online to sex up toy cars with guns at my toy car standard size and close to 1/72. Have some DnD monsters once again chosen to work in different scales. Have some good terrain bits. Im gonna set up model making again.

Minis I hope to afford again one day include some brit plastic sets of post apoc men and women and zombies with variant parts that would work well with mars attacks.

Found a cthulhu mythos mini game which would expand my cthulhu wars and has 25mm investigators we use in our Cthulhu campaign.

I could do a huge game of mars attacks with these factions.

Am gonna study and looking for new local job. As lack of qualification in my current work is hampering me im going to study a bit. Bosses pretty flattering butlotsa over qualified ppl applying unskilled version of my job. I have 3 degrees this job doesn't count. Hanging with my visiting niece from West Australia. Dads crook and giving me his exit plan as he is 80 and has 2 fatal illnesses now. He plans to refuse treatment. So I might have to go back to South Australia and sort out stuff and move there any time over next two years so im a bit loosey goosey about future but im pretty ok. My niece is great maybe i can platy martians with her and my flatmates. I have made her dress up as two separate unicorns since visiting and we have had some memorable adventures together in last week.
Posted by Konsumterra at Sunday, October 23, 2016