Wands and the magic animals that steal them 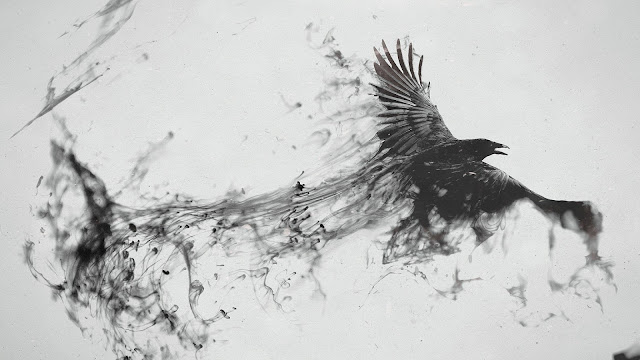 Archravens
These thieving birds love magic trinkets but need wands to build a nest. Only a few will live in hiding near wizard common areas. Possibly they were bred to find lost wands or to rob apprentices performing silly deeds with cheap common cantrip wands. Some of the greater archravens possibly recharge dead wands or even make them.

Possibly created by a wizard to remove cheap wands from kingdom. Or chosen of a god or possibly a by product of magical pollution.

A raven nest requires at least three wands. Mother Archraven can fire off each wand in a round if she sits on the nest. Father archraven protects the nest and leads the older children to battle. He can also copy spells he hears being cast and cast them back.

Dad can cast spell levels equal to his HD per day. He can copy any overheard spell he has heard that day and recast it. He can only remember one spell beyond a day at a time and can always use it. If he hears a better spell he can call that his one spell.

At six wands mum and dad can use arcane skills and rituals to restore a charge per day. Given a month they can make a wand from dads chosen spell or copy a existing wand. It is easier to make a cantrip wand than a better spell and they are lazy. It takes a week to make a cantrip wand and a month per level for greater spells. The do this when the colony needs to split.

At seven wands children will leave nest to start a new colony with three wands. The detect magic items at will and can spot a spell caster. The nests have arcane patterns and parent birds demonstrate unusual magical skills to identify wands and use them. Any family member can use a wand and they might each take a wand and fly away if they have no eggs and are under threat.

Normal ravens contaminated by magic and stealing a first wand might change the whole clan into Archravens. They need at least three to get the basic powers and stats.

Some have managed to trade wands but they are not easily tricked. They prefer two weak wands to a more powerful one that has little use to them. Offensive wands are the most desirable. Sight of a new wand gets them cawing and croaking.

Most wands are petty ones that cast cantrips with 1in6 chance per wand of a superior wand.

Archbeavers
Build dams from magical wood woven into sigils which grants the beavers and their dams magical power. They are magical awakened when beavers gnaw on tasty magical wood like wands. Similar stats to giant beavers but their dam stores magical spell energy levels and the leader beaver gets extra powers of Raise/Lower water, wall of water and create wood golem three times a day. 2HD wood golem servants and guards are a important part of the beaver community. For every ten yards wide of magically woven wood the beavers dam has a spell energy level. The beavers draw on this to cast spells as if they were casters with levels equal to HD. Different beavers cast as clerics, wizards, druids and sorcerers.

Beavers will integrate found magic items into dams especially wooden ones. Effects of these are inconsistent but grant all beavers in family a benefit. A +2 spear might give all beavers a +2 in combat. A wand could be fired in defense by the spirit of the dam. The dam is regarded as holy and alive with it's own spirit. The wood golems are a part of the dam. Angry beavers might prepare a army of golems to  gain magic items or protect the dam or foraging area or river. Druids often place additional defenses for dams. Frog and toad folk might also protect the dam. A Archbeaver dam might go to war with a village over water rights or resources.
Posted by Konsumterra at Thursday, September 08, 2016