Saltflat jet and rocket car racing is pretty exiting and big budget mostly corporate teams. Some are sponsored by space agencies. Murder racing made it international TV and even bigger batches. Seeing missiles soar over kilometers and cars shoot of track and explode in a cliff is awesome. 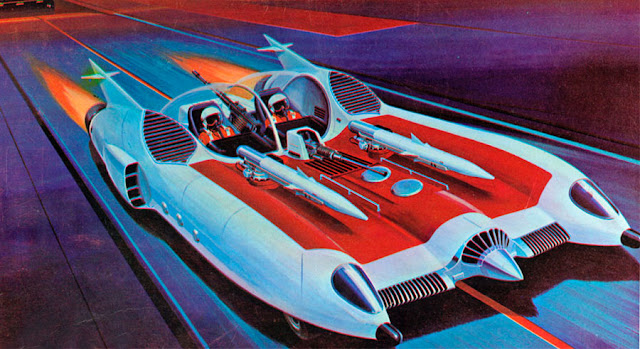 Jet and rocket cars influenced other high performance cars and death racing. This baby has two large missiles and a .50cal machine gun. There is a medeum laser on a swivel mount facing rear. Chromium jet age retro sf look to get camera attention. 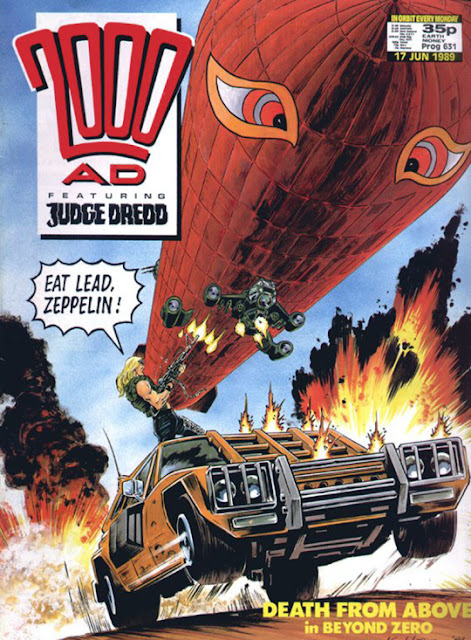 Airships travel so high most ground fire cant see them. Some are used as troop transports. Not as big as the 10 000 man airship bases used in the zone wars but Australian military have some with 2000 man bases. Typical desert raiders like this intimidate small communities to surrender to be robbed them. They might also drop 20 paratroopers to perform a surprise attack. Some sky pirates are using designs with prop planes or ultralights. 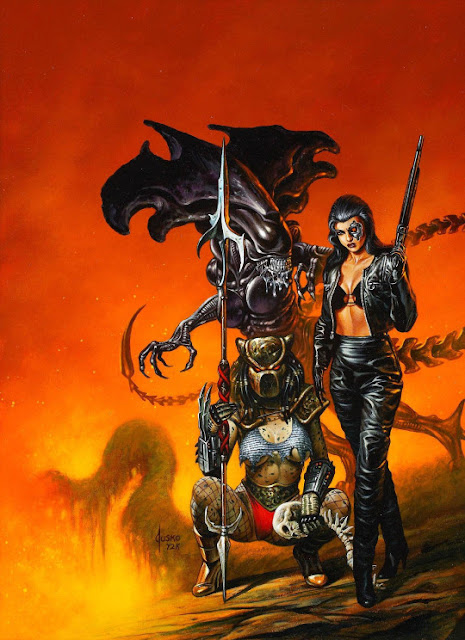 You meet all sorts in the waste. Cyborgs, mutants and aliens oh my. You would be disappointed if it turned out they were just millionaires jacked into android bodies out for kicks. 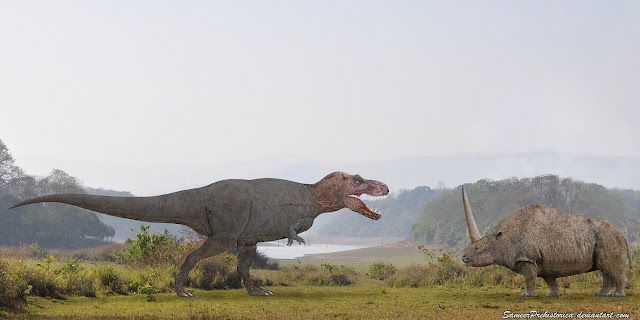 Genetic reconstruction theme parks were all the rage from the late 80s but most shut down and their automated facilities have let some species roam free. Here Cretacious Park and Piestocene Green exhibits meet 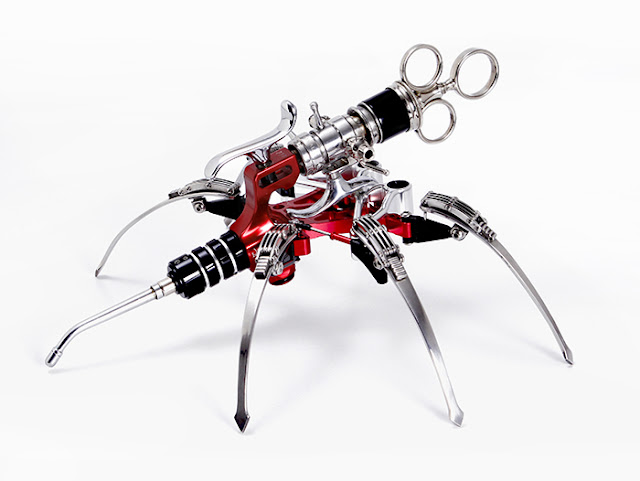 Drones are getting smaller and more hive like. A Necrotech surgery drone team of six could handle emergency surgery in extreme conditions. The can be hacked and turned into assassin drones. They are a byproduct of space and military tech. 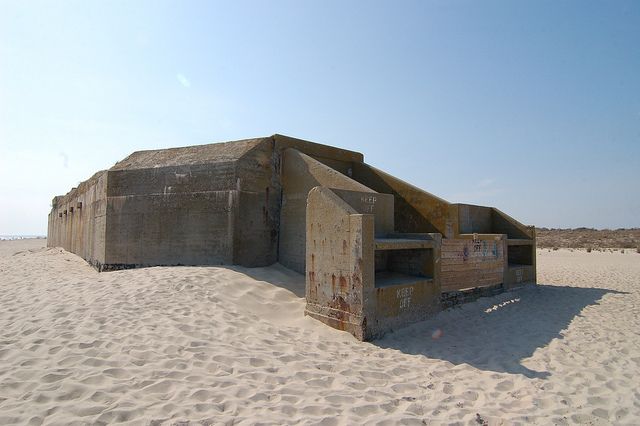 Bunkers like this dot the coastline after the 80s zone wars. Australians killed millions of refugees in famous "battles". Ruins of these bunkers still contain chem weapons and many are now mutant gang headquarters. Some rare ones have space for hundreds below the surface for nuclear warfare. 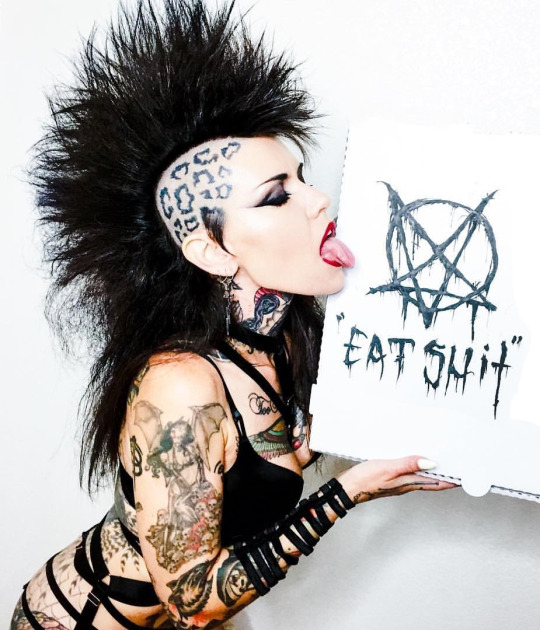 Punk never died in the 80s, it just got worse. Gangs rampaged arounf poor suburbs and the outback for thrills and territory. When the urban walls went up they were locked out. The rich glitter punks of the inner city are soft and fake. Most become suits when their teen years expire or the trust funds get empty. Punk gangs even broadcast their own tv channels with bands, nihlism and anarchy talk shows, punk porn and best gang murders. They also have own coverage of death races and encourage terrorist attacks on legitimate honest racers. Punks also hack the gov and corp data banks but their trustworthiness suffers from gang and cult dogma and conspiracy theories. Possibly 30-40% of the population are punk with even tribal punk clans. 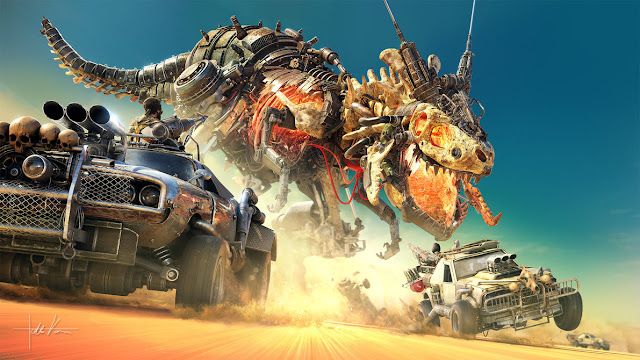 Robot dinosaur battles are a new event with teams vs  cybersaurus. Various contest modes exist including harpoon and capture scenarios. Cheaper than real dinosaurs for the corp TV events. 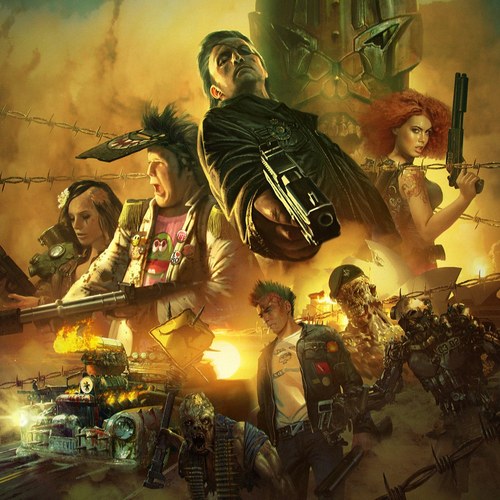 This art and following is from Waste Knights which Im increasingly interested in. Has lots of spot on art and world building hex building fun. Seldom I see a game that screams movie please. 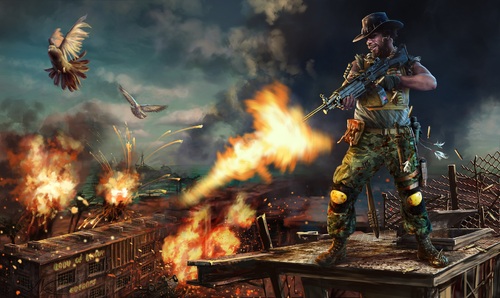 Walls with look out towers are common defenses with car traps, pits, metal spiked posts, concrete pillars arranged to make car entry impossible all help fortify a town. They also act as cover for ground troops. Towers are very useful with a sniper or rocket defender for extra utility. They are obvious targets however. 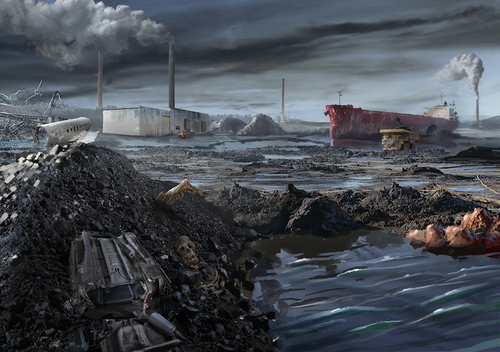 Many areas are industrial wastelands. 80s era slag heaps of open cut coal, chemical waste, garbage, and miles of tidal muck. Only most secretive cults, desperate gangs or secret black labs would operate here. Hazardous for any surface or wet vehicles. Hovercrafts even risc tearing or damaging their skirts. Mutant crustaceans, protozoic colonies, crocks and squid things lurk here. Fishmen especialy enjoy human free habitat and water access. There is plenty of loot in containers to be found on warfs and warehouses and factories. Some manage to fortify and operate a factory and even grade a debris free route away for trade. I wish this pic had some tires. 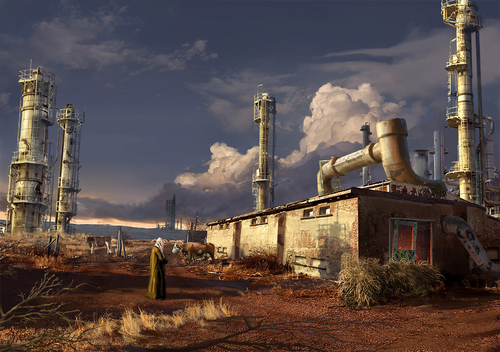 Refineries are a important resource processing massive amounts of fossil fuels and bio fuels. As these plants can process anything organic the areas around them becomes desertified. The biofuel converters some cars carry process road kill and scraps reducing need to buy fuel. You can always spare something organic to get some fuel. The military use them in trucks to support other vehicles and to process mass enemy graves into fuel, thus reducing war crimes.. 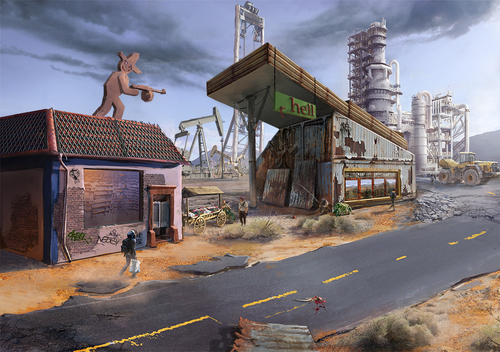 A store with a garage near a refinery and a gun shop are the minimum need for a long range murder racer. Some food to eat and perhaps a chance to trade or drink help the hospitality. Careful you don't take food from cannibals while in the country. Plenty of ruins and trouble everywhere, opportunities to die in a blaze of glory or build something to stand against the entropy of the waste.
Posted by Konsumterra at Wednesday, September 07, 2016