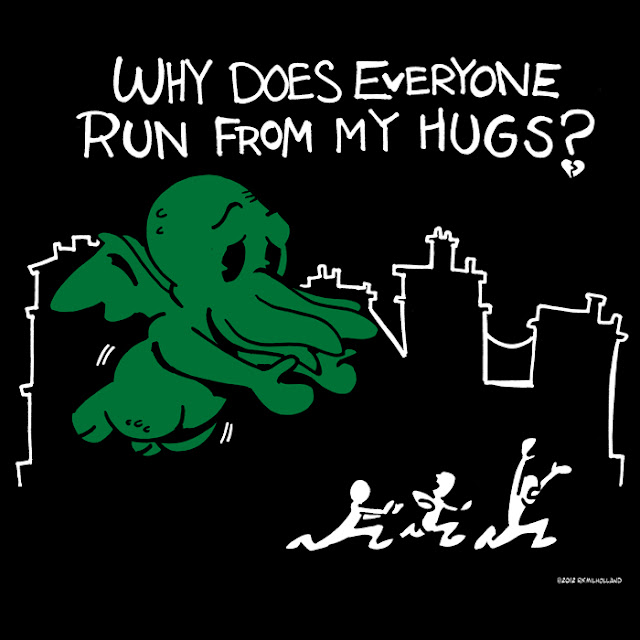 I'm a bit miffy because my win10 laptop reloads tabs constantly and lost 75 evil farms i described lovingly on a 3 and a half hour bus ride commuting interstate for work. Not in writing mood since then. Have big job interview friday which might fix my life up and end my hellish travels and living arrangements. Playing last few rooms of ASE and 5th ed cthulhu fridays and going to run my Murder Highway game for two saturdays. Gonna work on some generic drivers and cars for drop ins and as examples.

Anyway here is what I have to say about Cthulhu 7th ed I have been reading loan copies. Despite what I say here I will definitely get the Pulp Cthulhu Book physically and possibly the keeper and then the investigator books. This review is more like bullet points so far.

More complex than previous editions but possibly more complete with many more character options and history. Extra stats to care for. I don't like the stats being x5 old rules - i rarely used idea and knowledge rolls or luck rolls in previous editions. Monsters now have unwieldy huge numbers. I can live with it but i keep feeling like im playing tsr d100 games. Slightly annoying i cant swap monsters from brp products as freely.

Mostly 1920s i think could have not bothered with modern sttuff and saved for another book - no attempt really at gaslight era. I will have to get last gaslight book as my box set and 90s book stolen and I hated the sherlock stuff (but i like rat things). Possibly a players book for each era would work.

So many differences it is another game. Not really BRP anymore. Feels like a liability to have played old game to learn this one. Im sure many mistakes will be made by old players and awkward moments will happen.

Very complex and over written for new players or gamers. Over the top in places but some good suggestions and explanations. Biggest complaint I get from non chaosium HPL gamers is that it is too complex. I should have seen that bit on avoiding playing racism and sexism too historically before my current anti catholic character. Some concessions to modern trends in mechanics and design.

Great art and layout. I dislike the full colour cofee table RPG book style but this is one of the best ever. Overdesign has not harmed readability and more games could be like this. Great artwork and photos. lots of content in keeper and player book repeated. Without repeats and adventures could have been one book. Thank god they dumped the moth eaten buggy pages that made readability suffer. Solo adventure would have been nice they should do more and re release old ones. I remember old scenarios only a few pages - modern ones seem wordy, too complex, too many monsters. Marketing wise the new ed feels like 5th ed dnd a bit or aiming at the larger gaming audience. The art alone is very tempting. Im more impressed than I was by the the monster field guide.

More stats to record - spendable luck points I think it makes me feel less helpless. Which spells utter failure for horror setting. Every new edition has made easier to survive and this ed feels more pulpy. Adds complexity i would happily not have even though the mechanics are ok. I liked optional magic points rules in brp that did a lot of what luck does in this game and would have been simpler to implement. Having more uses for magic points would have been good. I get the feeling this mechanic a bit of a story gamer touch to make players feel in control more which I think makes less scary.

The pushing skill idea that you can re-roll some non combat skills for a second try but risk disastrous failure if you don't make it is really good new mechanic. I don't really get or like the bonus dice and new skill opposition system. I might get it later though. Seems a concession to modern games. I still like the old resolution table.

Ads nothing really new to mythos - stuff in old eds like hpl npc stats gone. I do like the spell section and ideas on spell failure and variations. A few good things in the mythos book sections. Changed the classes of entities so no more lesser independant races.

Lots of good spot rule ideas I might use in my other BRP games and older Cthulhu games.
Healing different and ok.

Credit rating is greatly improved and more obvious feature of game.
All unarmed damage 1d3 no martial arts. Actually I like this. I did use a gangbusters/top secret SI based non lethal damage system in my game that made fist fights less deadly. This might be simpler. No more muscle bound martial artist guys doing 3d6 kicks to poor mythos monsters.

Tommy guns 5 times too expensive and harder to get than reality contradicting the text and history books. Listed price is $1000 black market. Funnily Pulp Cthulhu has the 1921 price, more like $200 in 1921 and $228 by end of decade. Ridiculous conceit about Tommy guns after text states purchasable from sporting good stores not through black market as stated in gun stat block. Better ways to control over kill weapons. Brits returned thousands of drum mags to USA for being too noisy and rattling which is a great indicator big drums have problems and suggesting a way to make them liabilities.

Taping two 20 round box mags together deemed more reliable for quick change, later on versions with mags welded together used by military. I had player turn up with a 1920s ad for surplus BAR at low prices. It is kind of ridiculous to make these weapons too hard to get. Tips for dealing with this would be better than crazy prices. Ive seen images and films with Lewis guns used by explorers so getting military surplus stuff in some places more permissible.

Explosive damages all raised to TPK strength and more useful for monster destroying.

Actually with the cthulhu pulp book all this works better somehow. Id rather play the new ed as a pulp cthulhu campaign. This book makes the new edition shine. Much better than the BRP pulp book but that might work better with this book too.

I will still play older version probably 1st ed. Despite all these grumblings I am more likely to play 7th ed now than I was when I heard of it and when I first looked at the books. Possibly all goes back to getting home from con with 6th ed leather bound to hear news that 7th was in the works. Hopefully this doesn't happen again.

Laundry might be something i get more and will snap up all the cthulhu now stuff i can while on shelves. Good ideas from 7th ed will filter into my brp home rules.
Still hoping Chaosium and Moorcock beef will be resolved.
Posted by Konsumterra at Wednesday, September 21, 2016